At The Intersection Of Time And Eternity: Lent

At The Intersection Of Time And Eternity: Lent February 6, 2016 Michelle Van Loon

Jesus answered, “How can the guests of the bridegroom mourn while he is with them? The time will come when the bridegroom will be taken from them; then they will fast. (Matthew 9:15, Mark 2:19-20, Luke 5:34-35)

Lent was a word once commonly used to describe the lengthening days as winter moved toward spring in the northern hemisphere. Today, it tells a very specific story about the forty days leading up to Easter on the Christian liturgical calendar. Lent begins this year on Wednesday, February 10th. The first movement of the Lenten season takes place on Ash Wednesday, which offers participants a sobering way in which to respond to the beautiful purity of God with repentance. The day sets the tone for the entire Lenten season.

While some Christian calendar events like Easter and Pentecost have their origins in the Jewish feast cycle, Lent developed entirely from church practices. Easter was the primary day on which baptisms were performed in the early church. The preparation period leading to Easter incorporated fasting and instruction for those who were planning to be baptized and join the church. Church leaders and members joined them in this period of self-examination and self-denial in order to ready themselves for the high point of the emerging religious year – Resurrection Day.

Lent has had a position on the Christian liturgical calendar for more than 1,500 years. In recent years, growing numbers of those who attend churches not tied to this calendar have adopted some form of Lenten fasting as a personal formation practice.

The Jewish festal cycle and the Christian calendar each offer holidays that are meant to serve as an on-ramp into the intersection of time and eternity. These moments and days point us beyond our own everyday agendas and connect us with our place in a bigger, more beautiful story. I’ve been blogging a 5-minute intro to each major holiday and season in both the Jewish and Christian calendar. Today, a look at Lent. 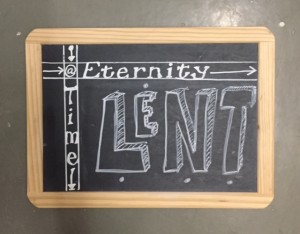 One of the passages often read on Ash Wednesday includes these words from Joel 2:13: “Rend your heart and not your garments.” The corporate and individual nature of Lenten fasting affords believers a way to focus on humility, self-denial and repentance before God.

Historically, the fasting practices associated with Lent have called for adherents to abstain from meat and all products coming from animals including milk, eggs and cheese. This kind of fast was reminiscent of Daniel’s “vegetables only” fast. Over time, strict fasting rules have been relaxed, though dietary restrictions are still a cornerstone of this season of the church year.  Many streams following the church calendar ask members to participate in a full, no-food fast on Ash Wednesday and Good Friday. The (Eastern) Orthodox Church encourages members to abstain from food for the first three days of the Lenten cycle, then maintain a spare diet throughout the rest of Lent, with a few key feast day interruptions to the fast.

Others following the church calendar don’t prescribe specific practices, but instead encourage members to fast from something that’s gotten a little too important to them during this season. This fast can include anything from use of social media (a fast more difficult for some than exorcising meat from the diet!) to abstaining from sweet treats. Others have found it meaningful to include an Isaiah 58 focus on doing works of justice and mercy as part of their fast.

In the Western Church, Lent is observed for the forty days leading up to Easter. Sundays, which were the early church’s weekly first and central way in which the resurrection was celebrated, are not considered part of those forty days, though many people maintain their fasts throughout the entire period from Ash Wednesday through Easter morning.

Forty is a significant number in the Bible. It usually symbolizes a period of trial, training or testing:

The profound symbolism of the number forty wasn’t wasted on leaders in the early church. It was was a formal way of naming the season they’d grown to observe as they readied for the yearly Pasch (Easter) celebration.

Disciplines of abstinence, such as fasting, puts us in touch with our deepest hungers, pointing us toward the only One who can satisfy them. Lenten fasts are meant to bring us face to face with our soul’s emptiness. In a divine paradox, as we seek to be filled by him, we’re freed to be used of him to pour out his love on his hungry, thirsty world. It’s a profound way to walk with Jesus into the final week of Lent, known as Holy Week.

Lent is not a self-improvement program. Though the discipline of fasting may help us shed a few pounds or break a bad habit, this season of the Christian year isn’t about us. The goal of Lent is to orient our souls toward Jerusalem, where we’ll  follow Jesus through the last week of his life. Lenten discipline prepares us to immerse ourselves into the life of Jesus during Holy Week.

A few resources I can commend to you if you’re wondering how you might begin to observe Lent this year:

Between Midnight And Dawn: A Literary Guide For Lent, Holy Week, and Eastertide complied by Sarah Arthur

Helpful round-up of Lenten resources for individuals and families from the Evangelical Alliance of the U.K.

February 4, 2016
We Don't Age Out Of Our Sexuality
Next Post

February 10, 2016 Review: What Every Christian Needs To Know About The Jewishness Of Jesus
Recent Comments
0 | Leave a Comment
Browse Our Archives
get the latest from
Evangelical
Sign up for our newsletter
POPULAR AT PATHEOS Evangelical
1