Praying For Healing: Advance Or Surrender?

I’ve attended churches that didn’t believe in supernatural healing: “Those kinds of miracles occurred in the first century, but God doesn’t do that any more now that we have the written Word of God. Except maybe once in a while for missionaries living in far-away places.” Prayers for healing among these folks often took the form of asking God to guide the doctor’s hands during medical procedures. Interestingly, many of these people who didn’t believe in supernatural

healing were into alternative health practices and fads in the form of scrupulously clean eating, homeopathic remedies, a host of expen$ive practioners selling nutrional supplements, and all. those. people. hawking essential oils.

I’ve attended churches where the people that expected God to heal here and NOW: “Signs, wonders, and miracles accompany the proclamation of the kingdom. Jesus said we would do greater works than he did. We just have to claim his promises.” If a person didn’t receive healing, it was because:

(A) There was sin in his or her life.

(B) There was a lack of faith on the part of either the sick person or the people praying for healing.

(C) There was negative confession; in other words, the sick person was speaking curses on him or herself because the individual was focused on their disease instead of God. The tongue has the power of life and death, after all. Walk in victory! By his stripes we are healed!

During our years in Charismatic churches, I once heard a very frank statement from a leader in the movement. His wife was dying of breast cancer. People were surrounding the couple with prayer, and his crew was persistent in seeking a miracle for her. He believed in God’s ability to heal today, and yet, he admitted that watching his wife slip away was rearranging some of his theology a bit. He threw up his hands partway through his talk about healing and said, “We Spirit-filled people stink at suffering. We just don’t seem to have a category for it.”

I’ve been sick – big sick – for several weeks. Bronchitis morphed into a rotten case of pneumonia. I’ve received prayer from people in both camps, and I’m grateful for the care. Collectively, these people have carried me to Jesus, not unlike the account of the friends who carried the paralyzed man to see Jesus, de-roofing part of a house in the process.

These prayers have caused me to reflect a bit. (Plus, I’ve had nearly four weeks of mostly laying on the couch, which has given me time to think when I’m not watching bad news, home remodeling, ancient game shows, or Mother Angelica re-runs.) My years with the fundamentalists and conservative Evangelicals immersed me in a world where prayers for healing were often cut through with a dogged fatalism and little hope that God would miraculously intervene. While in that world, I also got to know some amazing saints who demonstrated incredible perseverance and faithfulness in the face of physical suffering.

I’ve experienced a shame- and superstition-based expression of faith in one’s own faith from my Charismatic and Pentecostal pals in the latter group. I’ve also seen wonderful childlike trust and courageous expressions of faith in a God who still heals, delivers, and transforms today.

I know, I know. Oy. I’ve painted both groups with a big ol’ broad brush. Certainly within each “camp” there are lots of theological variations.Both camps can trot out Scriptures to support their respective positions. But I see them as two puzzle pieces that need to fit together in order to tell the whole story. 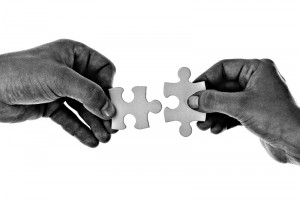 Jesus healed those who were seeking healing. And he healed those who weren’t asking for it. He didn’t heal everyone. And his resurrection was a game changer, vanquishing the curse of sin and death. Holding all these in tension means that neither camp has the whole truth. When Jesus taught us to pray, “Your kingdom come, your will be done”, he was inviting us right into this impossible tension – pressing forward with expectation that we will indeed get to do the things Jesus did (no footnote saying that this is reserved just for Pentecostals and Charismatics only) while surrendering to the kingdom reality that we may not receive the healing for which we seek in this life, and we can expect to suffer for our faith as well.

I haven’t figured out exactly what living in that tension looks like. I wobble to one side, then the other, as if I’m a clumsy toddler. (Spiritually, that’s exactly who I am.)

What about you? Have you seen God supernaturally heal? Have you seen him sustain someone through suffering? Is the tension between the two something you’ve figured out how to navigate? Or do you simply rest in one camp or the other?

March 28, 2016
At The Intersection Of Time & Eternity: Easter Season
Next Post