At The Intersection Of Time & Eternity: Easter Season

It’s the day after Resurrection Sunday. Is it just a day to head to Walgreens and buy some discounted Easter candy? (Jelly beans taste even better when they’re 60% off.)

The Christian calendar proclaims the resurrection in a far different manner. The centerpiece of the message proclaimed by Jesus’ first followers was simple: Jesus had risen from the dead. Temporal time and eternity met in the person of the risen Messiah at the empty tomb.

In the beginning, the followers of Jesus met daily. Organically, these ad hoc gatherings took on a shape of their own as believers gathered on the first day of the week – the day on which the Resurrection occurred – to worship, share communion, learn together, and encourage one another. But the linkage between yearly Passover observance and the events leading to Jesus’ death and resurrection called forth a different kind of remembrance among the majority-Jewish early church. God had linked Passover and Resurrection Day, just as he had Shavuot and Pentecost. The first Christian communities began creating their own yearly ritual around the story of Passover deliverance fulfilled in the finished work of the Messiah.

By the second century, the destruction of the Temple in Jerusalem a few decades earlier, waves of persecution of both Jews and Christians by the Romans, and an increasing number of Gentiles who came into the church carrying no great love for their Jewish siblings in Jesus stirred intense conflict about the date of this yearly observance of the Resurrection. Church leaders eventually settled on a way to unlatch the Church from the Jewish calendar while echoing it in the dating of Pasch (now known as Easter) and Pentecost.

It’s a fascinating and sad story, one I delve into in more detail here. One other echo of the Jewish calendar during this season of the Church calendar is the fifty day period between Easter and Pentecost. Easter isn’t a single day on the Church calendar. While different Christian liturgical traditions take different approaches to this period, worship in congregations following the Church calendar usually focuses on living the reality of the resurrection.

The Jewish festal cycle and the Christian calendar each offer holidays that are meant to serve as an on-ramp into the intersection of time and eternity. These moments and days point us beyond our own everyday agendas and connect us with our place in a bigger, more beautiful story. I’ve been blogging a 5-minute intro to each major holiday and season in both the Hebrew and Christian calendars. Today, I’m offering an overview of the fifty-day season of Easter. 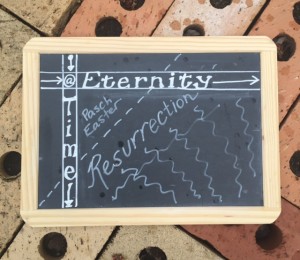 The early church – and many congregations today – baptized new members on Easter morning. It was a way for the entire community to participate in a proclamation of new life. Temporal time itself was split in two by the Resurrection – B.C. and A.D. Even the academic B.C.E. and C.E. designations are divided by a torn curtain and an empty tomb.

One pragmatic way in which the early church resolved this tension was both to disconnect from the Hebrew calendar and try to sync her festal calendar with the holidays and daily rhythms of the culture surrounding them. Roman society (and most pagan cultures before then) had spring solstice fertility festivals. Certainly secular culture today continues the association with pagan fertility symbols including bunnies and eggs.

Easter typically takes place near Passover, as both are dated from the spring equinox. This year, however, the Western Church observed Easter on March 27th, and the first night of Passover doesn’t happen this year until April 22nd. And just to mix it up a bit more, Eastern Orthodox Easter celebrations will take place in many (but not all) congregations on Sunday, May 1.

During the fifty-day Easter season of the Christian year, one important date takes place forty days into the count-up to Pentecost. This date marks the ascension of the risen Messiah to heaven – another example of the significance of forty in the story of God’s people. It also marks a rising expectation for the next movement in the story of Jesus and his community of believers – Pentecost.

Did you know there’s been a push to move Easter away from its lunar calendar dating? Here’s why this is a terrible idea.

We have 2,000 years of familiarity with the notion of living on the other side of the open tomb. We may gather in church services, saying words or singing songs about the resurrection, yet fall prey to the subtle temptation to believe that merely reading, saying or singing these words demonstrates our faith. The resurrection demands a daily, radical re-ordering of our hearts, souls, minds and strength.  This season of the Christian year is meant to yank us into living our inheritance as born-again members of his kingdom: Death is not the end of our “life sentence”. Eternity is.