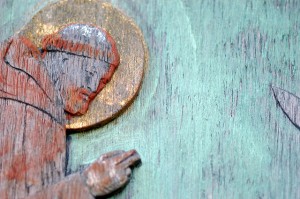 What’s a nice Jewish grandmother like me doing writing about All Saints Day?

Obviously, this day isn’t in my own background, nor is it a day I covered in my book. Ever since I read Jon Sweeney’s excellent The Lure of Saints: A Protestant Experience of Catholic Tradition ten years ago, I’ve had an appreciation for the power of their testimonies in my own life and the awareness that the great cloud of witnesses cheering the Bride onward is made up of people like these; named and nameless, they are clay and courage.

I’ve long been a Halloween-abstainer (though I do like to remember October 31st’s Reformation Day story, too, just to keep my religious traditions fair `n balanced). I can’t embrace the theology of November 2nd’s All Souls Day in which prayers for those in purgatory are offered. But I can join with my Catholic and Orthodox brothers and sisters in giving thanks this day, November 1st, for all of those who’ve died for their faith. Their memory is an incredible blessing to all of us who follow the Lamb who was slain for our sins.

From Father William Saunders at CatholicCulture.org, here’s a bit of history about the origins of All Saints Day:

Both the feast of All Saints and the feast of All Souls evolved in the life of the Church independently of paganism and Halloween. Let us first address the feast of All Saints. The exact origins of this celebration are uncertain, although, after the legalization of Christianity in A.D. 313, a common commemoration of the saints, especially the martyrs, appeared in various areas throughout the Church. For instance in the East, the city of Edessa celebrated this feast on May 13; the Syrians, on the Friday after Easter; and the city of Antioch, on the first Sunday after Pentecost. Both St. Ephrem (d. 373) and St. John Chrysostom (d. 407) attest to this feast day in their preaching. In the West, a commemoration for all the saints also was celebrated on the first Sunday after Pentecost. The primary reason for establishing a common feast day was because of the desire to honor the great number of martyrs, especially during the persecution of Emperor Diocletion (284-305), the worst and most extensive of the persecutions. Quite simply, there were not enough days of the year for a feast day for each martyr and many of them died in groups. A common feast day for all saints, therefore, seemed most appropriate.

In 609, the Emperor Phocas gave the Pantheon in Rome to Pope Boniface IV, who rededicated it on May 13 under the title St. Maria ad Martyres (or St. Mary and All Martyrs). Whether the Holy Father purposefully chose May 13 because of the date of the popular celebration already established in the East or whether this was just a happy coincidence is open to debate.

The Beatitudes are a traditional reading on this day, and this passage from Revelation 7:9-17 is a part of the liturgy in many traditions as well:

After this I looked, and there before me was a great multitude that no one could count, from every nation, tribe, people and language, standing before the throne and before the Lamb. They were wearing white robes and were holding palm branches in their hands. And they cried out in a loud voice:

“Salvation belongs to our God,
who sits on the throne,
and to the Lamb.”

“Amen!
Praise and glory
and wisdom and thanks and honor
and power and strength
be to our God for ever and ever.
Amen!”

Then one of the elders asked me, “These in white robes—who are they, and where did they come from?”

And he said, “These are they who have come out of the great tribulation; they have washed their robes and made them white in the blood of the Lamb. Therefore,

“they are before the throne of God
and serve him day and night in his temple;
and he who sits on the throne
will shelter them with his presence.
‘Never again will they hunger;
never again will they thirst.
The sun will not beat down on them,’
nor any scorching heat.
For the Lamb at the center of the throne
will be their shepherd;
‘he will lead them to springs of living water.’
‘And God will wipe away every tear from their eyes.’

October 24, 2016
Why Does Your Church Worship As It Does?
Next Post

November 7, 2016 Follow The Leader
Recent Comments
0 | Leave a Comment
"The problem of Nepotism within church is really only an issue because we run church ..."
Roland Pope Nepotism And The Local Church: A ..."
"Followed a link from CT. I find this to true. The church I attend doesn’t ..."
Texaninthesnow 40+ And The Church/Pastoring Those In ..."
"This has recently just occurred at my church and my concern has been the children. ..."
RenewingmymindDaily The Collateral Damage From A Youth ..."
"Childishness, Richard. I keep telling you to try grow up."
rose white Old Testament Foundations And Hebrew Roots
Browse Our Archives
Follow Us!