Children of Earth and Moon

A witch is many things, a man, woman, child; a rebel against oppression, a survivor, a worker of magic; called an enemy of society-an enemy of the Church.  We embraced this word to change its meaning and take back its power, not to fit neatly within a society that never wanted us.  We have forgotten the meaning of this word, taking for granted the role we step into when we step into the circle, and all those who have come before us.  As children we took the magic in the world for granted some of us seeing beneath the symbols of fairy tales to deeper meanings hidden within.  We see the injustice that man and his institutions have brought upon this world, and it is through this realization and the resulting oppression that a witch is born.  We are all born children of Mother Earth, those who seek power through exploitation turn their backs on our mother in favor of a capitalistic God who rules over the masses through a “divine aristocracy.”  We are the few out of the masses who stood with the goddess in solidarity while being called heretics condemned to burn.

The Old Ways have survived in the darkness for millennia, forged by the fires of our brothers and sisters and honed by the whetstone of oppression.  We have survived condemnation and risen from the ashes of the past.  It is our resiliency in the face of oppression that has given us the strength to resurrect ourselves.  We are the source of our own Witch Fire; growing in power through adversity. We are reminded of our powerful natures.

We are spirit made physical walking this Earth in bodies made of stars.  We contain the four elements and embody the fifth.  We are the macrocosm and microcosm, self contained universes with unlimited potential.  Seeing this, the fallen ones, descended to teach man the arte of sorcery and cultivating the earth.  Advanced celestial beings from another dimension bringing new technology to ancient civilizations is a common theme in the creation myths of practically all ancient cultures.  This common thread linking the tapestry of Earth’s great history goes back beyond human memory.

The Nameless Arte as it is so aptly called is as infinite and diverse as the spirit world itself.  Called Witchcraft, Black Magic, and Maleficium by those prosecuting its practice.  Sorcerous practices reach across cultural divides and language barriers.  The craft manifests differently based on the cultural context and available symbols.  As a society develops in complexity, new cultural symbols emerge creating new connections of power.  Witchcraft has layer after layer of cultural symbolism and folklore based on the respective region within which it is practiced.  The area of classical witchcraft practices, known as traditional witchcraft is based on the medieval period specifically Central and Western Europe, which contributed heavily to out stereotypical image of the witch.  Classical witchcraft is influenced by the revival of Greco-Roman culture popular during the later middle ages, indigenous Pagan practices left behind by Celtic and Germanic tribes as well as the occult knowledge preserved in grimoires from Arabian alchemists and Jewish mystics during Europe’s Dark Ages.

Finding your way through the mire of history

It is also important to remember the role played by Christian magicians oftentimes members of the clergy, who during the grimoire period contributed to the preservation of a large body of occult lore.  Magical practice isn’t what it was two thousand years ago, and we must recognize the centuries since the beginning of the Abrahamic religions as part of our collective history.  Christianity had ruled the west since the fall of Rome.  Our modern society is built on the bedrock of Christendom; every ruler and monarch since then operating under the auspices of the Church.  Providing a mutually beneficial relationship for those in power.

Ideas such as religion, paganism, and spiritual intermediaries are Western concepts conceived by a Christian society.  The concept of religion gave people a feeling of inclusivity-being able to define “us” and “them.”  Paganism, was a relatively new term to designate those spiritual practices outside of Christianity, Judaism and Islam.  All three Abrahamic faiths utilize spiritual intermediaries of clergy members to facilitate salvation for the lay person.  These and other concepts are ingrained into our Western worldview and influence how we think about spirituality.  It can be difficult breaking free of a monotheistic way of thinking, its reigning duality and all-or-nothing attitude.  The first step is beginning to understand the diverse and infinite nature of the Universe, which has potential for endless possibilities.  The idea of a religion is a human construct.  Spirit is what we are and how that manifests is our spirituality.  We need no intermediary to connect us to what we are already a part of.

Upon first coming into the Craft our sense of guilt and sinfulness is still fresh; pushing on but questioning every step of the way.  We are assured that, “there is no Devil in the Craft,” and that black magic is a misnomer just like white magic.  Many of our doubts are eased by well-meaning authors or leaders introducing us to the path.  However after further investigation into greater depths that images of Dark Goddess and Horned God emerge to show us that where there is light there must be darkness, to deny one or the other is to undermine the nature of our Crooked Way.

Witchcraft was born in the shadows, the illuminating fire of the Witch Father lighting the way for the first of us who called upon the Elder Gods.  Our horned gods danced around sabbat fires before there was a Hell for the Devil to rule.  Centuries of myth and false history have shaped the world we see on the surface; hiding the truth beneath layers of symbol and metaphor.  We are children of the Earth and Moon, taught by fallen angels to be like gods.  Through the oppression of the Church we have honed our skills in darkness discovering the hidden secrets of our world.  There are many diverse powers between heaven and earth at our disposal and a multitude of elder spirits beyond the God of Abraham and his Devil. 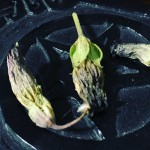 June 29, 2017
Individual Components of a Witch's Practice
Next Post 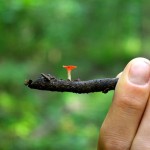 You Cannot Be Taught To Be...
For Puck’s Sake
Related posts from Poisoner's Apothecary