For years I considered Imbolc, just another extra holy day to be observed.  It didn’t hold a lot of personal resonance with me, and this can feel true for many individuals when it comes to  the pagan holy days or witches’ Sabbats.  Simply reading about the day’s history and traditional observances, learning the myth of an associated deity; or making Brigid’s cross every year because that’s just what you do, leaves some wanting for relevance and deeper meaning.   Celebrations like Samhain and Beltane are outwardly witchy and their symbolic associations are self-evident.   While everyday can’t be Samhain, (unfortunately!) additional occult understanding of the Sabbats can be discerned by looking at them holistically.  By looking not just at one Sabbat, but three; the Sabbat in question, its predecessor and the one following, we can gain additional insight into the story being played out by the stars.  Think of it as an ongoing story that plays out over and over again in the Heavens, not just an autonomous observation.

Framing this bigger picture are the four cardinal signs of the zodiac, acting as signposts.  Personally, I have found that a combination of astrological, mythological and historical associations provide the best and most comprehensive sense of the “flavor” of the season in question.  We can look at the cardinal zodiac signs, those that begin the seasons to start seeing the interaction within the Wheel of the Year as a whole.  For example; Aries is the sign that begins Spring, Cancer the Summer, Libra the Autumn, and Capricorn the Winter.  The Sun moving into each of these signs is what marks the astrological change from one season to another.  However, due to astronomical precession the Sun is now in its previous sign during these occurrences.   The classical model can still be used, and gives the best understanding because it was the stars that first wrote human cosmology.  In addition to the Sun sign; we can look to the Moon and the sign it occupies as well.

The Sun sign will tell us more about the overall energy of the Sabbat, and what this means for the wider community.  It tell us what energies we can best send out into the world at this time.  By looking at the Moon sign we find insight to how we can personally integrate these energies on a personal level and how that applies to our own lives.  While the ruling Sun sign will stay the same, the Moon sign will change the season’s flavor from year-to-year.

Imbolc is a cross-quarter holy day, sitting at the mid-point between the cardinal signs of the zodiac.  These cross quarter days are at the mid-point of each season, and are fixed signs.  They are the linchpin holding it all-together.  These are the gatekeepers of the cosmos, containing both light and darkness, allowing the ebb an flow between these two polarity to continue their eternal dance.  Imbolc falls under the sign of Aquarius.  It is preceded by the Winter Solstice and followed by the Vernal Equinox.  Within Imbolc we see this paradox of greatest darkness and new light.  As a fire festival, light is of central importance to Imbolc.  However, in the Northern Hemisphere, at this time of year; Imbolc is often the one fire festival held indoors.  I find this appropriate for the mysteries of Imbolc.  An image of a single flame, burning defiantly in the face of a dark winter’s night comes to mind.  A light of hope and warmth shining through the lonely windows of a house on a snow covered hill blanketed in darkness-this is where we cultivate our inner flame.  It is through this realization that the fires we cultivate within ourselves are initially ignited and tended in darkness.

The overall feeling I get from Imbolc is very “Light betwixt the horns.”  Although the darkest day has passed, we are now in the dead of winter.  Images of solitary flames illuminating the making of a Witch’s Pact and work with familiar spirits come to mind.  Since the winter solstice, the Sun has been blackened we have burned away what wasn’t serving us this past year, and we have cultivated a fertile field to plant our new seeds.  Now is the time to invite the light back in, to call upon that inner fire, the black flame within ourselves.  These are like the first stirring fires within the earth that awaken the life sleeping in darkness.  Interestingly, the illumination of Imbolc is anchored between the horns of Capricorn from the winter solstice and the Horns of Aries at the vernal equinox.  Themes of illumination and bringers of light make multiple appearances in the practices surrounding Imbolc.

Like the other cross-quarter days, Imbolc, is a catalyst of energetic exchange.  A liminal time which initially seems paradoxical, but on further inspection reveals deeper points of connection.  Forces of individuation and inspiration are powerful at this time.  It is now that we can seize the momentum for the early growth of that which was interred during the dark half of the year.  Imbolc falls under the rulership of Aquarius, the water bearer.  Aquarius, an air sign rules over the mental realms and can be seen as a “light-bringer” or “bearer of inspiration,” which he pours from his vessel.  The influence of Aquarius activates our mental abilities, our ability to communicate and to relate with others.  Aquarius is all about individuality, invention, and mental depth.  They can also be unpredictable, as well as daring, passionate and courageous; which they share in common with their opposition, Leo.

Each Sabbat also holds the seed of its opposing holy day, in this case Lughnasadh (Leo) and Imbolc (Aquarius).  Here we have two fire festivals, linked by their opposing positions on the Wheel of the Year.  Both festivals are constructed around the creative energy of fire/light.  This theme of light and light bearers is recurring in both Lughnasadh and Imbolc.  They are also under the influence of two of the most individualistic signs, Leo and Aquarius.  From this side of the wheel we receive influence from Leo’s creative force.  Driven by passion this creative energy differs from Aquarius in that it is not mental creativity.  It is a deeper, more generative force of creation which creates simply for the sake of creating.  At Imbolc we are drawing that illuminating fire up and into ourselves.  By Lughnasadh the solitary flame we have stoked since February is released out into the world in a creative fury.

Be inspired! Stoke your fire and be illuminated! 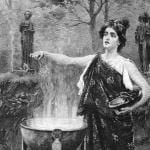