Lethargic, uninspired, consumed by ones own thoughts; the melancholic mind is a labyrinth.  Its winding passageways conceal deeper and darker holes to fall into.  That jaded depressiveness characteristic of poets and artists who have deemed the priorities of the material world to be transparent, two dimensional and unimportant; what seems like a negative character flaw is actually the potential for greatness.  The ecstasy of madness, the fire of inspiration, the frenzy of enthousiasmos when contained within the brazier of Saturnian melancholia becomes a powerful tool.  The unbridled fire that would quickly consume itself becomes the gods’ gift to humanity and can now be directed with purpose.

“Aristotle says in Problemata physica, that through melancholy some men have become divine beings, foretelling the future like Sybils…while others have become poets…and he says further that all men who have been distinguished in any branch of knowledge have generally been melancholics.”  -Henry Cornelius Agrippa, De occulta philosophia

What is it about this quality that drives one to great things, but also drags a person down into the darkness?  Perhaps it is through confronting one’s own shadow and spending so much time in the dark one sees more deeply into themselves and is able to reflect that depth back into the world.  I have learned that it is during the darkest times when everything seems static and unchanging that we unlock our greatest potential.

I am polarized between these two extremes, one being very pensive, introverted and oftentimes unmotivated.  The other extreme manifests as a manic energy or drive to accomplish as many things as quickly as possible.  Over the years I have learned to ride these waves and not to fret the changing tide.  One makes up for and balances the other.  Constantly creating and pouring your energy into things isn’t sustainable indefinitely.  Its those quiet, leisurely contemplative times that allow the mind to forge new connections and allow new ideas to rise to the surface.   I often find myself in the pose of Albrecht Dürer’s Melancholia I, with chin firmly planted in hand and a glazed look in my eyes.

Sometimes we do not have the luxury of waiting for our inner tides to shift; when we need rest but there is work to be done or when we need to motivate ourselves but just can’t.  When our inspiration needs jump started, all it takes is that little spark to get the fire going again.  Sometimes we need to push through, and work without the motivation to do so.  I generally find that when this is the case when the inspiration just isn’t there going through the motions gets things moving.

All of this is easier said and done when your in that place and just can’t seem to get out.  When all else fails I turn to the promethean spirits of divine inspiration and illumination, those who put the fire in our heads.  These are the lightbringers, the teachers of mankind, responsible for all the arts and sciences.

There are also daemonic spirits  that can help inspire us, lead us to the discovery of knowledge and even teach us topics of interest such as herbology or astrology.  These spirits have been sought by magical practitioners throughout history to aid them in their endeavors.

Plant spirits can be utilized as well.  Many of us use caffeine every day to stimulate ourselves to accomplish our tasks.  Herbs that aid memory and bring clarity to the mind, like rosemary and scullcap are beneficial for long periods of study.  Then there are the intoxicating plant spirits that send us into a druken frenzy; powerful plant spirits that open us to new sources of inspiration.

When we are in that place of creative frenzy we are unstoppable.  Ride the wave of inspiration, but remember that it is during those times of stagnancy that will build our reserves for another creative burst. 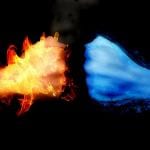 March 30, 2020 Saturn, Pluto and the Plague Times
Recent Comments
0 | Leave a Comment
Browse Our Archives
get the latest updates from
Poisoner's Apothecary
and the Patheos
Pagan
Channel
POPULAR AT PATHEOS Pagan
1