And the things of earth will grow strangely clear

And the things of earth will grow strangely clear September 15, 2014 Jonathan Aigner 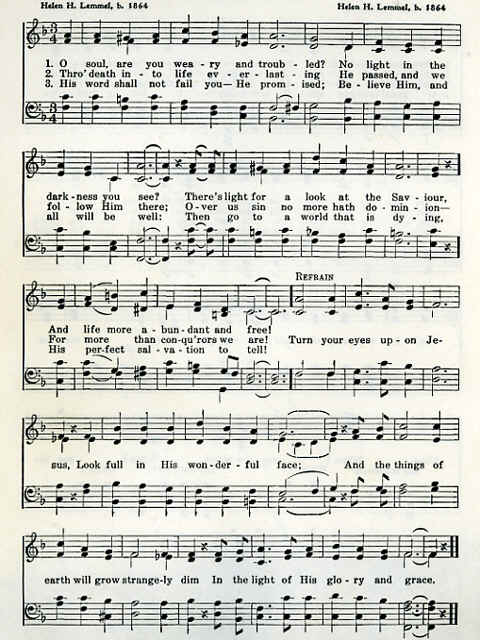 Turn your eyes upon Jesus,

Look full in His wonderful face,

And the things of earth will grow strangely dim,

In the light of His glory and grace.

When I was growing up in what amounted to an early megachurch complete with contemporary music, I used to look forward to the end of the sermon. Partially because the pastor was about as boring as the Weather Channel and about as theological, but even more because afterwards, we actually sang a hymn instead of a mid-90s contemporary song. This was one of the ones we sang regularly. And it sounds really good, doesn’t it? Like we’re all just about to cuddle up with Jesus and watch all our cares go away. Maybe that’s why the folks over at Hillsong have even used it. And, of course, repeated it ad nauseam.

In related news, I think Helen H. Lemmel may have been a Gnostic.

When Our Favorite Words Are Wrong

Okay, so she probably wasn’t a Gnostic, although I think her little ditty creeps dangerously close to it. That’s the thing about heresy. It’s usually an accident. Like this one time I wrote a paper for a historical theology class in which I somehow ended up denying the Trinity. I didn’t do it on purpose, but it was a gruesome scene, nonetheless.

Anyway, this meager chorus made the United Methodist Hymnal

, but it wasn’t all good ol’ Helen wrote. Her original poem, which she apparently titled “The Heavenly Vision,” looked like this.

O soul, are you weary and troubled?

No light in the darkness you see?

There’s a light for a look at the Savior,

And life more abundant and free!

Turn your eyes upon Jesus,

Look full in His wonderful face,

And the things of earth will grow strangely dim,

In the light of His glory and grace.

Through death into life everlasting

Over us sin no more hath dominion—

For more than conquerors we are!

His Word shall not fail you—He promised;

Believe Him, and all will be well:

Then go to a world that is dying,

His perfect salvation to tell!

News flash to everyone who gets goosebumps when they sing it: this song is not about cuddling up with Jesus. It’s about spiritual warfare. It’s about the classic evangelical understanding of Christian responsibility. It’s also rife with poor escapist theology (You know, the whole “this world is not my home” perspective ). And then there’s this bit about the things of earth growing strangely dim. This represents a very negative view of the world around us, almost as if it’s nothing more than a fireball of garbage moving toward complete destruction. I heard this a lot growing up. But that’s just not the case. The truth is, this is a good world designed by a great Creator, and even though it and its inhabitants bear the awful weight of the curse, that’s not always going to be so.

Don’t believe what Kirk Cameron tells you, this world is our home, at least it will be in the day of resurrection when heaven comes down and the cosmos is restored as far as the curse is found.

The truth is, turning our eyes upon Jesus doesn’t make the world grow dim. It’s dim enough without Christ. With Christ, it grows brighter, clearer. The things of earth are strangely, curiously brought into sharper focus. The world might be dying, but God is in the process of bringing it back to life.

All this is not to say that sin isn’t still all around us, but it’s not the truest part of creation, and there’s coming a time that all will be well in this currently chaotic world. And in that day, the wolf will lie with the lamb, and this world will be brighter than ever before.As so many from my background are, I was born and bred to be the morality police. Seriously. The message I got was, “Who gives a dang about anything goes on in the world, as long as nobody’s drinking, gay, or having lots of sex and abortions.” They wanted to turn their eyes in Jesus’ general direction to dissociate from all the things that offended their fundamentalist sensibilities.

But the clarity that comes from actually looking at him calls us to be more compassionate, to be less judgmental, to be okay with gray areas, to be completely not okay with injustice, and to engage with the world around us with hope and purpose.

N.T. Wright says it this way:

There’s an old chorus which begins, ‘Turn your eyes upon Jesus; look full in his wonderful face’. That’s a great invitation, but sadly it goes on ‘and the things of earth will grow strangely dim in the light of his glory and grace.’ There is a truth in that, but actually in today’s gospel a very different note is sounded: when we look fully at Jesus, risen, ascended and glorified, and when Jesus sends his Spirit on his people, then the things of earth will be seen in a new, sharp and properly disturbing light. And instead of escaping from the world, retreating like an embarrassed chameleon to one colour-field only, we are sent into the world, not to take on its colour but to reveal the new combined reality of heaven and earth, to live in that reality – which we do in sacrament here, and in service outside – and to declare to the awkward and unready world that Jesus is Lord. Pentecost is the end of the great cycle of events that began with Advent; but it is of course the beginning of the new world, the world of God’s kingdom, of his combined heaven-and-earth reality, the world in which, by praise and prayer and prophecy, we are now called to live without embarrassment and to love without measure.

And with all due respect to Ms. Lemmel, maybe we shouldn’t sing this one anymore.

N.T. Wright, Surprised By Hope: Rethinking Heaven, the Resurrection, and the Mission of the Church, (New York: Harper), 2008.

If you like what’s going on here, please share by clicking your choice of the buttons below. Thanks.

September 23, 2014 9 Reasons to Keep the Church Choir Alive
Recent Comments
4 Comments | Leave a Comment
Browse Our Archives
get the latest from
Ponder Anew
Sign up for our newsletter
POPULAR AT PATHEOS Evangelical
1 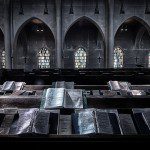 Evangelical
A few more reasons why we should use...
Ponder Anew

Evangelical
15 Reasons We Should Still Be Using Hymnals
Ponder Anew