I’m always a bit frustrated when I see articles like this one from Cathy Lynn Grossman on the Religion News Service, entitled “Many church choirs are dying. Here’s why.” They never tell the whole story. It’s accurate that many churches have traded the traditional choir for a more contemporary ensemble in their services. I don’t think we can argue with that. But what the article doesn’t say is that there are many churches in which the choral art still grows and flourishes. Beyond that, there is no real discussion of what is being forfeited in this installment of Christian culture’s relentless pursuit of what is trendy.

There is much in the article that could be addressed, but instead of offering a blow-by-blow rebuttal, I’d rather take a minute to discuss the unique presence good choral music brings into corporate worship.

1. Choirs support good congregational singing. A solo leader singing into a microphone sends a message to the congregation that its role is similar to that of an audience at a rock concert: “Sing along if you please, as obnoxiously as you please, as sloppily as you please.” If you’ve been to church recently, especially in churches that use only commercial Christian music, you may have noticed that most often, congregants choose not to sing at all. The amplification puts up a barrier to singing, rather than establishing a musical current to help the congregation. On the other hand, a choir demonstrates that the voice of the congregation is primary, not secondary. It encourages them to join in by lifting their voices, without overpowering them with a wall of amplification.

2. Their visual presence is an encouragement to the congregation.  I can’t tell you how many times I’ve heard a worship leader admonish congregants “to get alone with God,” and pretend that there is no one else around. There is a time and place for that, but worship gatherings are neither the time nor the place. We are there to be together, to worship God with each other, to be community. When there are only a few leading, it’s easy to forget this, to feel alone. But when we look up and see a mini-congregation of faces looking back at us, we’re reminded that we’re not alone, that we’re there to be part of a very special communion. And, of course, it’s all in practice for when we join that great heavenly chorus around the very throne of our Creator/Redeemer God, the Object of our worship. 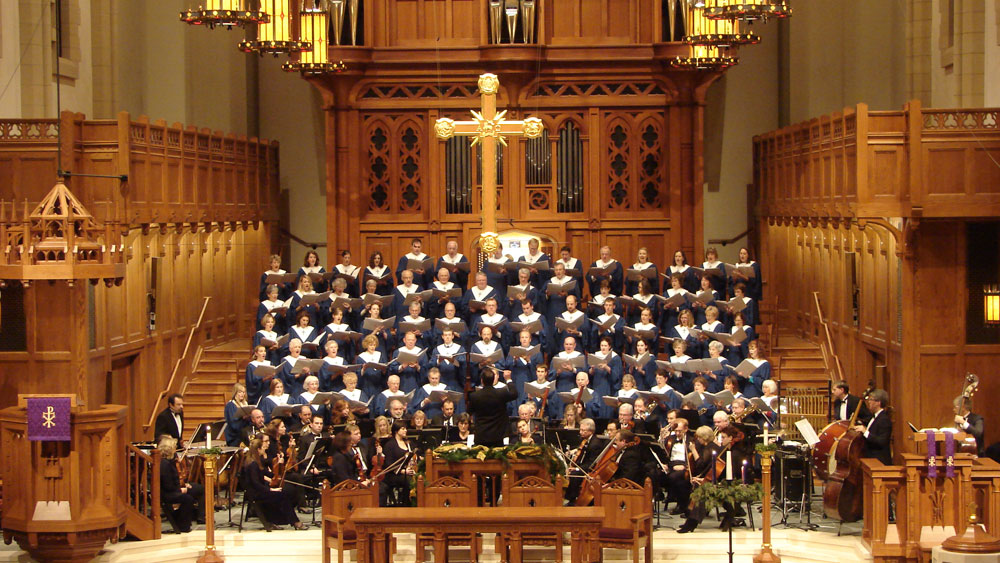 3. Choirs make a broader repertoire available for a worship service. With a good arrangement, choirs can sing selections from practically any genre, from classical, to folk, to world music, to contemporary/popular music, something that just isn’t possible for a “worship leader” and a praise band.

4. They can offer more difficult and complex music than is possible for the greater congregation. Besides leading in times of corporate singing, since choirs have the benefit of outside rehearsal time, they can offer up musical praises on behalf of the congregation that would otherwise not be possible. In this sense, a choir can be a preaching and praying group, proclaiming God’s self-revelation, to which the congregation can listen, meditate, and respond worshipfully in their hearts.

5. Choirs help singers develop and improve their musical gifts. Christians are a singing people. This is not only biblical, but is a tradition older than the faith itself. Church choirs provide a free musical education, and help to refine the abilities of amateur musicians who might not otherwise have the opportunity. And while in the Grossman article, Pastor Merritt claims that “the younger generation doesn’t gravitate toward choirs,” that perspective is short-sighted. Much of the general population has had experience singing in choir at some point in their formal education, while many others have had other exposure to applied musical arts through band or orchestra. This is a huge population that is ready to either sing in a choir, or to appreciate and be encouraged by well-crafted and executed choral music. Giving children opportunities for choral education in the local church setting further primes congregations to be accepting and supportive of choral music.

6. Participation in choir ministry can be an avenue for introducing outsiders to the church and the Christian faith. I’ve known many, many people who have come into a church by way of a choral ensemble, have heard the gospel, and have responded with committing their life to Christ. Or, as was the case in my life, choirs can help keep people connected to the faith. I was all but ready to leave the organized church as a teenager, but a move to a new congregation and finding love and acceptance in the choir loft kept me engaged, and ultimately set the stage for me to recognize my calling into vocational church work.

7. The choral process reflects the mission of the universal church. Participating in a church choir teaches Christians how to work together sacrificially for the common good of the group, just as the church is to follow the model of our Servant-Savior and give sacrificially for the good of Christ’s kingdom.

8. A church choir is an open, welcoming, and diverse group. Allow me to introduce you to my favorite YouTube performer, Mr. John Daker.

There’s no way John would make it onto any praise team anywhere. He’s not cool enough, young enough, or stylish enough, and his tendency toward performance anxiety doesn’t help, either. But, you know what? John obviously loves to sing, and I’m guessing his service in the Chancel Choir at First United Methodist Church is diligent and earnest. We already know he can match pitch (and sing in diverse styles), and having sought out the services of Mrs. Reva Cooper Unsicker, he must be quite teachable. For those qualities, he would be more than welcome in most church choirs. He could sing in my choir any day, although I probably wouldn’t let him do “Amora” too, okay?

Seriously, there seems to be a trend in contemporary worship culture that says unless you look a certain way, dress a certain way, have the right personality, fit into the targeted age bracket, or meet some other predetermined “coolness” factor, you cannot lead in corporate worship. This is wrong. Worship leadership should resemble the radical diversity of Christ’s Kingdom, and a choir facilitates this quite well.

9. They add creative artistry and beauty to a worship service. The profound poverty of artistry and imagination found in our culture’s popular musical output is staggering, as is our willingness to fill our worship gatherings with christianized versions of this stuff.

Michael Raiter refers to this phenomenon as the “Hillsongization” of Christian gathered worship, where everywhere “the singing in the church – both the songs that are sung and the style of music is just the same. Oh, the words of the songs might differ, but it’s the same music team singing the same way. There’s the obligatory leader with the obligatory two or three singers accompanying her, the obligatory drummer, the obligatory keyboard player and the obligatory two guitarists. You’re allowed some freedom in your choice of a sax or flute, depending on the resources available, but it’s all exactly the same for every song in ever place.” It’s as if every church has its own cover band, and the quality of the worship (or, rather, “music”) is determined chiefly by whose cover band is the best.

As our fragile and fleeting human ability to create beautiful artistic expression is such a striking example of our divine Creator’s image in us, I don’t think the church can denounce this trend strongly enough. Oh, to be sure, having a choir doesn’t automatically mean your church’s music won’t become “Hillsongized,” but it gives you a greater organic palate for exploring the full capability of the human voice. 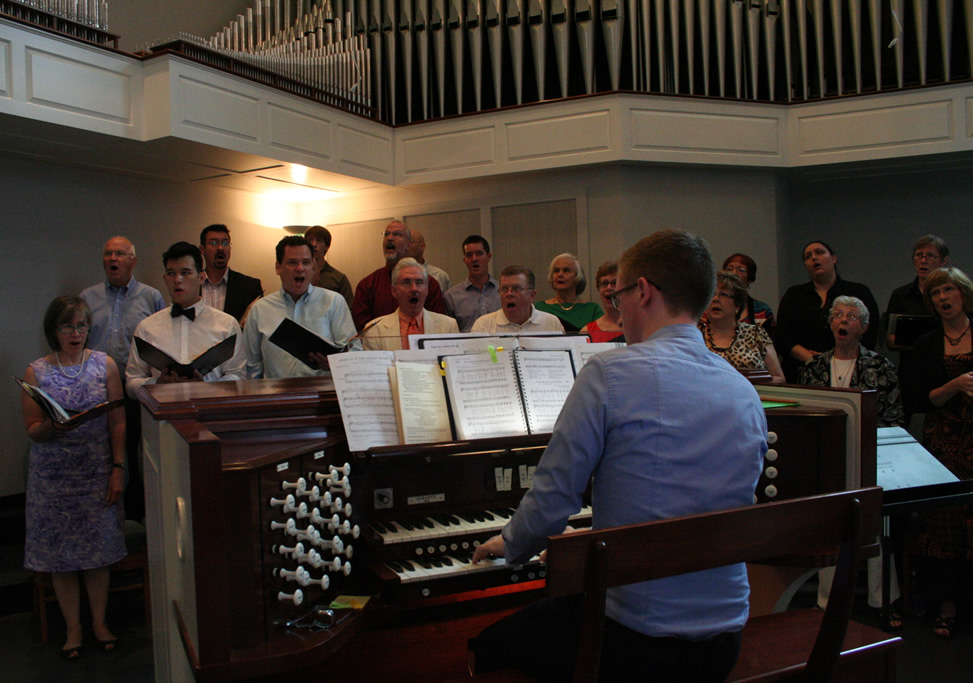 In closing, we need to stop and think about all we are giving up when we lose a choral presence in corporate worship. I think decreased emphasis on choral music in church is costing us dearly in our ability to follow the New Testament admonishment to sing and make melody in our hearts to the Lord.

Comments? Concerns? Anything I left out?

If you like what’s going on here, please share by clicking your choice of the buttons below. Thanks.

September 15, 2014
And the things of earth will grow strangely clear
Next Post

September 30, 2014 Does it matter if we're singing to God or about God?
Recent Comments
123 Comments | Leave a Comment
Browse Our Archives
Related posts from Ponder Anew 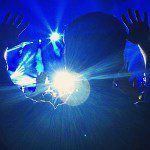 Evangelical
What did Chris Tomlin ever do to you?...
Ponder Anew 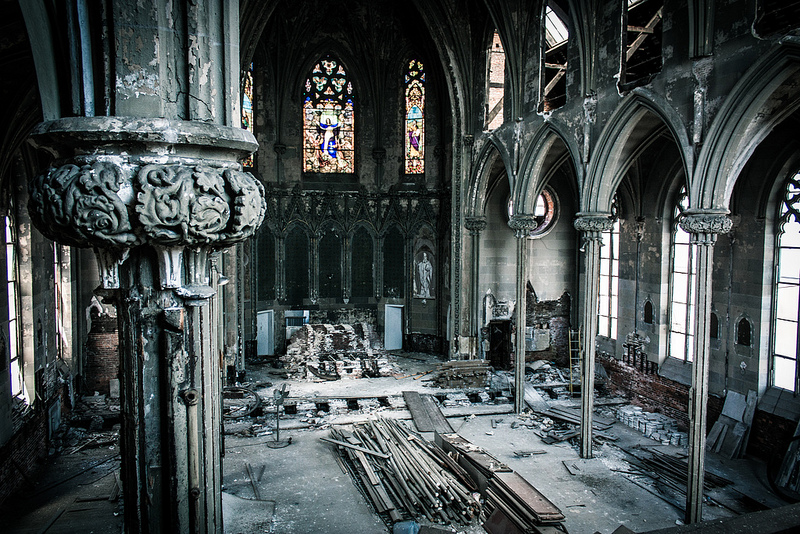 Evangelical
Why You Should Stop Leading the Worship Music...
Ponder Anew 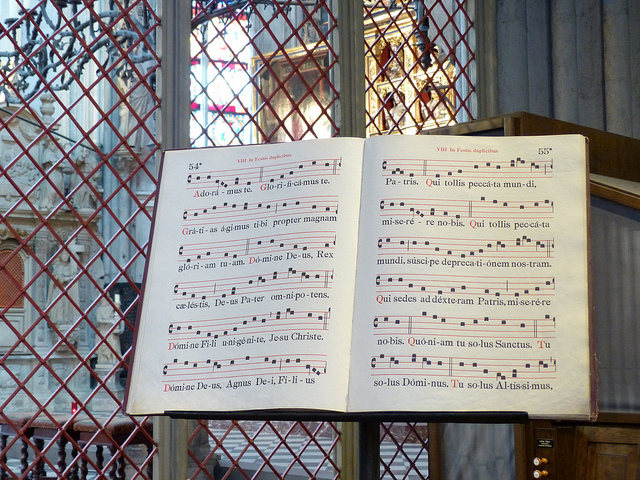