I’m admittedly not the biggest proponent of Vacation Bible School as a ministry strategy. In fact, I think VBS as it’s currently packaged by the likes of DeathWay, Orange Church, and other publishers and peddlers of jesusy crap is just another one of the marketing techniques that has so alienated the millennial generation from the American church. Even with the best of intentions, it’s hard to package Jesus up into a product that can be sold to small children within the span of a week. Doing so while making Jesus culturally appealing is next to impossible unless you reduce the Christian faith into a formula.

But then again, the idea of NOT doing VBS just isn’t going to fly with most evangelicals. I mean, come on, think of the children! And the free childcare!

The recent Babylon Bee article on the “Sinners in the Hands of an Angry God” VBS got me thinking. If we have to do VBS, let’s start getting a little more creative, and maybe have a little more fun. So I sat down and put together a few ideas for future VBS years that are sure to make Jesus great again for contemporary Christian culture.

While DeathWay and Orange Church have angrily rejected all of my ideas, I still have high hopes for Cokesbury.

Pants on Fire: The Ananias and Sapphira Story

Capture a glimpse of God’s sovereign power while warning young children what could happen next time they lie about brushing their teeth.

Jabez: The Real Savior of the Bible

Bruce Wilkinson is the smartest man in the history of the world. God gave us 66 books to help us understand the Gospel, but the real key to happiness and success is tucked away in an obscure prayer in prayed by an inconsequential dude in the Old Testament. Monday through Wednesday will be spent on teaching the kids how to actually find 1 Chronicles in their Bibles.

Not One That Pisseth Against the Wall

There’s a reason the King James Version is called the Authorized Version. It’s because it was “authorized” by God, dummy. Don’t be deceived, kids. Just because some “scholars” have done more “studying” of better “manuscripts” doesn’t mean we need to use other versions. I mean, nobody even got saved before 1611, right?

This oceanic theme VBS is a wonderful way to indoctrinate all children into Hillsong Church’s master plan: to get rich and take over the entire universe.

It Was All Her Fault: How Bathsheba Trapped David

In this culture of gender justice and #MeToo, now is the time for us to teach our young people how to take a stand and hold onto what is eternal. Like patriarchy, male privilege, and rape culture. We all know that David just couldn’t help himself, and if Bathsheba had just bathed in private like any modest woman, David wouldn’t have given in to a temptation worse than murder. And also murder, too. Hadn’t she ever read Romans 14:21? Of course not! The little hussy probably wore yoga pants, too.

Don’t be such a smug little jerk to your brothers and sisters, boys and girls, or you might find yourself with a change of scenery.

How Great Is Our Chris (My Chains Are Gone)

This one seems to be really, really good, until we realize the “god” we’re introducing to our children is none other than jesusy superstar, Chris Tomlin. Might as well strip away all that stuff about God, Jesus, and the Bible and save everyone’s time.

Don’t Be a Heretic

This life-changing week will be spent warning children to avoid the ancient Christological heresies. Game ideas include “Lop the Head of the Heretic” and, for older children, “Filioque,” in which nobody eats, drinks, pees, or goes home until they agree on a new creed. Each day culminates in burning another false teacher at the stake.

What other great ideas for VBS can you think of? 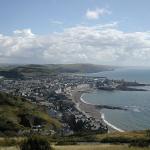 July 11, 2018
Apologies to ABERYSTWYTH and People Who Love It
Next Post

August 1, 2018 How Breastfeeding Is Like Liturgy: A Dad's Perspective
Recent Comments
0 | Leave a Comment
Browse Our Archives
get the latest updates from
Ponder Anew
and the Patheos
Evangelical
Channel
POPULAR AT PATHEOS Evangelical
1