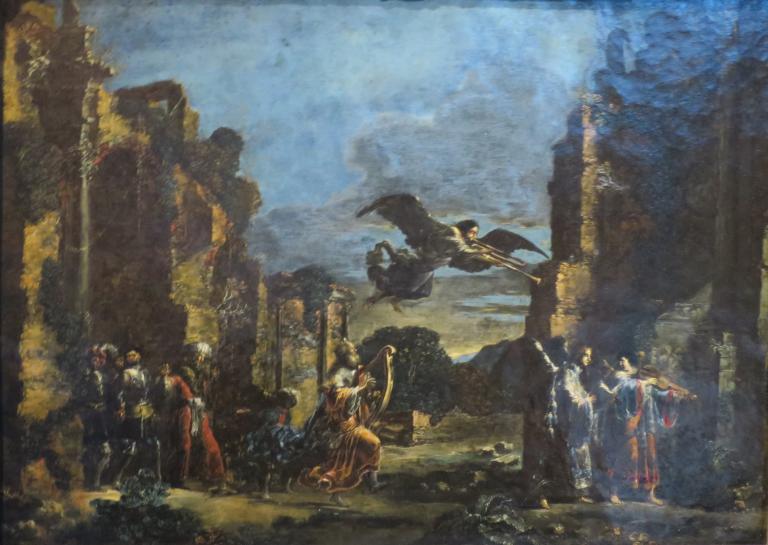 I have been participating Jonathan’s blog for a couple of years now. I have even written a few guest posts for Jonathan.  Over the years, I have seen Contemporary Worship advocates consistently point to purportedly biblical arguments and say, “See, this proves it; Contemporary Worship is biblical.” Unfortunately, the Evangelical church in general, and the Contemporary Worship Movement in particular, seems to be theologically malnourished when it comes to worship. Every excuse for flagrant sensuality, every verse that seems, even in passing, to talk about music, and every appeal to raw emotion is enough to justify the idea that somehow, music equals worship.

Three bits of Sacred Scripture have been abused in this manner, as if they were screaming out to the Modern Worship anti-theologian, “Use me! Pick me! Send me in, Coach; I’m ready to play!” Those three blurbs from scripture describe David’s dancing at the return of the Ark of the Covenant (2 Samuel 6), the rededication of the Temple by Hezekiah (2 Chronicles 29), and Jesus’ statement about worshiping “in spirit and in truth” (John 4). It is my hope that we may, finally and forever, world without end, put an end to the hyperbole and just plain bad exegesis that surrounds these passages.

For this article, I want to focus on David’s dance as described in 2 Samuel 6, but before we jump into the passages in detail, we should talk about exegesis and how I view biblical interpretation; it’s a sticky conversation. Some people love commentaries while others view them as a human-centered attempt to impose a particular reading or viewpoint on Sacred Scripture. I view them as a voyager would view set of maps and charts. Some maps will help get you safely to your destination. Some will get you there, but do so through circuitous routes that may take the traveler on some strange voyages. Others are unreliable and best avoided if the traveler wants to arrive at all. The conversation is complicated by the voyager’s choice of ship. There are those who embark on the good ship Calvin, others on the Wesley, some on the Luther and others on the three-masted schooner called Catholicism. There is, for better or worse, a ship for every traveler.

So, to avoid any wrangling about which ship is best, let me tell you all that I am a lifelong Wesleyan which means I begin from a perspective that stresses God’s love as His primary attribute, but does not diminish his other attributes such as His mercy and Justice. That’s infused with a healthy shot of Sacramental theology. I gravitate towards known, trusted sources that reinforce my Wesleyan bent such as H. Orton Wiley and Kenneth Grider along with commentaries from conservative sources both Protestant and Catholic. I appreciate the work of new theologians, but tend to be cautious about accepting their views and ideas in toto.  It’s okay to disagree with my theology. It’s not okay to offer isolated passages of scripture willy-nilly, or to use the shotgun approach to exegesis or to berate a brother or sister in Christ simply because they espouse a different theology.

Okay, we got that out of the way!

Abba Should Have Called it “Dancing King”

Let’s examine the claims made by the Contemporary Worship Movement in some detail. The most common argument used by proponents of Contemporary Worship is David’s dance as the Ark of the Covenant is returned to Jerusalem 2 Samuel chapter 6. The argument claims that David’s dance is a wildly physical expression of worship. Therefore, the argument says, no one should complain that contemporary worship  overly emotional. Instead, David’s exuberance and lack of inhibition should be taken as models for our own uninhibited exuberance in worship. Two aspects of the story stand out as evidence for using David as a model of uninhibited exuberance. One is his lack of concern for his own dignity as he worshipped God as exhibited by his exuberance and unseemly dress. The other is Michal’s scorn for David’s unabashed joy at the return of the Ark.  We’ll address these two specifics before talking about the larger context of the event.

2 Samuel 6:14 says “Now David, wearing a linen ephod, was dancing with all his strength before the Lord.”

See, David was dancing in a linen ephod— his BVD’s, his skivvies, his whitie-tighties.  What’s more, neither he nor God objected to his shamelessness.  Michal’s reaction to David further clarifies David’s condition when, a few verses, she says “How the king of Israel has distinguished himself this day! He has exposed himself today before his servants’ slave girls the way a vulgar fool might do!”

First, was David really dancing in his undies? Hardly. An ephod is a priestly garment. For the lower-level priests, the garment was a simple linen, cape-length shoulder garment. The high priest’s ephod was a more elaborate affair and bedecked with jewels and precious stones. It would seem then that David saw himself in a priestly capacity as he led the procession that bore the Ark back to Jerusalem. This is further borne out in the next few verses that describe David as giving burnt offerings, peace sacrifices and distributing bread and cakes to the people; tasks and foods typically associated with the Tabernacle sacrifices.

The response from Michal, David’s wife, indicates that she was distressed at David’s “exposing” himself to the slave girls. The Hebrew word that we translate as “exposing” has a number of meanings ranging from having the character or nature of someone revealed to exposing someone’s nakedness. So what was being exposed here? David’s nakedness? That’s doubtful, given the number of warnings in the Old Testament about exposing nakedness and the nature of an Ephod as a priestly garment.

Michal’s real and very cynical concern, that “…the King of Israel has distinguished himself this day!” finds its reply in David’s words;  ”It was before the Lord, who chose me above your father and above all his house, to appoint me as prince over Israel, the people of the Lord—and I will celebrate before the Lord. I will make myself yet more contemptible than this, and I will be abased in your eyes.” Michal’s concern, it would seem, was not that David exposed his nakedness – he didn’t— but that by assuming a priestly role in the procession, he denigrated his kingly office. After all, her father, King Saul. stood “head and shoulders” above all, epitomized the image of a king. He was strong, urbane, and lordly of bearing. He was also disobedient to God and was replaced, at God’s command, by David. Michal’s scorn was not about David’s dancing, or exuberance, but his willingness to diminish his own royalty to a royalty that infinitely surpassed his own—the royalty of God, Ruler of Heaven and Earth and King of Kings.

Finally, it is important to address the context of David’s dance. Proponents of Contemporary Worship fail to acknowledge that David’s dance was a solitary and personal expression of joy and thanksgiving. Hebrew worship was conducted in the Tabernacle and, later, in the Temple and consisted of the ritual sacrifices prescribed by Moses in Leviticus. Levitical worship was corporate, formal and liturgical. It brought about repentance and the love of Yahweh and the desire to live within the liberating constraints of God’s law. Most notably, Levitical worship was a shadow and forerunner of the worship that Jesus and the Apostles gave to the early church, a worship that is meant to transform us, personally and corporately, into the likeness of Christ through the ministries of Word and Table

So what gives? Why are the supporters of the Contemporary Worship movement so eager to grasp at such thin arguments to support their claims? The idea that David’s uninhibited enthusiasm supports an entire regimen, a world-wide movement of dubious worship should be alarming. Yet church leaders, in the never-ending quest for packed auditoriums and ever glitzier shows, seem not just content, but thrilled, to jettison two-thousand years of worship that had its foundations in Sacred Scripture, was practiced by Jesus and the Apostles, was passed down from the Apostles to the early church fathers and remained, with very little variation, the accepted norm for worship up until the 19th century. I’m not sure why dance was dropped in the evolution of Christianity from Judaism

The arguments advanced to support the whole Contemporary Worship model are flawed from the outset. It is disturbing that Evangelicals, the banner bearers of Sola Scriptura, are so quick to distort scripture to support such dubious claims.

The Contemporary Worship movement claims that worship is all about emotion and enlists passages such as the story of David’s dance to reinforce their faulty presuppositions about the goal and purpose of worship. I do not intend to diminish the role of emotion in the Christian life. God created us as rational, volitional, and emotional beings and all these components should help propel worship forward its intended telos. However, a worship philosophy that makes an emotional response the primary metric of successful worship is flawed. So long as emotion remains the goal and metric of worship, the church deprives itself of a God-given means of grace through which we are transformed, individually and corporately, into the Bride of Christ.

Les Lamkin teaches English and music in the Mansfield School District and is an adjunct English composition instructor at Wenatchee Valley College in Wenatchee, Washington. He is also an amateur musician who spent decades in the Contemporary Worship movement before abandoning it completely to search for a life of sacramental worship. Born and raised in Chelan, Washington, he resides there still with Patricia, his lovely bride of 35 years and their eight cats. 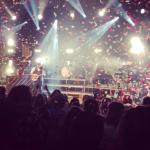 February 9, 2020
Why Are You Still Going to a Church that Does Bad Worship?
Next Post 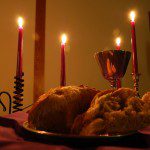 February 11, 2020 Tell Me Again Why We Don't Celebrate Holy Communion Every Sunday
Recent Comments
0 | Leave a Comment
Browse Our Archives
Follow Us! 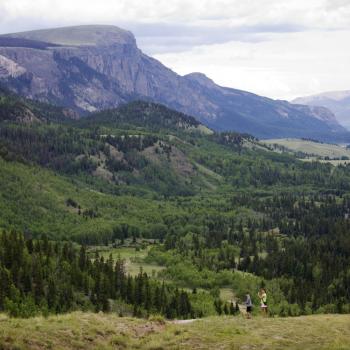 Evangelical
How Do You Solve a Problem Like a...
Ponder Anew 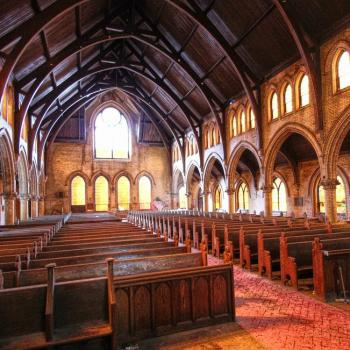 Evangelical
Seriously, It's Time to Stop Whining and Get...
Ponder Anew

Evangelical
Your Child Won't Be a Pro Gymnast, So...
Ponder Anew 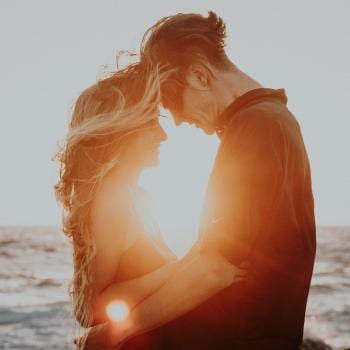