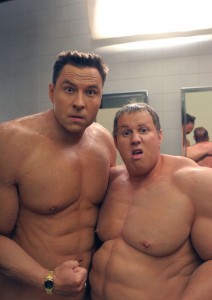 The power of the catchphrase in comedy comes from the combination of running jokes and the single, crystallized essence of the character. This is an effect the British comedy duo Matt Lucas and David Walliams have exploited to national fame in the UK in their series Little Britain (all 3 series and several specials are now out on DVD in America).  In the recently-completed HBO series Little Britain USA, the creators hope to export to the New World phrases like, “I’m the only gay in the village;” “Computer says no;” a high falsetto, “I’m a laaady!” and, “I wan’ that one,” that have become common parlance in British playgrounds and pubs.

The format is brief sketch comedy, as each week revisits familiar characters in differing situations that lead to the inevitable punch line of their catch phrase. Lucas and Walliams have woven longstanding traditions of comedy in creating their bizarro Britain, starting with their Laurel and Hardy shapes. Lucas (short, fat, bald) and Walliams (tall, thinner) are endlessly willing to expose their bodies for the cause of comedy. The jokes and characters themselves strike a balance between the broad grotesque of Benny Hill and the sophisticated absurdity of Monty Python. And of course, being British comedy, there is cross-dressing. Loads of it. What’s novel is that Lucas and Walliams don’t so much drag it up as drag it down. Rather than dressing as flamboyant drag queens or the old falsettoed pepper-pots of Monty Python, they shoot for the ugliness of the commoner – outdated hairstyles, misshapen bodies, and dowdy clothes – the un-glamour that surrounds everyday existence.

Lucas as overweight weight loss instructor Marjorie Dawes is a good example. Her plain skirt and blazer and sensible blond hair bob mask her malignant tendencies as an acrid, casually racist abuser. She jauntily waddles about, addressing her class as “fatties,” suggesting they substitute dust for their favorite foods. In the American series, there’s a hilarious exchange with Rosie O’Donnell, where Marjorie gets to combine her hatred of fatness with homophobia. We identify with both the self-loathing Marjorie and her browbeaten classmates, trapped in a society that sees weight gain as a moral failure. She’s the embodiment of the diet and exercise industries, zealous researchers, and government and health insurance bureaucrats that have convinced everyone in the UK and the US that they are dangerously fat. 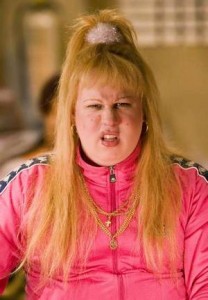 Other characters from the British series besides Marjorie crossed the pond for the HBO series. The wildly flamboyant Sebastian (Walliams) is a government aide who had a deep, unrequited love for the Prime Minister. In the American series, he has become PM, and finds himself in intimate situations with the president of the United States. Vicky Pollard (Lucas) a motor-mouthed juvenile delinquent from the council estates (housing projects) is sent to a boot camp for teenage offenders in Utah. Before long, the American girls have picked up her British street talk: “You are well gonna get it if you keep given’ me evils!” Carol Beer (Walliams) is a frumpy customer-service employee that spreads international exasperation. After destroying the banking and travel industries in the UK, she is now the receptionist in a hospital in Pennsylvania, where no matter how desperate the need of the patients, the answer is always “Computer says no.”

The characters created for the American series are hit-and-miss. The writers seem not to be able to get past stereotypes of Americans to find the eccentricities brought out so lovingly in the British characters. One standout is Ellie Grace, a girl scout (played by Lucas, on his knees) whose puppies-and-kittens expressions of affection always lapse into dirty talk. The most inspired Walliams character is Philyss, with her pet, Mr. Doggie. This sketch is hard to describe, but let’s just say if your dog tells you to take off your clothes and stand in a trashcan, it’s time to seek professional help.

The best characters in the series work on multiple levels, starting with a broad stereotype, then focusing on the particular strange obsessions of the individual. Daffyd Thomas (Lucas) is a late-blooming gay man in the Welsh mining town of Llanddewi Brefi. Each episode of the British series finds him in ever more outrageous and tight-fitting gay club wear, often see-through, exposing pierced nipples and Lucas’ own stretch marks, managing to make him a Welsh joke, a fat joke, and a gay joke all at once. What he either doesn’t realize or conspicuously ignores is that despite his famous catchphrase, the town is full of hardy miners that enjoy a little “bum-fun.” 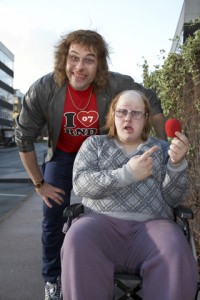 The most complex characters are housing project dwellers Lou and Andy. Andy (Lucas, in a horrifying bald wig with long stringy wisps around the sides) is a disabled man cared for by his devoted and long-suffering friend Lou (Walliams, over-permed and with teeth that have never seen a dentist). Lou pushes Andy everywhere in his wheelchair and caters to his every whim (“I wan’ that one!”) only to find that whatever Lou gets him — a drink, an ice cream, a tattoo, breast implants – is to be followed by Andy’s dismissive “I don’ want it.” The joke is magnified when Lou turns his back and Andy gets up out of the wheelchair and runs around causing mischief. In the UK, these are the most popular characters on the show. But they’ll never make it in America. Unbreakable poverty and unoptimistic disability disgust Americans. Lou and Andy will never be successful, never stop living on charity and public welfare. There will be no rags-to-riches, up-by-the-bootstraps ending. They’re just two painfully broken people who happen to desperately need each others’ dysfunction.

As may be expected in a sketch comedy show, a few of the jokes and characters go too far. The actors’ readiness to don blackface or Asian-face is disturbing, exposing unexamined ethnic fault lines in a society where whites are still the undisputed majority. (About 85% of Britons are Caucasian, according to the 2001 census.) On the gender minority front, the character Emily Howard is the least, shall we say, “stealth” transvestite in the resort town of Murky. Transgender portrayed as mustached man drag is a tired and insensitive beer ad cliché. What (barely) saves the joke in this case is Emily’s ridiculous insistence on not just dressing as a woman, but as a petticoat-wearing, Victorian “lady.”

As for other sexual stereotypes, the show presents a nonstop gallery of nancy, lisping, flouncing gay men; but the identities of the writers (Lucas is openly gay; the jury’s still out on Walliams, although the British tabloids are happy to speculate) place their broad camp portrayals somewhere on the line between gay minstrelsy and transgressive performance. 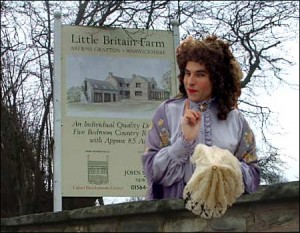 This is not to say that the show gives straight white people a free pass. One upper class family, the Pinchers, has a 25 year-old son (Walliams) who isn’t weaned and continues asking for “bitty” – breast feeding – even in the midst of social settings. Maggie Blackamoor (Walliams) is a proper British Tory who projectile vomits when confronted with any sign of diversity – from jam made by a lesbian, to a Chinese Shi-tsu, to her transplanted kidney, donated by an Indian woman. (She vomits up the kidney when she finds out where it’s from.) One character that seems to have global appeal is the conservative politician (Sir Norman Frye in Britain, a Senator in the US, both played by Walliams) getting caught in gay sex stings in public places. The official’s tortured explanations before the press of how he “just happened” to be in a public restroom where his clothes “fell off” before becoming accidentally entangled in sex with another man are evergreen comedy. Even funnier is Lucas as the stone-faced wife who always gets dragged to his side when these confessions go public.

But it’s the poor and the freakishly marginal characters that stand out. Characters like Lou, Andy, and Daffyd are so vulnerable even in their silliness as to bring about an impulse of Christian charity. If the meek are to inherit the earth and the poor in spirit are blessed, these are surely the heirs of the world. The show’s characters prove that even the most unlovable people can become lovable through repetition. We become accustomed to the quirks and weirdness, the catchphrases of character, the individual obsessions, and familiarity breeds affection.

Little Britain USA replays frequently on HBO and is available ON-DEMAND as well.