It’s not just about the tech, films, and music at SXSW anymore, and one of the highs of the festival is sure to be the premiere of American Gods, the adaptation of Neil Gaiman’s divine novel. It premieres on Starz on Sunday, April 30th. Read on for a recap of the pilot.

In the adaptation, Ricky Whittle plays Shadow Moon, a recent ex-con, who’s let out of jail three days early because his wife died in a tragic car accident. Things go from bad to worse when Shadow meets the shady Mr. Wednesday (Ian McShane), who offers him a job. He also encounters Mad Sweeney (Pablo Schreiber), who has a predilection for coin tricks and bar fights. Shadow’s worst fears come true when a chance run-in with Tech Boy (Bruce Langley) proves that working for Mr. Wednesday will be just as dangerous as he assumed. Meanwhile, elsewhere in America, we witness the love-and-praise-starved goddess, Bilquis (Yetide Badaki), who demands nothing less than complete submission, envelope her latest worshipper. 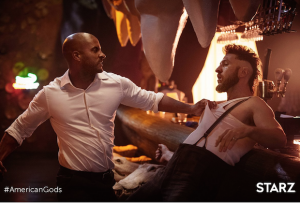 A short preview of the rest of the season revealed that the rest of Gaiman’s characters are all here–or will be–with Gillian Anderson as Media, Crispin Glover as Mr. World, and Orlando Jones as Mr. Nancy, to name a few, on tap for upcoming episodes. Fans of the book will quickly notice the requisite timeline change in order to accommodate its serialization. Otherwise, the series captures all the gore, violence, and humor that those same fans will be praying for.

At the post-screening Q and A, producers Bryan Fuller (Hannibal) and Michael Green (Logan) made it perfectly clear that this is an immigrant story. The titular American gods are immigrants, most of whom accompanied–or were later invited by–their devotees upon their arrival. The cast reflects this diversity as well. But immigration is just one of several defining themes of the series. Tied closest to the book is the notion of belief, and the series will ask viewers to consider what our beliefs do to the gods we worship and, more importantly, what those beliefs do to us. It’s also a look at the ways others use the power of belief and faith to drive us apart. Fuller, Green, and the rest of the cast talked about how recent changes in American politics and society have made the series eerily more prescient.

American Gods will be appointment television for me. If you’ve got a weak stomach or a shaky spiritual constitution (or even a solid one) be warned, it’s a wicked road trip through the American consciousness that reminds us all too clearly of who we really are.