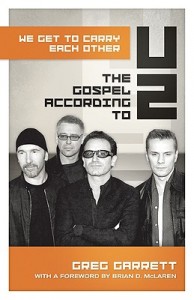 While I was living in London in Spring 2004, I came across a selection of sermons entitled Get Up Off Your Knees:  Preaching the U2 Catalog, which highlighted, in part, the very significant role that the Psalms play in the band’s creation of their songs and their role as contemporary prophets.  This sent my thinking about the band and their music into a whole different and more theological direction.  Another, more recent book about the band, We Get To Carry Each Other:  The Gospel According to U2 by Greg Garrett, has taken me a little bit further along that road.

First and foremost, Garrett’s book is a perfect example of what can happen when religious folk take pop culture seriously.  Our experiences of both pop culture products and our religious reflections or theologizing are the richer for such engagement.  Though Garrett concludes his book with a list of ten spiritual lessons we can learn from U2 (I will not recount them here…get your own copy!), he spends his greatest amount of attention on three key theological principles that shape and are shaped by the band:  belief, communion, and social justice. 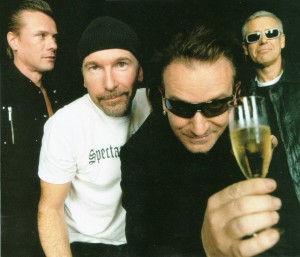 In their life and work, Garrett argues, these three issues reign supreme.  One can trace throughout their music a wrestling with belief and faith thanks in large part, as Garrett repeatedly reminds us, to their experiences of having been burned by organized religion.  Their music becomes a place where many people can turn for consolation and inspiration because, Garrett claims, they are asking the deeper questions that plague the wider society.

In the second chapter, Garrett boldly claims that we might look at U2 as a model of ecclesia…a community of believers…even though they often struggle with belief themselves.  In her latest book, The Great Emergence, Phyllis Tickle talks about the tension in church involvement between the progressions of believing, behaving, and belonging vs. belonging, behaving, and believing.  Rev. Jim Hopkins, the pastor of Lakeshore Avenue Baptist Church in Oakland, fleshed this tension out in a recent sermon highlighting the account of Thomas, the disciple who doubted Jesus’ identity but yet was counted among his followers despite this disbelief.  So in a sense, if we look to Garrett’s claims of U2 as a model of communion with one another, we see that this community transcends belief.  He gives numerous accounts of when the various members of the band have been at odds with one another and yet stuck it out…or when they have stood beside one another in difficult times, most notably when Adam willingly stood in front of Bono during the singing of “Pride (In the Name of Love)” at a concert in Arizona lest a sniper follow up on his death threats.

Finally, Garrett shows us that U2 embodies the realization that belief in a higher power and community with fellow travellers on the journey is all pointless if we’re not working to make the world a better place…living a commitment to social justice.  He cites their involvement with numerous social justice organizations, especially Bono’s well-known commitment to Africa.

Throughout, Garrett backs up his claims with scriptural and theological parallels from past and contemporary sources.  In only a few places does he skirt in-depth theological analysis, particularly regarding the nature of salvation.  His text also suffers from gender-exclusive language although he is ironically willing to admit that the terminology of “kingdom of God” is somewhat sexist.  In the end, however, his book is a quick yet inspirational read.  It would make for great devotional reading over the course of a week.  His listening suggestions (track lists) at the beginning of each chapter are great resources for some devotional listening as well.

Check out the tour video of “I’ll Go Crazy if I Don’t Go Crazy Tonight” on the home page to get a glimpse of the worshipfulness and celebration at a U2 concert that Garrett frequently cites in his book.

August 6, 2009
Teaching Religion and Film: A Review
Next Post