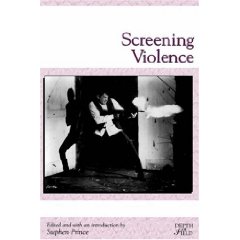 Students of religion and film or theology and film must reckon with the ever-presence of violence in much of contemporary cinema and throughout film history.  However, this is only slightly different from the engagement that theologians, religious studies scholars, and the faithful must undertake in relationship to violence in their sacred texts.  On one level, cinematic violence is less problematic than “religious” violence because at least the directors don’t usually justify said violence by claiming that “God told them to do it.”  But I digress.  The presence of violence in film always demands some response.  The hybrid students would do well to consult works from film studies like Stephen Prince‘s edited volume, Screening Violence.

In Screening Violence, Prince has collected a variety of resources on cinematic violence ranging form Jack Valenti’s (former president of the Motion Picture Association of America) speech to the National commission on the Causes and Prevention of Violence to psychological studies on the effects of media depictions of violence on real life violence.  In between, he also includes essays from filmmakers, critics, theorists, and scholars who cover topics ranging form the aesthetics of ultraviolence to the role of sex/gender in slasher films.  Prince’s own introduction to the collection provides a concise history of ultraviolence in film as well as an overview of the theoretical reactions to it.  Though some of these contributions are a bit dated (from the ’70s and ’80s), they are still relevant as the recent spate of violence at Ft. Hood and Orlando (not to mention the on-going wars in Iraq and Afghanistan) indicate.

While all of the articles are interesting in their own respects, a few stand out form the others.  Carol J. Clover‘s “Her Body, Himself:  Gender in the Slasher Film,” takes this genre perhaps more seriously than any other scholar had done previously or since.  Her analysis of slasher violence and its influence on and reactions to ideas of gender are brilliant and a bit to complex to summarize here.  You can read excerpts from it here.  Vivian C. Sobchack‘s article, “The Violent Dance:  A Personal Memoir of Death in the Movies,” is both an insightful commentary on the role of violence in contemporary cinema as well as a reflection on her experiences of cinematic violence throughout her lifetime.  She offers a succinct criticism:  “Today, most American films have more interest in the presence of violence than its meaning.  […In] today’s films […], there is no transcendence of ‘senseless’ violence:  it just is” (120).  In his introduction, Prince dismisses the argument that we are “attracted” to cinematic violence because it provides moments of catharsis where we healthily expel unhealthy emotions by participating vicariously with on-screen transgressive behavior.  Yet he never ventures an alternative as to why such violence still attracts such a large audience.

This is, perhaps, the primary question that remains at the forefront of my thinking about this topic.  What is the lure?  Why do I endure these images, a rather nonviolent person myself?  Interestingly…or ironically…studies show that even the most religiously conservative audiences prefer more violence on-screen.  Look at the embrace of The Passion and the disappointment with the Narnia series.  I am also mindful of the socio-economic location of the critics who often decry the presence of “senseless” violence in film, particularly how they define senseless.  I am left wondering if our films are not too violent, but rather if they are violent enough, to echo Devin McKinney’s distinction between strong and weak violence.

No answers, and certainly not any easy ones, exist for this eternally-debated topic.  Yet among faith-based settings, work like Prince’s might not only help us reckon with violence in our secular sanctuaries, but in our sacred ones as well.