The Rapture Exposed: A Review 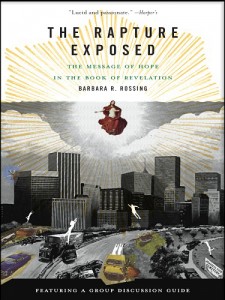 Hollywood has spent billions of dollars to visualize global destruction through natural and man-made disasters.  Religious filmmakers have spent millions trying to visualize the rapture and the apocalypse.  Conrad Ostwalt distinguishes between the two as secular and sacred apocalypses in an interesting chapter of his book, Secular Steeples.  In preparing for a lecture on blockbuster films and the apocalyptic sub-genre, a colleague recommended Barbara R. Rossing’s The Rapture Exposed:  The Message of Hope in the Book of Revelation.  Rossing’s work is at the same time an expose of a theological lie and a renewal of hope in a troubled world.Rossing comes out swinging in the first line of the first chapter:  “THE RAPTURE IS A RACKET” (1).  She continues in her book to uncover its creation, less than two centuries ago and the damage that it has wrought in politics, ethics, and theology, particularly in the United States.  Rossing points to its creation based on the vision of a fifteen-year-old Scottish girl, Margaret MacDonald, which was then amplified by John Nelson Darby, a British evangelical preacher and founder of the Plymouth Brethren.  Darby shared his ideas about the rapture on numerous mission trips to America between 18590 and 1877.  The strength, one of many, of Rossing’s text is that she takes what has become known as premillenial dispensationalism and surgically dismantles it due to its lack of any significant scriptural foundation.  Rossing takes a longer view of Scripture than rapture proponents…that is, she seems to be looking at how God has worked throughout Scripture rather than simply piecing together a handful of verses, many out of context, to create a much-anticipated time-line of rapture, destruction, and death.  Along the way, she highlights criticisms of this theological worldview form all camps, liberal and conservative, evangelical and mainline, Baptist, Catholic, Presbyterian, and the list of opponents goes on and on.

Rossing reveals that this view of God’s action in the world, and the hopes of many dispensationalists, is especially dangerous for residents of the Middle East, Jewish, Muslim, and Christian alike.  Therefore, roadmaps for peace actually become roadblocks for the rapture in dispensationalists’ minds.  Thus, there is a sick obsession with and desire for violence to hasten Jesus’ second coming.  However, Rossing contrasts this with what she calls “Lamb power,” the nonviolent way of God made manifest in Jesus throughout the New Testament and even in Revelation.  She argues repeatedly that the Bible’s vision of confronting evil is through nonviolence, the epitome of which is Jesus’ willingness to die on the cross.

Contrary to the premillenial dispensationalist vision of the Bible and geo-political events, Rossing argues that Christians are called to a renewal of the earth, not to await its destruction.  We pray this in the Lord’s Prayer:  “Thy will be done on earth as it is in heaven.”  She writes, “The Lamb is leading us on an exodus out of the heart of empire, out of the heart of addiction to violence, greed, fear, an unjust lifestyle, or whatever holds each of us most captive.  It is an exodus we can experience each day” (142).

As a way of personal confession, I found Rossing’s book so interesting because I was raised in an environment of religious fear.  Countless ministers and evangelists presented us with this worldview in an attempt to scare us into heaven.  Yet as I grew older and delved further into Scripture and experience, I realized that this worldview was contrary to what I believed to be true of God.  Thankfully, in The Rapture Exposed, Rossing has given us a passionate, thoughtful, and articulate critique of this heresy (as Bill Moyers calls it).  Not only that, she has provided us with a beautiful, life-affirming ethic grounded in Scripture that can shape the lives we live today and bring truth to the statement that while many Christians are waiting for God to act violently, God is waiting for all of us to act non-violently.