If, like me, you believe that the Dude abides, then you’ll immediately recognize the quote from which I drew the title of this post. Walter’s (John Goodman) assertion to Donny (Steve Buscemi) in The Big Lebowski is one of the funniest uses of/send ups of nihilism in pop culture. A comedic ingredient in the Coen brothers‘ most delicious dish, it no doubt would have deserved a place in Thomas S. Hibbs’ new book, Shows About Nothing: Nihilism in Popular Culture, had that theme played a larger role in the film. Hibb’s book is an examination of the effects that nihilism has had throughout the history of American (popular) culture and the abundance of shows (films and television programs) that embrace or engage it. Shows About Nothing is informative, funny, and, frequently, unsettling. 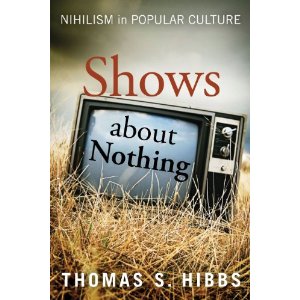 In his Preface, Hibbs poses several questions that help clarify both the perspective from which he writes and the types of shows that he will analyze. This is a welcome feature that I wish other writers would use before delving into potentially ambiguous territory. In the first chapter, he gives a rather extensive account of nihilism in American culture, both past and present. Throughout this chapter and the entire book, he heavily engages the work of Friedrich Nietzsche. Hibbs then moves into the meat of his text, a generic engagement with shows from horror to film noir to suburban melodramas to comedy and finally to fantasy.

In the second chapter, Hibbs outlines the nihilistic portrayals of evil in three films, The Exorcist, Cape Fear (both versions), and The Silence of the Lambs. In his third chapter, Hibbs tackles suburban nihilism/malaise in television programs like Mad Men and the films Revolutionary Road and American Beauty. Chapter 4 sees Hibbs taking a comedic turn in what is perhaps the most entertaining (and informative) section of the book through his analyses of films Trainspotting and Pulp Fiction and the preeminent show about nothing, Seinfeld. In Chapter 5, Hibbs presses pause on the pop culture analyses to consider the most popular reaction to nihilism in past and present American pop culture, romanticism (think Spielberg), what he considers a “simulacrum in the popular mind for orthodox Christian teaching” (156). In Chapter 6, Hibbs considers the most complex pop culture engagement with nihilism in the films Se7en, The Dark Knight, and the Harry Potter series, the latter of which provides, Hibbs suggests, the most applicable answer to the threat of nihilism in our popular culture. This is particularly ironic, in a way, given that so many Christians revile the book and film adaptations (184). In Chapter 7, Hibbs looks at the ways in which films with a heroic quest like The Book of Eli and The Lord of the Rings trilogy open up the possibility of divine providence (even in the midst of human choice) as a counter to a nihilistic worldview. Finally, Hibbs concludes with a rather hopeful reflection on the role of the arts (television and film in particular) to provide imaginative, if partial, revelations of responses to nihilism.

Hibbs’ book is a must read. Aside from some seeming editorial flaws, it is a smooth read that moves from the depressing (how will we ever get out of this mess that we’re in?!) to the uplifting (there is a way!). He’s got an impressive ability to competently move between genres from the classics to film noir to fantasy. Despite its title, the “shows” that Hibbs analyzes are really not about nothing. They are at their heart about the quest for meaning and the attempt to understand human experience of a range of emotions. In what might seem like the throw-away genres horror or comedy to so many dismissive viewers, Hibbs’ study of shows like Seinfeld or films like Se7en actually redeem them, making them continually relevant for audiences who struggle to make meaning out of similarly silly or horrific experiences. I applaud Hibbs’ subtle conclusion and conviction that self-sacrificial love and acts are the answer to the selfish and self-destructive patterns of nihilism. This is a particularly relevant message to many Christians who are engaged in the destructive practices of over-consumption that Hibbs sees as a natural result of nihilistic mindsets.

Hibbs takes a more complex approach to potentially offensive elements of pop culture (sex, violence, etc.) than do most religious observers. Unlike many conservatives, Hibbs does not see a direct correlation to on-screen violence, for example, and real world violence like school shootings. What he does rightfully fear is the corrosion of the moral imagination, which is a far more dangerous effect. The fear, and likely reality, is that our younger viewers will become like so many adults in positions of authority. Rather than finding morally creative responses to violence and evil in the world, we simply repay them with violence and evil. We can bemoan the lack of moral imagination in films, but it’s not like younger viewers have better role models in our political or judicial systems to which to turn.  Drawing from the work of Hannah Arendt, Hibbs argues that evil is always simple and banal, while good (and the doing of it) is much more complex. Unfortunatley, Hollywood doesn’t reflect this: Evil, as Hibbs quotes Hannah Arendt, is simple, banal. Good is complex. Hollywood doesn’t reflect this, as Hibbs argues, “The mysteries present in great filmmaking have migrated further to the margins of the industry, which itself has moved steadily in the direction of attracting a young audience for whom camp, irony, endless motion, novelty, and spectacle are the real draws. Audiences now seem enraptured by special effects, by the ‘capacity of the visible to exceed reality’ rather than illumine it” (238).

I don’t always agree with some of Hibbs’ criticisms of individual films or television programs, but I am always intrigued and challenged by them. His view of the unimaginative progression of Hollywood, particularly in the post-Exorcist horror genre, is correct. Hibbs writes:

Those scenes in The Exorcist did help spawn the endless one-upmanship among horror filmmakers, a competition in the surface aesthetics of evil to see who could produce, at a faster rate, ever more gruesome scenes of grotesque mutilation. It is important also to note that the scenes occur only sporadically and well over halfway through the film; attention to them has proven a distraction from central dramatic motifs of the story, which have more to do with goodness than evil. (48)

Unfortunately, much of the contemporary genre (and indeed most contemporary filmmaking) fails to rise to the standards that, Hibbs argues, are inherent to the genre/medium: “[The best horror films are] capable of raising all sorts of interesting questions about the nature of evil, about the unanticipated dangers that attend the human attempt to control and manipulate nature, about Enlightenment science, and even about the existence of God” (49).

For all of his praise of films that feature complex portrayals of good and evil and that creatively engage and overcome (?) a nihilistic worldview, Hibbs seems to miss out on the point that the protagonists often do so in very violent ways. He notes a comedic turn in the horror genre in which audiences have come to sympathize with the demonic in the film…or at least laugh knowingly at the behavior of John Doe (Se7en) or Hannibal Lecter (The Silence of the Lambs). But do we not also cheer the violent behavior of Batman, Aragorn, and their heroic counterparts? It would be interesting to see analyses of films that promote a non-violent response to violent nihilism. Doing so would only add to the great challenge that Hibbs lays before us, a challenge for us to (re)claim a/the language with which to effectively and morally speak to our nihilistic tendencies and to create and embody life-giving responses to them. If we don’t, then like the characters in the parking lot episode of Seinfeld, we will find that “there are no frontiers left to conquer, just fleeting appetites and residual desire for fulfillment” and that we have become “trapped in a semiotic hell, of which there is no clear diagnosis and from which there can be no escape” (129).

March 2, 2012
God, Godiva and Lady Gaga: A Spirituality for Lent
Next Post