In all my reading and research into film history, I came across a critique, can’t remember where exactly, that said we had all the means to visualize unthinkable devastation, death, and destruction but hadn’t the accompanying ability to depict the effects of such events and the feelings of brokenness and violation that follow. Precious few films adequately portray grief, anger, loss, confusion…in a word, trauma. Even fewer portray adequate responses, theological or not, to suffering. This theological inadequacy prompted Serene Jones to write Trauma and Grace: Theology in a Ruptured World. Theologians, ministers, and even filmmakers would do well to read Jones’ work.

There are two driving forces behind Trauma and Grace. First is Jones’ thinking about and research into trauma studies, the psychological, emotional, and physical effects of surviving trauma. As she covers this literature, she defines trauma and PTSD in approachable terms to which most readers should be able to relate. At the same time, Jones asks whether or not the Church is adequately equipped to minister to and share the good news of God’s love and grace with trauma victims, those lives that “had been so dramatically undone by violence that, try as they may, they could not seem to get the existential foothold on life that they needed to become active church participants and productive theology students, to say nothing of becoming generally happy people” (viii). Even more pointedly, she asks, “How do people whose hearts and minds have been wounded by violence, come to feel and know the redeeming power of God’s grace” (viii). The two responses should be “no” and “we don’t know.” That is, until Jones finished her fantastic book. Though she doesn’t intend it to be a definitive response to a theology of trauma (given the individuality of traumatic experiences there could never be one), it is a poetic vision of a way forward with glimpses of new avenues through which to minister to the broken, confused, suffering souls that wonder our world and fill our pews. She refers to her book as a “collection of epiphanic stories in which narratives of trauma, tales of grace, and the wisdom of doctrine are evocatively juxtaposed to provoke insight and stir imagination” (vii). Like the God about whom she writes, Jones’ work is full of beauty, grace, and complexity. Her descriptions of trauma victims are heart-breakingly honest and some will no doubt continue to disturb some readers even through the glimmers of hope that still shine through. 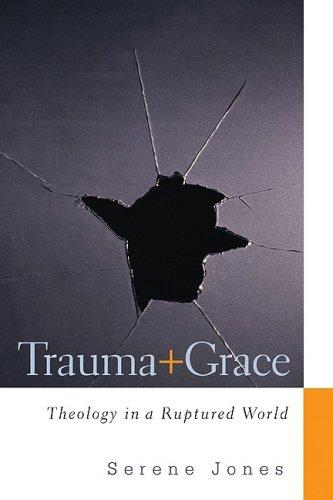 The strength of Jones’ work, one of many, is that her reflections are grounded in lived experiences of a life in ministry and theological education. It is also unfortunate that such lived experiences have yet to receive that significant scholarly, spiritual, and theological attention that they surely demand and deserve. Jones’ work has implications for individual and communal suffering, and after her description of her her research into trauma studies, she turns to individual and collective experiences of trauma, in the case a sex-abuse victim and national trauma after 9/11. She then turns to John Calvin’s commentary on the Psalms as a source of naming and beginning to heal these wounds.

In the second part of her book, Jones provides “theological poems,” brief reflections on three ways of considering the Crucifixion, (the cross as alluring, as a mirror, and as unending) that might speak a healing word to trauma victims. She begins the third part of her book by considering the Crucifixion from an creative perspective, by imagining Mary’s trauma after leaving Jesus on the cross and, on the way home, meeting a fictional character, Rachel, a mother who lost a son in the slaughter of the innocents that marked Jesus’ birth. In the imagined conversation between the two, Jones makes the bold claim that each can minister to and learn from the other.

In her next chapter, Jones considers the traumatic experience of reproductive loss. I found this to be one of the most enlightening and challenging chapters in the book as she uses this traumatic experience to shed new light on the Crucifixion and to use it as a vision to minister to women who have experienced the trauma of their bodies being a place of death. She writes, “What does it mean to know one’s self as a walking site of death itself? To have death quite literally inside you” (138). Jones then puts a theological spin on this same question: “What transpires in the Godhead when one of its members bleeds away?” Shortly after, she argues, “For the God who sent this child into the world bearing the hope of God’s eternal love, this death is a death of hope, the hope that the people who see this child will believe. It is the death of a possibility that has never been, the possibility of true human community” (148).

Jones concludes her book with a chapter on Mourning and Wonder in which she reflects on embodied responses to healing and addressing the effects of trauma. Like the rest of her book, the open conclusion is just the type of creative and care-full theologizing that our broken world needs. Trauma and Grace should be required reading for all ministers and active laity to help strengthen both the Church’s ministry to trauma victims and it’s ability to more fully understand the depths and strengths of God’s love and grace. Jones proves that the Christian tradition is full of resources to address traumatic realities if we just look closely enough. After all, Christianity is poised to be a strong voice for trauma victims founded as it is on the traumatic event of Jesus’ Crucifixion.