Lucky is a perfectly healthy (despite smoking nearly two packs a day) 90-year-old bachelor living in a dying desert town. His days consist of a morning workout routine in his underwear, coffee at the local diner, afternoons in front of the television, and evenings over Bloody Mary’s at a dive bar. Here is where we get the bulk of his thoughts on the meaning of life, our journey through it, and what awaits us on the other side as he trades jabs with anyone that will listen. His closest friend, Howard (David Lynch), isn’t great company as he grieves the loss of his pet tortoise, President Roosevelt. 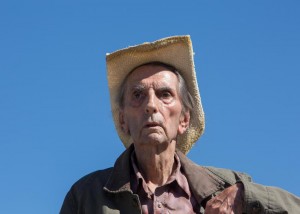 Not much happens in Lucky, which is part of its mesmerizing appeal. Early in the film, working away at one of his crossword puzzles, Lucky learns the word realist, someone who “accepts a situation as it is and is prepared to deal with it accordingly.” Of course, this is what writers Logan Sparks and Drago Sumonja and director John Carroll Lynch expect from their viewers. To wait for something to happen would be to miss the gift that is another strong performance in Stanton’s legendary career. As Lucky shuffles on down the road and the film draws to a close, it reminds us that we might find enlightment even in the most barren environments and simple stories.