Walk With Me, the documentary with unprecedented access to Thich Nhat Hanh and his Zen Buddhist community in France, premiered at SXSW yesterday. It recalls another great religious documentary, Into Great Silence, about Carthusian monks in France. Both are quiet and meditative and give credence to the concept of film-watching as spiritual practice.

I was tempted to say that Walk With Me is “about” Thich Nhat Hanh, but the film isn’t really about anything. The closest we come to learning about the community’s way of life is through a handful of narrations of Hanh’s writing, narrated by Benedict Cumberbatch. These are less theological proclamations that spiritual assertions about our place in the universe. Cumberbatch reads, “If there isn’t anything, why should I be so certain that there is?” And later, “Once you have seen the truth, you cannot avoid suffering.” Rather, filmmakers Max Pugh and Marc J. Francis, let us simply walk along with Hanh’s followers and share something, however fleeting, of the experience.

Pugh and Francis are flies on the wall, but they know where to look, and their observations do raise questions about the movements and the faithful that participate in it. Mind you, these questions are never asked specifically in the film. As with all religions, and especially those with magnetic leaders, we must consider to what extent is this a cult of personality? How much of this has become a business or a brand and what do we make of so many Westerners flocking to Plum Village, the Zen Buddhist community, and to what extent is this another case of a spiritual exploitation of Eastern practices. 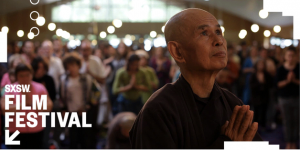 Followers and seekers can attend spiritual retreats at Plum Village, and Pugh and Francis have unprecedented access to them. As they gather for prayer and meditation, some of the participants are overwhelmed by deep emotions. I was struck by some slight similarities to the experiences of campers in Jesus Camp, even if they were more peaceful in this film.

Walk With Me includes a beautiful moment of an African American monk visiting her elderly father, whom she only sees every couple of years, in a Baltimore nursing home. The filmmakers juxtapose this with the harshness and ugliness of a Christian street preacher, who attempts to shame the monks while they meditate in public. The discrepancy is embarrassing for many of us who practice some form of Christianity.

To watch Hanh and his fellow monks at meditation and work is to realize that they are tuned into a separate wavelength than most of us. The integrity of their presence makes them feel like a separate type of person altogether. Their silence is a sound we desperately need to hear in this loud and crazy days.