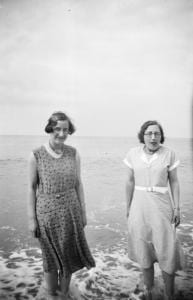 M. Michele should spend some time with these nice ladies. I bet their dresses even have pockets.

Came across a curious assortment of words on twitter last night when I should have been doing something else—like anything. Also, there are pictures. I mostly understand neither the words, nor the pictures, but let’s do the best we can, shall we?

A website called Dazed—an eminently suitable name, I feel—announces that Gucci rejects toxic masculinity with babydoll dresses and blouses for AW20. Feel pretty lame about not really knowing what AW20 is. Something about fashion, couldn’t really find it in the article or whatever this was. Anyway, #stunningandbrave is what I say. I’m glad Gucci is doing something about this terrible problem in society. You should click the link because I can’t paste all the pictures here and wouldn’t know what to say about them if I did. Let me just pull a couple of #thoughts or whatever they are, from the copy. And by “couple” I really do only mean Two.

The show took place at the Palazzo delle Scintille (where J.Lo took her star turn for Versace last season FYI). Guests walked into a sand-strewn arena where, at the centre, an enormous pendulum swung ominously from side-to-side. Between this and Virgil Abloh’s Louis Vuitton invite, the ticking hands of time are seemingly on fashion’s mind for AW20.

As I said, I don’t really understand a lot of the words. I know who JLo is, obv, but I don’t know where the Palazzo is or anything else. One thing I do know, however, is that I love Zoolander, so probably, if I had been invited to this affair, which I wasn’t, I would have had a pretty good time.

For AW20, Michele presented an array of babydoll dresses, which were paired with ripped denim jeans and grey tailored trousers, along with schoolboy looks in the form of a bright green short-suit paired with a miniature trunk bag. With fluffy blue and pink jumpers, crop tops, and some pretty flamboyant suits also featuring, Michele explained that he was this season thinking of a kind, caring ‘baby-man’ who had no time for toxic masculinity.

I guess Michele is the designer for Gucci. Anyway, I’ll say it again, #stunningandbrave, taking on Toxic Masculinity by putting men in a lot of babydoll dresses and fluffy blue and pink rompers. Seriously, you should go and click through the pictures because it’s so interesting. It is fortunate that models are supposed to look unhappy as a rule. If any of these poor creatures had been forced to smile, the effect would have been lurid in the extreme.

And I do love the idea of a “kind, caring ‘baby-man’” who has “no time for toxic masculinity” on account of fussing over his bag and trying to tie the ribbons on his very very ugly dress. We all have to do our bit, so I’m glad someone took the trouble to do theirs.

I mean, I do find it just a touch ridiculous that the only way to shrive oneself of toxicity is to pretend to be the other kind of person, but not that kind of a person in a dignified sense, but in the caricatured way that springs from an unknowing and, to borrow the language of the left, “otherizing” mind. It lacks, what do you call it, imagination. I suppose that imitation is sometimes called the sincerest form of flattery—did anyone really say that?—but this seems sort of pathetic, and lame. Women, for example, in general, don’t wear babydoll dresses, unless someone pays them to, which is a whole other kettle of fish (do fish really come in kettles? I have so many questions about everything today) and most of the women I know don’t really like to be called Baby, except if they’re being taken out of the corner by Patrick Swayze.

So, if you were going to try to work the logic through, which I see now is probably a bad idea, whoever this Michele person is is trying not to be offensive, and knows that women are better than men, but being a man (I guess? Is this person a man or a woman? I probably shouldn’t be asking, no wait, he is a man, if I’m really allowed to say that, first name Alessandro, second name Michele) and clearly, from this collection, like most men, doesn’t really understand “what it means to be a woman.”

The problem with transgenderism as it is going now is that men and women really don’t understand each other and never have, which is both a feature and a bug—a charming, adorable bug that makes life interesting and usually very beautiful. So, when a man decides that he “feels like a woman,” he really has no idea what he is saying. He feels something he has concocted from his own imagination. And in this instance here, he says to himself, “woman,” and then goes straight to, “baby,” which, in terms of category, if you were doing a Venn-diagram or something, would definitely include people (babies) who will eventually turn into women, but who are not exactly there yet. A “caring baby-man” may seem to have a lot in common with a “woman” but I’m gonna go ahead and say, however offensive this information is to the wide world, No.

Also, I don’t find masculinity toxic unless it’s horribly sinful, which sometimes it is. All people are sinful, and to one degree or another, “toxic.” There are toxic parts of my personality that make life difficult and unpleasant for other people, men and women alike. Ask my children to speak honestly about my character, and you will not get a long list of virtues—some, yes, but not everything about me is lovely. And when you stuff me unto a babydoll dress, believe me, the toxicity will rise to the level of epic. 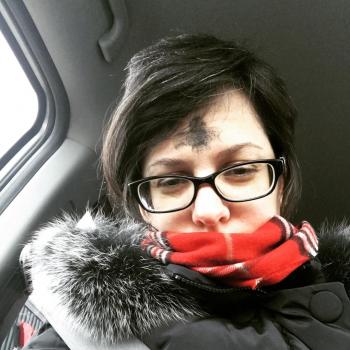 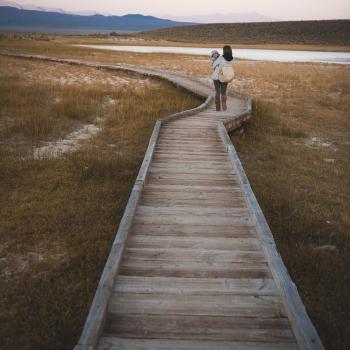