Be Careful What You Ask For

Be Careful What You Ask For September 20, 2020 Anne Kennedy 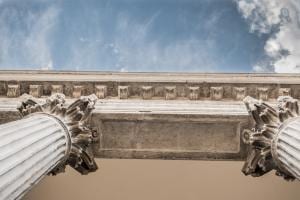 I’ve over at Stand Firm today.

It always helps, when you’re splayed out on the couch on a Friday evening after a long and disappointing week, and thinking of finally dragging your sorry self off to bed, and you look at your phone one more time and see that Ruth Bader Ginsberg has died and that the entire internet is working itself up into some kind of hysterical fit, to remember that Sunday is just around the corner. All you have to do is stay offline for twenty-four hours, and then you’ll wander into church and hear the Bible read out loud. Life being what it is, of course, you meant to read it yourself, or listen to it, but as I said, it was a long week. At least you can straggle into a pew. The clever thing about hearing the lections, thrown out there across the nave, you sitting upright, your face implacable so that no one can know all the roiling feelings and bitterness you’ve collected since the last time you were there, that the words will resound in your years at least as clangingly as the news. You can line the two up side by side and gather your wits.

And, in these tumultuous times, your wits are exactly what you need to gather up, because the time is short, though this single year continues to feel like an eternity.

This morning we have two shocks—we have the death of a famous person, whose work and intellectual acumen have shaped American thoughts and prayers in ways that most of us don’t entirely realize, and we have another Jesus/Jonah collision, where Jonah, by his life and interior disposition, provides a miniature of an unsettling truth that is “at the heart” of Jesus.

Let’s remember what happened to Jonah, in quick brush strokes. He was a prophet in Israel during a relatively peaceful moment. For Israel, God gave him many comforting words. Though Israel was certainly very wicked, yet God was her God, and was always prepared to forgive her iniquities whenever she felt sorry about them. And should Jonah’s name have remained there in a couple of verses in the middle of the Old Testament, that would have been very nice for all of them. But God thought better to strike Jonah to his core, to persecute him (not nearly as badly as Job, of course, though Jonah reacted with hysteria and shock rather than grief and heart-rending poetry). The word of the Lord comes to Jonah, and tells him to go cry out to some very wicked people about the justice and mercy of God. And Jonah is so horrified that he runs away.

Whenever I come across the experience of revulsion—either in myself or in someone else, but especially online—I always like to stop and consider what Jonah must have felt inside himself, when he discovered that God wanted to have mercy on the people of Nineveh. Imagine the people you think are the most wicked, the worst possible people who have done the most horrifying things, things that are unforgivable, and how sick you feel when you think of them. That’s the sort of feeling Jonah would have had.

I mean, there are so many opportunities to feel revulsion yourself, or watch other people feeling it, what with all the news of the world distilled onto the smallest of screens. It’s a perfectly natural and often justifiable feeling. But revulsion also carries inside it a certain kind of defiance, or even anger. Because you have to differentiate yourself from the thing that you revile. You have to know within yourself that you are not that thing, or person. And, thank goodness, because consider how great will be the judgment of God for such wickedness. And you needn’t kid yourself, the bad thing that you hate isn’t something subtle, something hidden. It’s there for everyone to see. Fox News and CNN both reported on it. And fifteen kinds of Christians got on twitter to explain what should be said about it in the pulpit this morning. There’s no brushing it off or recasting it as if it wasn’t wrong. It was wicked, and Jonah was sent on purpose to tell the people who did it that if they didn’t repent of it, they were going to die forever.

Similarly, wandering around the highways and byways of social media, I sometimes wonder what would happen if some Jonah-esque figure appeared on our shores, walking up and down to proclaim that if we didn’t stop whatever we were doing and repent, in three days we would all, and much cattle, be destroyed. I like to think this when I am watching myself complain about how bad it is, or nurturing my own sense of moral revulsion. I may be wrong, but it seems to me that the more wicked a culture becomes, the more anxious and supercilious they are about their rights, often under the guise of “justice” or “fairness.” I’m not here to knock justice, nor even the rights the founders of America believed to be given to the human person by God himself, rights we call “unalienable.” They are necessary for an orderly and peaceful society. I don’t really think we should throw them away, especially when we don’t understand them very well, or what was intended by them. But you can’t take a sort of fatuous feeling that you have lots of “rights” and read those back over the Biblical text. If you’re out in the street—or in the courtroom—crying for justice for yourself or for a group, you’re going to feel confused and angry whenever you eventually encounter the Bible.

So anyway, Jonah runs away and God catches him and sends him back, so that Jonah grudgingly does what God requires, and God has the mercy he intended to have. And Jonah sits under his vine in wroth, angry enough to die….read the rest here!

September 21, 2020 Aimee Byrd, Ruth Bader Ginsburg, and the Enneagram Podcast and Links
Recent Comments
0 | Leave a Comment
Browse Our Archives
get the latest from
Preventing Grace
Sign up for our newsletter
POPULAR AT PATHEOS Evangelical
1

Does Theology Even Matter Anymore?
Roger E. Olson
Books by This Author Books by Anne Kennedy

Evangelical
Where Is God Finding His Joy During Covid?
Preventing Grace