Lest They See With Their Eyes

Lest They See With Their Eyes September 30, 2020 Anne Kennedy 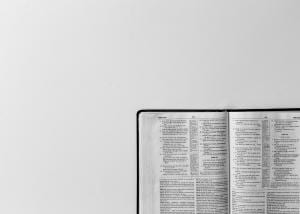 I was determined not to watch the debate last night—committed, really, as a matter of Christian virtue. Unfortunately, the person to whom I am married insisted on putting it on and watching it on his large screen across the room. So even though I did not technically watch it, shielding my eyes behind my own tiny screen, I did hear almost the whole wretched thing, except for when it was so bad that my true love actually pushed mute.

I mean, you know it’s bad when a person who loves to argue almost more than anything else in the world has to push mute. On account of how embarrassing it is—like British Office level embarrassing.

So anyway, I woke up late this morning and flipped open Ye Olde Bible and read this, because it was the next section in my regular reading through the whole thing year by year:

“Holy, holy, holy is the Lord of hosts;
the whole earth is full of his glory!”

And the foundations of the thresholds shook at the voice of him who called, and the house was filled with smoke. And I said: “Woe is me! For I am lost; for I am a man of unclean lips, and I dwell in the midst of a people of unclean lips; for my eyes have seen the King, the Lord of hosts!” Then one of the seraphim flew to me, having in his hand a burning coal that he had taken with tongs from the altar. And he touched my mouth and said: “Behold, this has touched your lips; your guilt is taken away, and your sin atoned for.” And I heard the voice of the Lord saying, “Whom shall I send, and who will go for us?” Then I said, “Here I am! Send me.” And he said, “Go, and say to this people:

“‘Keep on hearing, but do not understand;
keep on seeing, but do not perceive.’
Make the heart of this people dull,
and their ears heavy,
and blind their eyes;
lest they see with their eyes,
and hear with their ears,
and understand with their hearts,
and turn and be healed.”
Then I said, “How long, O Lord?”
And he said:
“Until cities lie waste
without inhabitant,
and houses without people,
and the land is a desolate waste,
and the Lord removes people far away,
and the forsaken places are many in the midst of the land.
And though a tenth remain in it,
it will be burned again,
like a terebinth or an oak,
whose stump remains
when it is felled.”
The holy seed is its stump.

Now, I think it’s really important to keep remembering that America is not the ancient nation of Israel. This important fact may be obvious to most of us, but there seem to be enough people wandering around who are confused. And therefore it is worth saying again: America is not God’s city on a hill. Nor is Mr. Trump King Cyrus or anyone like that. These words were spoken by God to Isaiah, who is not telling us anything about what is going to happen to our nation in the next few years. The Assyrians are not about to sweep down like a wolf on the fold with their cohorts all gleaming in purple and gold. The Babylonians are not gathering up their strength and getting ready to take over the world.

Nevertheless, the curious thing about the Bible is that God means for you to be swept up into the way he sees everything—things that happened a long time ago, things that are happening now. He gently pulls back the veil, by means of the text, and lets you see that he is sitting on a glorious throne, that the hem of his robe is trailing over the cosmos, that the angels are calling out to each other in wonder and adoration about his holiness and beauty. And that, in contrast to that wondrous vision, all of us here on earth go on looking at the ground, castigating each other for our dull hearing, our blind eyes, our un-understanding.

When you read the words, you’re meant to lift up your voice and cry out, “How long, O Lord,” because God is always God, and you are always a creature, and things are always bad. And that being so, the Savior that God promises to Isaiah is always your Savior, he is as much for you as he was for Uzziah and Hezekiah and Cyrus and Isaiah.

So God has given us two fools to choose between, as he did the last time. He has put before our dim eyes the truth about ourselves, again—which is a mercy. Because if you can’t see how ugly and wretched you are in your sin, you will never look up to behold his astonishing beauty.

October 1, 2020 The Trees Are Pretty Good This Year
Recent Comments
0 | Leave a Comment
Browse Our Archives
get the latest from
Preventing Grace
Sign up for our newsletter
POPULAR AT PATHEOS Evangelical
1

Does Theology Even Matter Anymore?
Roger E. Olson
Books by This Author Books by Anne Kennedy