Maybe It’s Not All Bad 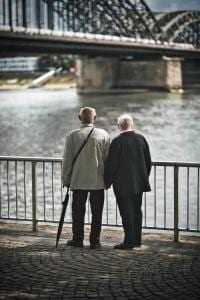 Along with my personal refrain—2020 Must Be Destroyed—I’ve also gotten into the habit of saying “Covid hasn’t been good for anyone.” It’s a helpful trick of mind I’ve developed to de-escalate the grand sense of cosmic chaos that has swept over the world this year. It’s always kind of rotten when you find yourself suffering when no one else is. You get sick, or your child breaks her arm, or you lose a job, or whatever, and your life is thrown into confusion, but everyone else appears to be trucking along fine. So that on top of everything else, you also have to cope with the spiritual trial of envy. Which is pretty rotten. Because not only is your life terrible, you yourself are also really bad.

The whole world beset by some horrible trial all at the same time is an unusual experience for most of us in the west. We heard about it from our grandparents, we’ve read about the war and the depression, but the upward trajectory of material prosperity and the narrow focus of all war (something people go to and return from, and that’s it) means that no ordinary person expected to suffer. So it helps, in the middle of it all, if you remind yourself that this isn’t good for anyone. Everyone is having a bad time. 2020 must be destroyed. Immediately all the suffering is gathered up into a community of tribulation. The envy dissipates into the bright autumn air, and I affix my mask to my face and just try to cope.

But there have been some good things to come out of covid. The chief one is that lots of people have noticed that life, as it’s been lived for the last several decades, is insane. The expectations are wondrous, and not in a good way. A lot of things that we’ve taken for granted should be thought about more carefully. Take a gander at this piece—Millennials Are Trying To Shake The Stigma Of Moving Back In With Their Parents:

A new Pew poll reveals that a majority of young adults (ages 18 to 29) are now living with their parents — surpassing a record set during the Great Depression. These numbers have only increased as lockdown has ground on: The Pew poll says that 47% of young adults were living with at least one parent in February; that number climbed to 52% in July. According to Pew, the trend encompasses “all major racial and ethnic groups, men and women, and metropolitan and rural residents, as well as in all four main census regions.” And though our cultural conversations about adults moving back home focus on a “boomerang effect” of younger millennials and Generation Z — facing an uncertain economy and diminished prospects for employment — swooping back into newly emptied nests, the pandemic has sent those of us who are in a slightly older cohort (which a Zoomer daughter of a friend affectionately dubbed “grandma and grandpa millennials”) climbing back into nests that may be a bit cobwebbed. “I’ve [seen] a lot of young professionals that maybe haven’t bought their first homes yet pick up and move back home,” said Dea Dean, a marriage and family therapist. The chief reasons, she noted, “are to save money, or because of job losses,” though she’s also seen parents of young children who are spinning the plates of work, schooling, and all-around childcare seek helping hands from extended family.

Knowing that she could ensure her parents followed quarantine — she personally got her father to adopt teleworking and start using hand sanitizer — also helped ease Xian’s mind: “I felt I was protecting my parents more by being with them because then at least I knew if they were behaving or not,” she jokes. “I see it this way: One day, I will maybe have a family of my own and not have as much time for my parents as I do now.”

But really, here is the money bit:

“One day,” these days, feels like the sunrise of some distant horizon. I’m learning to let go of the expectations I had for myself before I showed up on my mother’s front porch with a suitcase and a hope that this would all be temporary. I miss the silence of an empty house; I miss having a space that is unequivocally mine. My desires are smaller now: that I can keep everyone close to me safe and well; that I will not take my dinners alone, night after night. They may not be grand, but they must be enough.

I really like that line—“my desires are smaller now.” Except that I would say that they aren’t really smaller they are better. One of the chief griefs for me, in the time of covid, has been anxiety over people who have been shut away from the community of the church and family, for their own safety for the most part, into nursing homes and other kinds of places where no one but medical professionals can get at them.

In some cases, for the very medically fragile, this makes a lot of sense. But I think more also, as tight-knit communities have had to “distance” from each other, and have been pushed online, that the shocking and unlooked for discovery—that isolation is not actually good, it isn’t useful, it doesn’t help anyone in the long term—is deeply and wonderfully good. Extended families being able to take care of each other, the old being able to help the young, the young worrying about and fretting over the old, the task of childcare not devolving onto a single woman who also has to pull in a certain number of dollars every week to make life go, is sane.

We’ve tried to solve all our problems by atomizing everything by age and life situation. The child goes to daycare instead of sitting on the floor at the feet of a grandmother. The mother and father go away to separate places of work. The grandmother goes into a home. And then the pandemic hits and you never get to see grandma ever again, and all the children are exhausted by screens, and the parents by anxiety. No amount of government help can replace all those people being able to look each other in the face over the dinner table at the end of a long stressful day, helping each other emotionally, materially, and spiritually towards a peaceful, ordered life. Throw in God, and you can discover something that generations of people around the world have always known.

So yes, shutting down for a short time has been awful, and certainly ignited much of the political chaos we’re enduring, but perhaps, if a generation of youngish and oldish people can discover something sane—that being together is good—then maybe covid hasn’t been as bad as I imagined.

September 30, 2020 Lest They See With Their Eyes
Recent Comments
0 | Leave a Comment
Browse Our Archives
get the latest from
Preventing Grace
Sign up for our newsletter
POPULAR AT PATHEOS Evangelical
1