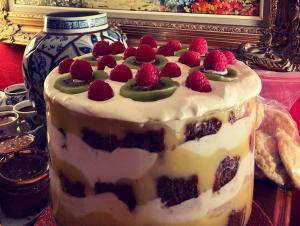 There’s a little dusting of snow, so that is pretty epic–that’s a joke, it’s not epic at all it’s just Friday.

One of the strangest things about 2021 is that I started going with Matt on his long terrible walks early in the morning. As far as I can make out, we go about 3 miles at a horribly fast clip, me practically running to keep up, and also trying to keep up my end of the conversation. The first four months of doing this were just plumb awful. It never got any easier and I was sore all the time and tired. But that turned out to be because my thyroid med was off. Once I corrected that, the walking got physically easier. But also, for the sake of pop-psychology, I started rewarding myself. As soon as I walk in the door and beat my way out of my sub-zero snowboots and coat I sit down and eat half a tub of hummus with half a cucumber. By thinking about that tub of hummus for the whole second half of the walk I am able to keep trotting along on my sore stumpy legs.

The sickening thing, though, is that walking this much has produced ZERO loss of pounds from my wretched flesh. Back in the day, if I had been taking a walk this epic, I would have become thin. Now, to become thin, I have also to eat less of everything and lift heavyweights. I should only eat a quarter of a tub of hummus, and a thin sliver of cucumber. But what kind of reward could I possibly offer to myself for eating even less? I have no idea and don’t even want to think about it. It’s just not true, as some foolish person said, that nothing tastes as good as thin feels. That is the greatest lie ever told by some of the people who tell lies.

The question of rewards is why I love the audible app as opposed to one of the many excellent free options out there. Of course, I am paying through the nose for the books that I listen to. But the way audible organizes things, by doling out my credits one by one, and then reminding me about all the “free” stuff that’s “included with my membership” my dull brain is spurred on to love and more reading. I think, ‘Oh! I’m getting a new credit today! What shall I read!” instead of any of the usual depressing beating-my-body-to-make-it-my-slave thoughts that comprise so much of the Christian life.

I’ve been thinking about this all week after reading that discouraging article I blogged about earlier–the one with the famous poet who thinks that Jesus didn’t welcome the thief on the cross who didn’t repent only because he was a fool and didn’t deserve it, as if the one who repented did somehow. There are other and better ways to understand the thief on the cross, and that’s this one:

What a strange reward! To look at Jesus, want to be with him, and then be with him. That should be enough for me, of course, and sometimes it is.

I mean, I often feel that the hardest thing about being a Christian is that Jesus is the reward that you get. So many of us languish in the pew, hoping we’ll get something cool. We persist because there are so many promises of nice things–eternal life, not dying forever, crowns, feasts, decent clothes, being with people without rage and hatred contaminating everything–but as you go along, and God takes more and more nice things that you were enjoying very much away from you, the horrifying thought that Jesus himself is what you are promised begins to dawn. Then you wrestle with that for a long time, wondering if it’s going to be worth it.

This, incidentally, is why I, among others, am so irritable (to put it mildly) about the shifting sands of covid #thoughtsandprayers from the CDC. It occurred to me recently that if people in the government had really done the “psychological research” they are only just remembering exists, and gotten advice from Zuck, they would have noticed that American’s very favorite phrase in the world is “Ask your doctor if ____(insert new medication here) is right for you!” Americans love rushing off to see if new medicines might be right for them–and quickly obsolete exercise equipment–and apps–and every other kind of fad that makes so many brilliant promises that never live up to the hype. (Except my thyroid med, I love that stuff so much.) The minute you tell someone they have to do something, that’s the minute they don’t want to do it anymore. But if the covid vax had been packaged in a peloton bike! Imagine the possibilities!

So anyway, I’m trying to devise new rewards for myself for this new year. I have to attach something tangible to the various disciplines that I know I ought to keep because I do love Jesus. And he is totes enough for me, for real, but also, I probably better eat some chocolate while I’m reading his special book.

Have a nice weekend! 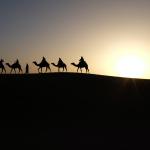 January 6, 2022
You Shall See And Be Radiant
Next Post 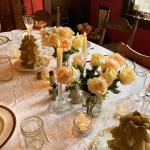 January 10, 2022 Schadenfruede and Seppuku Podcast and Links
Recent Comments
0 | Leave a Comment
"I'm sorry to hear that (ie 2.) I do hope if you get to enjoy ..."
LucyL 7 Takes In All Directions
"I want any song I sing in the worship of God to make grammatical and ..."
Charlie Sutton That’s Not How Any Of This ..."
"I'd never heard of Norm McDonald and I'm glad you've introduced me to him. I ..."
Summers-lad Death on a Wednesday: John Shelby ..."
"For it is in giving that we receive,in pardoning that we are pardoned,and in dye ..."
Eponymous1 He Was A Bad Bad Father
Browse Our Archives
get the latest updates from
Preventing Grace
and the Patheos
Evangelical
Channel
POPULAR AT PATHEOS Evangelical
1

What I Learned from Designing Women...
Anxious Bench
Books by This Author Books by Anne Kennedy