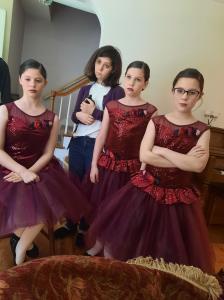 Oh well, look, here is the “dawn,” back again in all its snowy grayness. I guess that means I had better think about some things. The first of which is that my children, though not nearly so cute as they once were, did make me laugh out loud yesterday. One child walked into the room where I was languishing, and, unprovoked, made this announcement before walking out again: “If I could choose to be born at any time on earth I would choose to be a millennial because I would always have the moral high ground.” She would provide no explanation so I don’t know what brought this enlightening idea into her head. But THEN, reading the essay of another child, I stumbled upon this brilliant witticism: “Add to this the fact that the book is relatively short and it almost justifies the price.” Am I raising a household full of mini-Christopher Laschs? I sure hope so, because two weeks ago I read this and it’s been jangling around in my head:

In fact, the cult of intimacy originates not in the assertion of personality but in its collapse. Poets and novelists today, far from glorifying the self, chronicle its disintegration. Therapies that minister to the shattered ego convey the same message. Our society, far from fostering private life at the expense of public life, has made deep and lasting friendships, love affairs, and marriages increasingly difficult to achieve. As social life becomes more and more warlike and barbaric, personal relations, which ostensibly provide relief from these conditions, take on the character of combat. Some of the new therapies dignify this combat as “assertiveness” and “fighting fair in love and marriage.” Others celebrate impermanent attachments under such formulas as “open marriage” and “open-ended commitments.” Thus they intensify the disease they pretend to cure. They do this, however, not by diverting attention from social problems to personal ones, from real issues to false issues, but by obscuring the social origins of the suffering—not to be confused with complacent self-absorption—that is painfully but falsely experienced as purely personal and private. The Culture of Narcissism: American Life in an Age of Diminishing Expectations (p. 30).

Indeed, I think of this long paragraph now every time I come across the word “normalize.” We are taught to “normalize” this and that–the first, I think, was self-care, but now it is almost everything. Someone is unhappy, usually by feeling a deep sense of alienation from what appears to be a “majority” culture. In an effort to rejoin a community from which they feel excluded, they bring their own alienation to the fore as the means of their entrance into the group. The group is enjoined to “normalize” whatever it is that the alienated feels is the core of their alienation. That should solve the problem. But by the end of the process, everyone is unhappy.

The trouble is, it’s all an elusive dream. Though there are some strong communal and familial attachments between some people, in a larger sense, everyone today feels deep alienated from the culture as a whole. Perhaps, in the past there might have been strong communal attachments between locally bound groups of people (forgive me, I am being sarcastic, of course there were) that mitigated against this feeling, but now there is really only Instagram. Moreover, because there are so very few strong communities, the desperation for a relationship with anyone at all takes on a devouring hue. ‘You have to come over to me,’ says every single person. ‘I can’t come over to you because I am in so much pain. Come to me, all you who are alienated like me, and I will eat you up.’ “Normalize” loving and accepting me for no other reason than who I am.

Of course, the best way out is to seek and find someone who supernaturally makes communities by his divine power, transforming people into his own image. You have to climb out of yourself in order to be able to be joined to other people in love, to mitigate against the real isolation and loneliness. It seems like it can’t possibly work, but it does.

Well, I must rush to the next thing. Every child has something due and so my life is not my own today. Hope to be able to think longer about something tomorrow.

January 18, 2022
While Congratulating The Winner Of Course
Next Post

January 24, 2022 What Happens When You Become Affirming Podcast and Links
Recent Comments
0 | Leave a Comment
"The depraved don't know that they are depraved."
Charlie Sutton Don’t Lose Heart
"I'm sorry to hear that (ie 2.) I do hope if you get to enjoy ..."
LucyL 7 Takes In All Directions
"I want any song I sing in the worship of God to make grammatical and ..."
Charlie Sutton That’s Not How Any Of This ..."
"I'd never heard of Norm McDonald and I'm glad you've introduced me to him. I ..."
Summers-lad Death on a Wednesday: John Shelby ..."
Browse Our Archives
Related posts from Preventing Grace