Liturgy: The Work of the Church

Note: This post is part of the Public Square series on rites of passage.  Read more here!

Our church scheduled its Nursery Worker Appreciation luncheon on the same day as its High School Senior Recognition luncheon this year.

For just a second, I was really, really annoyed.

“Why on earth would they deliberately schedule such a conflict? Parents can’t be at both luncheons at the same time. What were they thinking???” I all but screeched at my husband.

“Probably that nobody would need to be at both luncheons at the same time?” he very mildly replied.

It’s true. Vanishingly few people at our church have both a child in the nursery and a child graduating from high school. (Only a couple with four graduate degrees between them have the combined stupidity to come up with such nonsense.)

We ditched the nursery workers, despite our profound gratitude for them, and lunched with our graduating senior, because we figured we had four or five more years to appreciate our nursery workers.  (Hopefully, four years from now, no one will schedule College Senior Recognition Sunday the same week as Nursery Worker Appreciation Sunday.  Because my head will officially explode.)

But the scheduling hiccup brought something that I’d been half-thinking (or not thinking) about all year right to the forefront of my mind.  As I sat through the Senior Recognition service, watching my oldest participate in the worship service and be honored for his accomplishments, I remembered being in exactly the same pew just a few weeks ago, waiting for my youngest son to be baptized.

I wondered whether I’d be sitting in the same pew eighteen years from now for my fourth and final Senior Recognition Sunday.

It’s about forty years too early to judge how well we’ve raised our oldest son to love and serve God.  It’s been a lot of work, and it’s hard to know whether we’ve done the work well.  We’re hopeful (and there are some signs that our hope is not mere wishful thinking) that he will grow to be not merely happy and successful, but good.

I remembered the first day he came home from maternelle, the Catholic kindergarten we sent him to in France, when he was five years old.  He came home with a coloring page of the nativity.  It was the first time he’d brought something home from school, and it was something about Jesus.

I stared at it.  “What is that?” I asked.  “La Sainte Famille!” he chirped.  “We colored it!  Madame said that my coloring was pas très élégant.”  I had no hope for his coloring skills, but I did feel a burden lifted.  I don’t have to do it alone.  My son would not grow up believing that the whole Jesus thing was some crazy idea his parents made up.  Other people, people he cared about and listened to, would be sharing Jesus with him.

I remembered the time his children’s choir director asked me to leave the room.

He had been pretty disrespectful with her, and I’d been sitting at the side of the room with the other parents, calling him to me and chastising him every time he was rude to her.  She told me at the end of the session that it was her job to make him treat her with respect, and that I could trust her to treat him respectfully while she was teaching him to treat her right, too.

I remembered the plain-spoken pastor we had during his elementary school years, who always used accessible sermon illustrations.  We would have lunch after church, and our eight-year-old would bring up something from the sermon that he’d understood and wanted to talk more about.

I remembered the hipster pastor we had during his middle school years, who injected just enough silliness and fun into the worship service to hold a twelve-year-old’s interest.

I remembered the Confirmation Class teacher who really helped him understand what commitment meant, and the youth group coordinator who scheduled as many service opportunities as she scheduled social events.

I looked at our current pastor, who gently but decidedly weaves social justice issues into his sermons, feeding his current developmental stage (Moral Crusader) in a good way, letting him know that other Jesus people felt the same way about injustice, too.

We didn’t have to do it alone.  We haven’t, not at any stage of the game.

The church has been there every step of the way.  We’ve been in eight or nine different churches, and yet The Church has in every place done exactly what it ought–pointing my son to Jesus, being the Body of Christ for him, calling forth the Spirit’s work in him, living out the Gospel in compelling and winning ways.

It’s no small reassurance, tempted as I was in the month between our baby’s baptism and our young man’s graduation to worry over what the next eighteen years would bring, to worry that my aging body might not have quite the energy to bring to the work of raising him that I was able to expend on my oldest, to worry that the work of educating other people’s children might somehow leave my youngest child less well off than my oldest, at least when it comes to the work that matters most to me.

It’s no small thing that the work is not my work.  This is what his baptism has meant, of course: he has been grafted into a church that has promised to do its work. 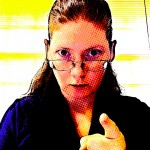 April 30, 2015
5 Ways to Breathe Life into Workplace Conflicts: Do Not Embarrass Your Mother
Next Post 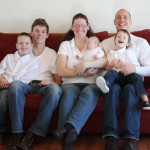 May 8, 2015 Misdiagnosing the Disease of Mother's Day
Recent Comments
0 | Leave a Comment
Browse Our Archives
Related posts from Profession of Faith 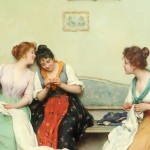 Faith and Work
Holy Gossip: Taming the Tongue while Telling Our...
Profession of Faith 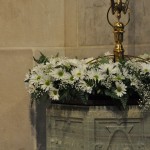