Misdiagnosing the Disease of Mother’s Day

I’m so glad I have Facebook to remind me that Mother’s Day is coming.  Usually, the end of the semester is so busy I can’t remember that dinnertime is coming, but I can rely on Facebook to trigger my memory.  Starting the first day of May, usually, my feed fills with a litany of sappy memes, sponsored ads, tributes that range from the clumsy and awkward to the profoundly moving, and, lately, links to articles and blog posts proclaiming everything wrong with Mother’s Day.

Well, hate is too strong a word, maybe.  Most years.  Let’s say that I’m not a fan of Hallmark Holidays in general, and this one makes my nose curl just a little more than the others.  (All the others, except Father’s Day, which I actively hate.)

But not because it “perpetuates the dangerous idea that all parents are somehow superior to non-parents.”

It does perpetuate the lie that if you do not love your mother enough to feel sappy about her on Mother’s Day that there is something wrong with you.

It perpetuates the lie that if your children do not feel sappy about you on Mother’s Day that there is something wrong with you.

It perpetuates the lie that you can ignore, criticize, complain about, and devalue the work of mothers 364 days in a year as long as you say something sweet about them that One Official Day.  (Of course, now you don’t even have to do that: you can spend Mother’s Day criticizing, complaining about, and devaluing Mother’s Day.  Mom still gets ignored.)

It perpetuates the lie that commercial and liturgical celebrations are indistinguishable from each other, and that if you can look good on the holiday, you’re probably getting the whatever-it’s-celebrating thing right, too.  (Christmas, Easter, and weddings were getting lonely on that particular list, you know.)

It perpetuates the lie that scheduled, commercialized, forced sentimentalism is the same as genuine, healthy, wholesome, richly moral sentiment.  (Let me tell you, people, if all your kisses begin with Kay, there is something wrong with your love life.)

But it doesn’t perpetuate the lie that mothers are better people than non-mothers.

And, honestly, given how ruthlessly mothers’ hard, good, important work is devalued and discounted in society, and given how ruthlessly all work is devalued and discounted when it is done by women (the economic language is not used metaphorically there), I’m a little skeptical of attempts to manage Mother’s Day by making recognition for mothering, as you say in your last paragraph, “available to all.”

I’m a little reluctant to say that there is no difference between a sort of diffuse human kindness and the quotidian work of diaper-changing, snot-wiping, educating, feeding, moral-forming, morale-building, anger-diffusing, sibling-rivalry-managing motherhood.

I’m not at all reluctant to acknowledge that parents don’t do all that work themselves.  (In fact, I think I just said something about that.)  And I think all of us could stand to be less reluctant to acknowledge that human beings grow to moral maturity because of the loving kindness of many people, not all of whom are the people that bore them or raised them.  I know all those whom you acknowledged, Anne–the circle of mom-friends and Mom’s friends and friends’ moms, the gay men–as a formative influence on your mothering will appreciate hearing your word of thanks.

But I think the actual, daily wiper of dirty bottoms does something that those other loving people don’t do.

Let’s not kid ourselves: we all return to the state where we need our bottoms wiped for us again.  Don’t we want to thank the people who are raising the people who will wipe our bottoms for, you know, trying do a good job of it?  Don’t we want caretaking to be held in honor by all, even if only for the selfish reason that we will all probably need that kind of care again?

We’re better at honoring breadwinners than bottom-wipers, just as we’re better at honoring surgeons than nurses, and pilots than mechanics, and chefs than dishwashers, and CEOs than janitors.  I’m not sympathetic to criticisms of Mother’s Day that share in that refusal to honor caretaking.  Blurring the boundaries between parenting and the supportive community that makes parenting possible doesn’t make the community more likely to offer support.

I’m glad to know you haven’t raised your son to be concerned with Mother’s Day, Anne.  He and my boys will have something in common, if they ever meet.  I’m trying to teach my boys to respect me, to respect unglamorous work, to respect women, to respect the hospitable and the generous and the kind, to respect any expression of care when it is offered.  And I don’t think of Mother’s Day at all when I think of all the ways I want them express that respect.  The holiday does very little of what it claims to do–honor the work of mothering–and still less to redress the inequities that most mothers and other caretakers will struggle against their entire lives.

I’m not a fan of Mother’s Day, neither of the overweening sentimentalizing of motherhood, nor of the clumsy attempts to spiritualize or democratize what it celebrates.

But I am a fan of my mother.  She has been a good mother, and that is worth celebrating.

But, you know, I’m a fan of the acknowledgement, too.  I hope my children–in their own way, with their own perfect expressions of love, on whatever schedule they keep, and by whatever moves them to do so, and with complete and total indifference to the industry of affection-buying and -selling according to the commercial calendar–let me know that I’ve mattered to them. 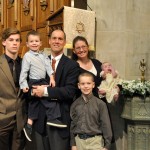 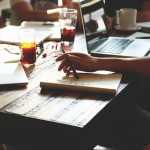 Faith and Work
Liturgy: The Work of the Church
Profession of Faith