What Are the Chances that James Comey Saw “Three Days of the Condor”?

Political and social conservatives in the U.S. constantly lament that the mainstream institutions — universities, the media, the press, and sectors of the government — have become centers for the kind of sentiments that animated the anti-Vietnam protesters of the 1960s and 1970s. Those opposed to the war (and in favor of drugs, sex, and rock ‘n’ roll) believed the war was immoral, that the American government had deliberately deceived the public, and that the United States was not on the side of truth and goodness but through political and economic excess had become an enemy of justice and freedom. According to many conservatives, the university and college students marching in the anti-war protests went on to careers in higher education, Hollywood, journalism, and the government. They returned to the mainstream after the detour of sit-ins and protests. The country, consequently, is split between those who either believe America is great (folks in the heartland) or those who not only doubt American exceptionalism but often suspect the nation is guilty of great wrongs (racism, sexism, economic inequality).

For this reason, the press and academy’s reaction to the Devin Nunes memo and its release by President Trump must be consoling to conservatives. For instead of chiming in with worries about the size of government, its capacity to abuse power, its violation of liberties at home and abroad, many mainstream commentators are worried that the Republicans are doing to national institutions what the anti-war Left was doing in the 1960s — they are abandoning recklessly the rule of law and social order that comes with it.

Consider, for instance, a few of the reactions from historians (courtesy of John Fea). Meg Jenkins from Princeton University observes:

The memo scandal is a move on behalf of the White House … to tarnish the reputation of the FBI and of the Justice Department, and by extension call into doubt the motives of the Mueller investigation. In that way, it takes us further down the path of turning every development in the investigation into a partisan ploy.

That, of course, is nothing new — think of the attacks on Kenneth Star by the Clinton White House. But here, the charges are not simply that Mueller is an overzealous prosecutor, but rather that the FBI tried to help throw an entire election. The House memo seems like it will suggest that the FBI was implicated in an attempted coup. The long-term significance of the memo release is that it may confirm for some how few in government can be trusted to act in an independent and honest way, even the FBI —which has historically been seen as beyond the partisan fray.

Then this from Carol Anderson at Emory University:

Yes, the independence of the FBI is under siege. Bringing an independent judiciary and investigative branch under the domination of the executive is one of the first moves of regimes that do not respect the rule of law. Pinochet’s Chile. Nazi Germany. The Soviet Union. Putin’s Russia.

The rationale is simple. Besides the military, the judiciary and law enforcement branches are the most powerful in a state. Control and politicization of that wing allows the ruler to criminalize his opponents, to label them enemies of the state, when in fact those so-called enemies are really defenders of a more viable, democratic nation. That is why they are a threat.

So these historians take the side of the FBI against Trump. Again, what a reassuring circumstance. Now the academy is on the side of law enforcement officials as long as they are federal agents. Whether these historians are still worried about police around the nation the way Black Lives Matter is is another question.

Michael Sean Winters, an op-ed writer at National Catholic Reporter, speaks for many in the press (when was the last time you could say a Roman Catholic spoke for secular journalists?) when he concluded:

The danger in all this hoo-ha is that important institutions that keep our democracy stable are being undermined. Our intelligence services, praised by Trump when they investigated his political enemies, are having their veracity and integrity challenged at a time when they continue to be at the forefront of our nation’s efforts to combat terrorism. Our press corps, always a principal means of holding the power accountable in a free society, are demeaned by the president or co-opted into becoming propaganda agents.

Again, what a remarkable development for the rule of law in the U.S. when the press and university professors defend the federal government’s intelligence and surveillance agencies. Or could it be that if critics of evangelicalism are going to observe the hypocrisy of THE EIGHTY-ONE PERCENT, they might also notice the hypocrisy of those who worried about the Patriot Act now giving a big wet kiss to the CIA and the FBI?

In ways comparable to the sudden reliability of women’s memory compared to the skepticism that greeted those who in the 1990s charged priests with sexual abuse, today’s critics of House Republicans don’t seem to be aware of the deep suspicion that Americans had during the 1970s about abuses by the CIA and FBI. Even Hollywood nurtured such fears through movies like the one in which Robert Redford and Faye Dunaway starred, Three Days of the Condor:

“I’m not a field agent, I just read books!” As directed by Sydney Pollack and starring his long-time collaborator Robert Redford (the two did seven films together), Condor is a fine piece of mid-70’s paranoia. A bookish CIA officer operating out of the New York-based “American Literary Historical Society,” Joe Turner’s job is to read lots and make connections. He goes out to pick up sandwiches for his co-workers, comes back to find everyone blown away, goes on the run, hijacks Faye Dunaway and the pair have soft-lit 70’s sex. Max von Sydow tries to kill him, but he’s too old. It’s all very 70’s, as evidenced by the jazz-funk stylings of the title sequence. Which makes sense, for between this, The Parallax View, All the President’s Men, and The Conversation, that decade almost perfected the paranoid thriller genre.

Errol Morris’s Wormwood, which arrived on Netflix and in some movie theaters Friday, is a mind-boggling story involving LSD-spiked Cointreau, allegations of biological warfare against the U.S. government, Project MKUltra, mind control orchestrated by an allergist and a magician, and a son’s obsessive quest to find out why his father plummeted to his death from a 13th-floor Manhattan hotel room. . . . Released as a six-part series on Netflix, and as a 240-minute long film in theaters, it combines interviews and archival footage with staged dramatic reenactment of events before and after the 1953 death of Frank Olson—a military scientist whose supposed “suicide” was complicated when the Rockefeller Report of 1975 revealed that he’d been secretly dosed with LSD.

Are we to suppose that only Devin Nunes and the rest of the Republicans on his committee watch Hollywood’s productions about government conspiracies?

At the same time, do these historians and journalists not remember the other side of James Comey:

One of those powerful people is FBI director James Comey, who likely used the pseudonym “Reinhold Niebuhr” on his Instagram and Twitter. Comey had written his undergraduate thesis on Niebuhr’s call to public action 1982. “Niebuhr’s book Moral Man and Immoral Society says it’s not enough to sit in an ivory tower,” Comey later reflected about his decision to go into law enforcement in an interview with New York magazine. Referencing his son’s death, 9/11, and the Holocaust, Comey asserted that “it is our obligation as people not to let evil hold the field. Not to let bad win.”

Comey became the U.S. attorney in New York City in January 2002, just months after the tragedy of September 11, 2001. He argued that Jose Padilla, who was accused of planning to set off a dirty bomb in New York, had no right to a defense lawyer. Padilla, a natural-born American citizen, spent three and a half years in a military prison as an enemy combatant. In 2004 Comey became assistant attorney general in the Bush administration and signed off on the CIA’s use of waterboarding and other forms of torture. In his role as director of the FBI, he has been in charge of programs that surveil Muslim Americans, prosecute domestic terrorism, and prevent would-be terrorists from infiltrating the United States.

Gene Zubovich, who wrote those paragraphs, doesn’t let Comey’s appeal to Niebuhr obscure the sinister stuff that the CIA and FBI have done.

Do Comey, Obama, and other powerful people read Niebuhr because he tells them to act with humility and caution? Or is it because Niebuhr tells them that moral men have to play hardball? The most likely answer is both, and we should find that more than a little troubling.

So why do historians and journalists only see law and order (the way Richard Nixon did) when Republicans worry about the government? 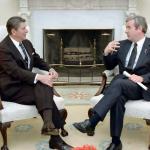 February 2, 2018
If Not for Politics, Would Anyone Care about Evangelicalism?
Next Post 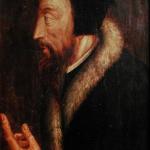 February 9, 2018 Is Calvinism Un-American?
Recent Comments
0 | Leave a Comment
Browse Our Archives
Related posts from Putting the Protest in Protestant