Evolution of the Pro-Choice Mind: Movement Toward Dialogue

For many years the pro-life and pro-choice movements have been speaking past each other.

The pro-choice movement gives a cacophony of different criteria for determining when life (that has a right to live) begins, uniting in the universal plea to respect an individual’s conscience. This line of thinking leads to believing that the only thing that protects a child from abortion is birth, (and sometimes not even that).
(And if you think that this is a minority view in the pro-choice world, you may be forgetting that President Obama holds this opinion.)

Pro-lifers rightly point out that if an individual’s conscience is the be all end all then infanticide is theoretically acceptable, as the cutting of an umbilical cord is an arbitrary place to draw the line to determine when human life is worth protecting.
Developing science and a growing awareness of the complexity of the issue has begun to move younger generations to demand that the pro-choice movement address head on the moral implications of abortion, instead of arguing women have a right to choose, period.
And there is evidence that the pro-choice movement has begun to listen, to craft their arguments in view of this growing awareness that abortion is a moral issue that demands more subtle dialogue.

Even Francis Kissling, the former president of Catholics for Choice, in an op-ed for the Washington Post last year argued that the pro-choice movement must begin to look at this issue with more nuance than they did in 1973:

We can no longer pretend the fetus is invisible … We must end the fiction that an abortion at 26 weeks is no different from one at six weeks. These are not compromises or mere strategic concessions, they are a necessary evolution. The positions we have taken up to now are inadequate for the questions of the 21st century.

This movement to look at abortion as a moral act is a sign of progress toward intellectual honesty in the abortion rights movement.

It is a sign of hope that we may finally begin to talk to each other.

What if Your Mother Aborted You?

Evidence that we have begun to talk to each other was plain in a recent article in which a woman addressed the pro-life question – “What if your mother had aborted you?”

This is question is lurking beneath the surface of pro-choice reasoning but most people like to hold it underwater, hoping it will lose the will to live.
Instead, the pro-choice mentality focuses on the people abortion willaffect, rather than the logical reality that their belief system put their own lives, and the lives of those they love, in danger of dying before their birth. (I explored the far reaching implications of this mentality in another blog post).

The recently published article that addresses this issue from the pro-choice point of view is shockingly entitled “I Wish My Mother Had Aborted Me.” In it, the author argues that in order for the pro-choice movement to regain traction, people must be willing to say that they should have been aborted:

“If we want to keep our reproductive rights, we must be willing to tell our stories, to be willing and able to say, “I love my life, but I wish my mother had aborted me.”

Although it makes me very sad to see someone think like this, it is also a relief to see the pro-choice movement bringing their logic to its tail end.

Some pro-choicers who have stuck with the “Life Begins When We Want it to Begin” line are starting to show signs they have begun to face the logical result of this kind of reasoning.
Recently, in the Journal of Medical Ethics, two Australian academics published a paper entitled “After birth abortion – why should the baby live?” In the paper, the academics nonchalantly discuss the logical question that results from the pro-choice mentality – if fetuses do not have the right to live, what makes us think infants have a right to life?
The authors argue that an infant is not a person, just as a fetus is not a person. In the mindset of the authors, personhood begins when an individual values their existence, when the loss of their life would be a conscious loss to that person. Hence, it is acceptable to kill a fetus, and hence it is acceptable to kill an infant.
Therefore, the authors argue that there is no logical reason why infanticide should not be permissible as well:

When circumstances occur after birth such that they would have justified abortion, what we call after-birth abortion should be permissible.

The authors even sound like they are promoting a Catholic worldview at one point, rightly pointing out that:

Indeed, many humans are not considered subjects of a right to life: spare embryos where research on embryo stem cells is permitted, fetuses where abortion is permitted, criminals where capital punishment is legal.

One wants to say, “Exactly! Which is why all of these things should not be permissible.” But the authors, seeing the facts, take the opposite road.

It is abhorrent, it is sickening, but at least it is intellectually honest. At least we can have a conversation on the same terms.

Peter Singer, a respected ethicist, who has argued in support of the logical end of the pro-choice mindset for a long time, but has been painted as a monster, puts it succinctly:

The fallacy in the anti-abortion argument lies in the shift from the scientifically accurate claim that the fetus is a living individual of the species Homo sapiens to the ethical claim that the fetus therefore has the same right to life as any other human being. Membership of the species Homo sapiens is not enough to confer a right to life on a being.

Now we’re getting somewhere.
Some of you may be horrified that I am cheering for these abhorrent views.
But I cheer for them in the same way I cheer for atheism. I appreciate the honest atheist; they have often thought about the most important questions in life and they have chosen sides. The wrong side in my opinion, but at least they are choosing sides.
In-betweens, vagaries, mushy “I don’t know so I’m not going to think about it” relativism is much more frightening to me than the kind of thinking that has common logical ground and can actually lead to some kind of dialogue that means something. As GK Chesterton said, “Art, like morality, consists in drawing the line somewhere.”

At least people are drawing a line somewhere.

Now, we just have to decide if this is where we want to draw the line and how. Do we want to draw lines that can continually be pushed further and further, depending on what the collective society determines to be the criteria for human life that deserves to be protected?
Or do we want to draw lines that cannot be moved, lines that demonstrate that truth is not mushy, that human life is precious and worth protecting, and that there is a common moral ground that is discoverable and worth holding on to?
Let’s start talking so we can start drawing.
Previous Post 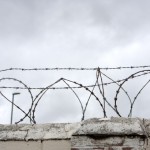 August 20, 2012
Family Research Council Shooting & the Ghettoization of the American Mind
Next Post

Fasting Friday: Thinking about Hell
Catholic and Enjoying It!
Related posts from Pursued by Truth