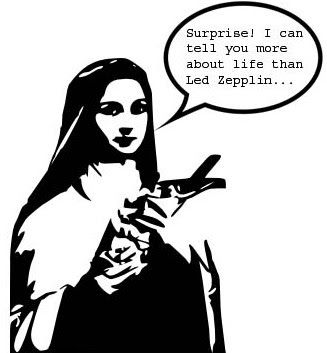 I spent the summer after 7th grade lounging around my neighborhood pool listening to a cassette tape of Led Zepplin’s greatest hits, reveling in my teenage angst.

My mother became rightly concerned about her daughter who just a couple years earlier would have chosen to serenely read Anne of Green Gables by the pool. Instead, I disdainfully discarded Anne and opted for Sylvia Plath’s The Bell Jar while listening to Stairway to Heavenover and over again.
Recently, I thought about those days as I read the passage from Genesis about Jacob’s Ladder (Genesis 28:10-19). In it, Jacob had a dream in which he saw a ladder and “God’s angels were going up and down on it.”

Traditionally, the ladder in Jacob’s dream has been said to symbolize many things. For Jews, it was often interpreted as symbolizing the prayers and sacrifices offered in Temple that served as a bridge between heaven and earth. Saint Irenaeus saw the ladder as a symbol of the Christian Church leading people to God. Many of the saints saw it as a symbol of the path of perfection. Others saw Jesus himself as the ladder; because Jesus is both fully God and fully man, his humanity serves as the connection between God and man.
However, I was surprised to see that my Bible translates “ladder” as “stairway.” I immediately consulted the footnote and discovered that the Hebrew word sulam, traditionally translated as “ladder,” is now thought to be more accurately translated as “stairway.” Many scholars believe that the staircase Jacob dreamed of was likely similar to the Babylonian ziggurats.
Whether the true translation is “staircase” or a “ladder,” the essential idea remains the same: It is through the life, death and resurrection of Jesus that we are able to climb the stairway to heaven.
In Led Zepplin’s song Stairway to Heaven, he sings about a woman who lives a superficial life focused on material things. The woman even thinks she can buy the stairway to heaven. The thing she does not realize is that the stairway is already free. Jesus is the stairway and he gives himself to us free of charge.

Unfortunately, neither the image of a stairway nor a ladder is appealing to me. I have a hard time climbing a few flights of stairs, let alone one that stretches to heaven. Even knowing that the stairway is Jesus, I still feel like the arduous journey is beyond my stair climbing skill set. Like a typical American, I find myself wondering if there are any more comfortable options – perhaps a heavenly escalator?
Then I remembered my dear patron saint who celebrates her feast day today. St. Therese, the delightful saint who, seeing the stairway of perfection, faints into the arms of Jesus and asks him to take her up in an elevator. She says:

In rich homes there are elevators that replace stairs to great advantage. I would also like to find an elevator to lift me up to Jesus, because I’m too little to climb the rough staircase of perfection. The elevator that must lift me up to heaven is Your arms, Jesus! For that I don’t need to become big. On the contrary, I have to stay little.

It’s no wonder this woman is a Doctor of the Church.

We spend our lives trying our hardest to puff ourselves up and pretend that we are bigger and better than we are. But the truth that we all know deep down inside is that we are little. There is always something in us that remains in touch with our smallness.

Rejoicing in our smallness is the beauty of the Little Way. St. Therese did not espouse some kind of backwards worm theology. She did not see our smallness and feel disdain or fear. Instead, recognizing her wretchedness, she feels joy. After all, our weakness gives us an excuse to leap into the arms of God and leave it all up to Him.
Don’t we all want this, deep down inside?
So, on this feast day of St. Therese, let’s ask for her intercession:
Forget stairways little T, we want the grace to accept a ticket on the heavenly elevator of God’s love.
Previous Post

October 8, 2012 When Fish Fall Down a Waterfall, Do They Die?
Recent Comments
0 | Leave a Comment
Browse Our Archives
Follow Us!

Fasting Friday: Thinking about Hell
Catholic and Enjoying It!
Related posts from Pursued by Truth