My post over at Aleteia this week is about grunge-rocker Kurt Cobain and our smiling Cardinal Dolan of New York.

Kurt Cobain, the unforgettable face of ’90s grunge rock, stood uncomfortably onstage with his hands by his side. He was dressed in a wrinkled black T-shirt and ripped jeans. His characteristic stringy, bleached-blond hair hung in his eyes. Just then a large jovial man came onstage. I recognized the current “smiling cardinal” of New York City.

“Wow, thanks for this, Sister. I loved his music although I am old enough to be his mom. At the time of his death, I was in my 25th year away from the Church. After his death, I started to question a lot of things — my lifestyle, for one, and wondering why I was keeping myself away from the Church…and so I returned in 1996. Eventually, my husband was baptized and our marriage convalidated in the Church. I always have credited Kurt with having a hand in my Prodigal return….Now I pray for the repose of his soul when I hear one of his songs on the radio.”

Kurt Cobain’s death led someone to come back to the Church, and now she prays for the repose of his soul.

God can use anything to lead us to him. 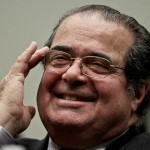 February 13, 2016
Justice Antonin Scalia and the Foolishness of Christianity
Next Post 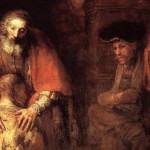 February 18, 2016 Praying for Prodigals: An Intercessory Prayer Retreat
Recent Comments
0 | Leave a Comment
"Jeanne d’Arc, Albert Lynch (1851-1912) , does anyone know who is the person that posed ..."
artisamazing 10 Most Gorgeous Paintings of Joan ..."
"My heart breaks for the Christians (and other minorities) in hte middle east. They will ..."
Manny NEW Syrian Archbishop’s Letter: Will We ..."
"This movie was painful to watch for more reasons than I'll enumerate here. Others like ..."
KH Sr. Helena Burns Reviews: War Room
"Anything's possible."
Truth Seeker What Are the Gifts of the ..."
Browse Our Archives
Related posts from Pursued by Truth