I am not now, nor have I ever been, a Christian.

Like many Pagans–like many Quakers–I have an intense Bible allergy.  That book has been used as a blunt instrument to bludgeon human beings out of their own consciences for far too long, and no member of my society has escaped their share of blows, I think.

However, unlike many Pagans, and unlike many Quakers, I have friends who have been able to share with me glimpses of another Bible, a different book, which actually has been a light for them as they’ve done some extraordinary and humane things.  Their Bible is not a blunt instrument, and is only ever understood in the “Spirit that sent it forth.”  I have learned that it can be worthwhile to challenge myself and my personal Bible allergy by listening to their Bible, when they speak from it, and even attempting to read in it myself, in that same Spirit.

“Begin with the prophets,” one of my friends replied.  And since she is a woman who is radiant with Spirit herself, and someone whose acts shine with kindness and courage, I occasionally take her advice, and wrestle with That Book.

Today, during my morning meditation, I was wrestling with Isaiah.

There are things that vex me about Isaiah.  I’m not too keen on the fact that Christians have reordered the books of the Bible, to place Isaiah in a different order specifically to suggest that his prophecy was primarily about predicting Jesus’s life.  (I hate that kind of crap.  Deception in religion makes me angry, even when it’s centuries old.)  And of course I’m none too keen on his stance against idolatry, as a proud idolator.  Though I’m also a pretty literate one, and one with a brain in reasonably good working order.  I’m not unaware that, based on context, it’s maybe more to the point to interpret Isaiah’s condemnation of those who worship “the work of their own hands” to be more about our human tendency to worship our material objects, from smart phones to fancy automobiles.  Isaiah was not too keen on those who treasure riches above compassion–that’s crystal clear.

And that’s where, as a Pagan, I find myself struggling. I read passages like this one, and I am powerfully moved:

Jerusalem, you are like an unfaithful wife. Once your judges were honest and your people lived right; now you are a city full of murderers. Your silver is fake, and your wine is watered down. Your leaders have rejected me to become friends of crooks; your rulers are looking for gifts and bribes. Widows and orphans never get a fair trial. (Isaiah 1:21–23) 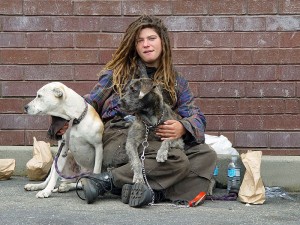 I read this passage, and I think, yeah.  This is the world that I live in.  I think about the ways my government has become practically an extension of the boards of large corporations.  I think of the ways my whole society seems to find wealth and the pursuit of wealth to be the only value that matters, and how utterly willing people of every income bracket (though especially the wealthiest, those with least need) are to cheat and steal in order to get ahead, and the corruption and apathy that lets us turn away from refugee children at our own borders, or even persecute them… that lets us treat homelessness as a crime and poverty as a sin… and the impossibility of the poor finding justice anywhere in my great, powerful, wealthy nation… and I recognize what Isaiah was shouting about.

Of course it is the case that the Christian majority in my country is adept at tuning out messages like Isaiah’s–as adept as the men and women of his own time, I’m sure.  And yes, there are individual Pagans speaking against the exploitation of the poor.  (T. Thorn Coyle and Alley Valkyrie come most quickly to mind, though I devoutly hope they are merely the most widely known of many, many Pagans who give a damn–and act like it–in our community.)

I also suspect that the reason there are not more Pagan myths and traditions decrying social injustice has something to do with the fact that most of the pre-Christian societies we look to for inspiration today had not achieved the vast economic gulfs between rich and poor that were entrenched in the Middle East by the time of the prophets.  I would not for a moment put forward the premise that the people of ancient Israel or contemporary Christendom are more compassionate or engaged on matters of social justice than Pagans are.

But the fact remains: as far as I can tell, we lack any real tradition of confronting social inequity.  Our myths are largely silent when it comes to justice for the poor.

And I am hungry for that justice.  I am angered that my people–not just Americans, but Pagans–turn a blind eye to the suffering of millions.  Out of apathy?  Self-interest?  Complacency?

I want a Pagan Isaiah.  I want us to know, to be absolutely and utterly convicted of the thought, that our gods hate our indifference to the poor.  That turning away refugees from violence is odious; that refusing the feed the hungry is selfish and ugly; that justifying it in the name of a spiritual libertarianism masking itself as religion is unacceptable.

Too many of us treat our religion as a great excuse to go out an party in the woods, but act as though no one–including our gods–has the right to make any demands on us whatsoever.  This is a lie.

I long for a Pagan Isaiah to let us no in no uncertain terms what we deserve for telling ourselves such comfortable lies in the face of the suffering of others.

I am not now, and I have never been a Christian.  But if ever I become one, it will be because I have despaired of our Pagan ability to feel ordinary empathy for those who are in need.  I want a Pagan social gospel.  I want a Pagan ethic of compassion for all beings.