Theism, or Down to the Sea (Of Limitless Light)

Sometimes, when I talk about my experiences in Quaker meeting, I throw around the word “God.”

I do this not because I’m a monotheist or a Christian, but because I’m pretty sure the experiences of those who use that word in my Quaker meeting are consistent with my experiences in that context, and it was coming to feel precious–like a constant need to remind people of my specialness, my difference–never to use that commonly understood word when I discuss those shared experiences.

But then again… it doesn’t quite fit.

Sometimes I use the vague, generic word “Spirit.”  I use it as a collective noun, meaning something like, “Ground of All Being,” or, as I once put it in worship, “Big Fuzzy Warm Thing that Loves Us and Wants Us to Be Glad.”

But then again… it doesn’t quite fit.

I’ve sometimes thought about trying out other terms: “Elohim,” for instance, that curious plural noun for the supposedly singular God of Israel, or “Great Spirit,” which does convey at least a little of the sense of a spiritual presence in the world, woven through the world. But the one term implies a relationship to the Bible I don’t have, and the other reeks of cultural appropriation.

In the end, all of the words just… don’t quite fit.

Nor do names, in talking about the Pagan gods, when I talk about my life as a Pagan.  All of it is subject to a false clarity, to distorting the direct light of spiritual encounter with a lens of human cognition.

I know there are Pagan polytheists out there who have the same clear, concrete sense of the boundaries of the named deities they worship that they might of the differences between one mineral and another.  It’s as if they’ve taken measurements somehow, and proved to their satisfaction that Thor has a different specific gravity than does Thunor, never mind Ares and Mars.  Some Pagans are so clear and so definite about the identities and natures of the beings they worship.

But I am often left wondering about names entirely.  (Who was that masked spiritual being? Cue my personal spiritual theme music.) And was that Being I was just listening to a god?  A nature spirit?  An aspect of my own deepest self?

I’ve never been terribly sure we know what we mean by the word “god,” when you get right down to it.  What is a god, and how are gods distinct from nymphs, ghosts, ancestors, or spirits of place?  Where is the litmus paper that can let me measure these gradations of meaning?

Maybe somebody out there has that kind of clarity.  They can speak with some authority about these things.  I can’t: When it comes to naming that spiritual experience, all I’ve got are the shifting sands of second-hand information and intellectual speculation. For myself, I’ve never seen a point in piecing together a purely intellectual theology for an experience as visceral, as immediate, as spiritual communion.  I’ve never found a set of names that didn’t invite more argument than it settled, didn’t diminish more than it expressed what I encounter in worship.

While the disadvantages of this are obvious–I’m left without a language I can rely on–there are advantages, too.  I find that I can hear and feel affinity for the language of polytheists and non-theists, animists and monotheists, whenever their words describe an experience I have personally had.  I catch echoes of my own truths in the truths of others. And then I try to bounce words of my own back, to clothe my observations in language, not to define anyone else’s religious life, but as a sort of spiritual sonar: words bouncing in the dark to help others, whose experiences echo mine, to also pick out those dim, underwater shapes of lived encounters with…

…something for which there are no words.

What kinds of experiences am I trying to describe?

Most of all, I am seeking words for those warm senses of presence, of Others, I have had at various times of my life.  Sometimes, those encounters have been comforting; sometimes challenging.  I have felt spiritual Presences within the boundaries of a cast circle, in the waters of a stream flowing through a dark wood, in certain trees, and within whole forests.

I have also felt another sort of Presence–not a person or like a person, and yet intensely personal. Sometimes my experience of that Presence comes in the company of certain people.  Being with them, embracing them, makes me aware of That Other Being as well.  It is like heat from a hearth, that thing that is coming through those people, a tenderness that is not only human, and not only about that one moment and that one relationship.

At other times, that tender Presence seems to fill all the world.  It’s vast, breathtaking, closer than my own skin and more personal than my own name. This is the experience I mean when I use the word “God.” Or better, in an echo of the Kabbalah, let me name it the “Sea of Limitless Light.”

That Spirit that is like the experience of water, and of light.  I float in it; at times I am flooded by it; I am gently illuminated by it some times, and others, I am nearly blinded by it. My whole relationship with That Spirit is very much like a relationship with the sea.  Large beyond my reckoning, with depths that are far beyond me.  Overwhelming–but also centering.

Have you ever gone down to the ocean, on a break from your busy life?  You get out of your car and leave the human world behind you.  When you step out onto the sand and feel the salt breeze, there’s a feeling of stepping outside time.  How much older is the sea than our short history?  How much more powerful than all our words and theories?

Seagulls’ wild music washes over you… and then the soft, eternal, repeating breaths of the sea, the sound of waves curling over the shore. Those moments, when you feel the “too much with us,” the “getting and spending” of life dissolve into the experience of simply being with the ocean… those moments are what I mean.

Is that “God”? Is there one Water, one Ocean?  Should I even care? 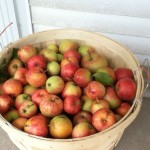 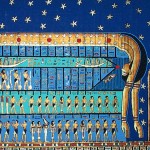