Amidst the tragic situation in Palestine these days, a few Muslims seem to have found a way to express their anger and frustration. No, not by constructively doing anything about it, but by bashing Jews and hailing Hitler as a hero! Wrongly equating the actions of the Israeli government with Judaism, they continue generalizing approximately 15 million Jews, painting them all with the same brush!

A few days earlier, as I was browsing through my Facebook news feed, I came across this meme praising Hitler for killing Jews, with the hash tag #Hitlerwasright: 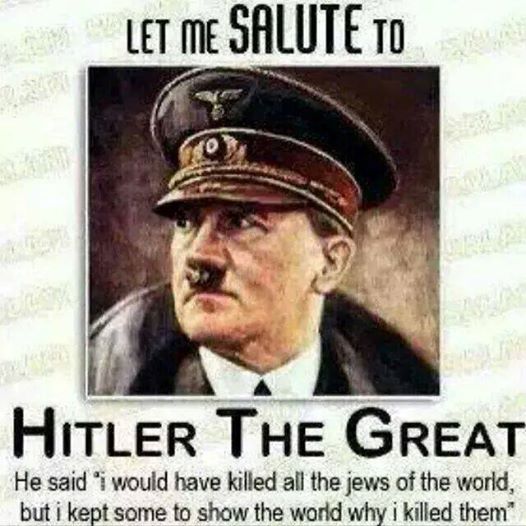 Exasperated as I was, I tried to maintain my composure and very calm-fully responded to this individual that there are many Jews who condemn the actions of the Israeli government, much like us Muslims who condemn the actions of Jihadist terrorist groups, and so it is naïve to generalize all Jews based on the situation in Palestine. Without taking a minute, he responded back to me quoting the Quranic verse that “asks Muslims not to be friends with Jews”, justifying his bigotry through the Quran!

A common misconception about the Quran is that it promotes hatred of Jews and Christians, and asks Muslims to not be friends with them. Strangely, instead of voicing out against such a misrepresentation of 5:51 (which contains the commandment), some Muslims actually revel in quoting this verse as a means of feeling superior, perhaps. Who needs enemies, when you have such believers? But I guess, that’s the karma of blindly following religious figures.

Here’s the much quoted verse:

O You who have believed! Do not take the Jews and Christians as your allies (Auliya). They are allies of one another. He among you who takes them for allies is one of them. God does not guide the oppressive folks. Quran, 5:51

A plethora of lies are sold to the average Muslim to instigate enmity with other faiths, and so I will debunk these points step by step. Point 1 and 2 will explain how the verse above is misrepresented, and 3-6 would expand on further points.

1. Aulia is erroneously and inconsistently translated as friends by some translators. However, in Arabic, Aulia is more closely defined as a protector or an ally. It has been used in the Quran to mostly signify that God protects (Wali) the believers through revelation. This is not to be confused with Khaleel, which does mean friend, but is an honor given exclusively to Ibrahim (4:125).

Keeping the context in mind, it is clear that the verse refers to political allies, and is not about friendship.

2. The verse, quite specifically, asks Muslims not to take Al-Yahood & Al-Nasaraa as an ally. Now, “Al” in Arabic denotes an address to something or someone specific. If we are to assume that God asks us not to ally with any Jew or Christian, then on the same wavelength, we have to assume that all Arabs are the worst in hypocrisy and disbelief! Yes, it’s a verse in the Quran!

The Arabs (Al-Arab) are worst in disbelief and hypocrisy, and more likely to ignore the Limits that God has revealed to His messenger. God is Knower, Wise. Quran, 9:97

Except, here the “scholars” would be quick to contextualize things, or else their model of praising Arabs as the “chosen” people and equating Arabic culture with Islam would fall flat on its face! It is an inconsistency in approach, and consistency is the only criteria to judge truthfulness.

Taking a consistent view, both verses inform us that *some* Arabs (Al-Arab) are worst in hypocrisy and disbelief, and that Muslims should not ally with *some* Jews and Christians (Al-Yahood & Al-Nasaraa). Quite obviously, it is addressing the Jews and Christians at the time of the Prophet, who continuously broke their oaths, stoking the fires of war against Muslims (5:64) and were thus their worst enemies (5:82).

Common sense would suggest that allying with the enemy would be a sure way to lose the war.

3. The Quran constantly reminds Muslims not to generalize Jews, Christians, and others; but to judge them by their actions:

They are not all the same; among the People of the Scripture is a community standing [in obedience], reflecting and reciting the signs of God during periods of the night and they submit.

They believe in God and the Last Day; they enjoin what is right, and forbid what is wrong; and they hasten (in emulation) in (all) good works: These are the reformists! Quran 3:113-114

God does not forbid you from being kind, and fully equitable to those who do not fight you on account of Religion, and do not evict you from your homelands. God loves those who lead a just, balanced life.

But God does forbid you regarding those who fought you because of your system, and drove you out of your homes, and helped to drive you out. You shall not ally with them. Those who ally with them, then such are the transgressors. Quran, 60:8-9

4. Even traditional Islam allows Muslims to marry Jews and Christians. Is friendship a more sacred bond than marriage? Then how on earth can the Quran discourage us from befriending them?

5. Contrary to popular belief, Muslims do not have a monopoly on salvation. In fact, Jews and Christians, much like any other faith, are promised paradise should they “submit to God, do acts of reformation, and expect accountability” (2:62 & 5:69). The very act of claiming sole monopoly on truth and salvation is actually shunned by the Quran, of which, ironically, some Muslims are guilty:

And they claim, “None will enter Paradise unless he is a Jew or a Christian.” This is nothing but their wishful thinking. Say, “Bring your proof if you are truthful.”

Nay, whoever submits his whole being to God, and he is a doer of good to humanity, his reward is with his Lord. Then, no fear shall come upon them nor shall they grieve. Quran, 2:111-112

6. The idea of alienating a group of people because of their faith alone is in fact contrary to the Quran, which actually promotes peaceful co-existence among citizens of varying backgrounds:

O mankind, indeed We have created you from male and female and made you peoples and tribes so that you may know one another. Indeed, the most noble of you in the sight of Allah is the one who is deeply conscious of Him. Indeed, Allah is Knowing and Acquainted. Quran, 49:13

If anything, Muslims should be the last to generalize people of other faiths. They are vocal on how every Muslim shouldn’t be stereotyped as a terrorist because of the actions of a few terrorist groups seeming to represent “Islam”, yet generalize and put all Jews in one box because of the actions of the Israeli government and the “super rich bankers that control the world.” I condemn fundamentalist Zionists, just how I condemn fundamentalist Islamists. However, I don’t buy the propaganda on both sides of badmouthing every Jew or Muslim because of the extremist actions of some.

Is it not an act of gross hypocrisy of claiming to be misrepresented, but misrepresenting others at the very same time? But perhaps, it is not hypocrisy. Perhaps, it is just a lack of introspection. A trait so many of us ignorantly possess.

And please share it on your social networks to spread awareness!

July 22, 2014 What If Some Religious Figures Came Out With Islamic Handphones?
Recent Comments
3 Comments | Leave a Comment
Browse Our Archives
get the latest from
Muslim
Sign up for our newsletter
POPULAR AT PATHEOS Muslim
1

Muslim
Merry Christmas - Its Fine, You Can Say...
Quranalyze It