The Perfectly Imperfect Mother of God

Earlier today, I asked my children (ages 15, 13, 10, 7, and 5) what they thought Mary was really like. What follows is their conversation. My comments are in blue, the rest are them.

“So, what do you think she was really like? Not the statues, but the real person?”

“I think she was beautiful, peaceful, and quiet like the pictures.”

“What? No way. I think she had ugly feet like in the picture over the mantel.” 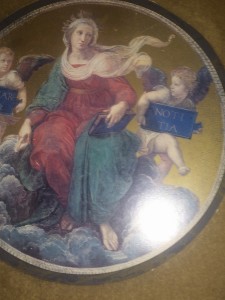 “It has ugly feet? Why would she have ugly feet?”

“Duh. Because people walked everywhere back then. In sandals. Sandals don’t protect your feet. Trust me. They were ugly.”

“She was beautiful! She had blue eyes and long yellow hair…”

“No. Don’t you remember the propaganda stuff from Germany? Brown hair, brown eyes, big noses… I’m sure they exaggerated the nose part.”

“Mom? Do Jews have big noses?”

“Some do. Some don’t. They’re like everyone else. There’s variety. Why don’t you Google ‘Middle Eastern Jews’?”

“Why do people paint her white if she was brown-ish with brown hair and eyes?”

“Wait? Does that mean that Jesus was brown-ish too?”

“Yeah. He got all of His human DNA from his mom. If she was brown-ish then so was He.”

“I like brown eyes. Especially the brown kind that gets crinkly at the sides when you smile. I’m pretty sure that Mary had the crinkle kind.”

“I think she had a good laugh. Not the mom kind of laugh, but the loud-ish and funny kind that makes you laugh. The kind of laugh that’s funnier than the joke.”

“So you think she was funny?”

“Definitely funny.” There were unanimous head-nods at this.

“God likes joyful. He would never give his Son to someone who wasn’t funny.”

“Remember the way that Elizabeth ran out to meet her, all excited? You don’t run out the hug someone who’s not fun to be around. You watch them from the window and sigh.”

“I think her teeth were crooked, at least a gap or overlap. No braces mean wonky teeth.”

“So what if they were crooked? She still had a good smile!”

“Seriously? Jesus had a crying mom? That’s the worst kind of mom. No offense, Mom.”

“Hormones happen to everyone. Mother of God or not.”

“I don’t like this game. Ugly feet and acne are not a person you make statues of.”

“Sure they are. You just leave out the ugly parts. It’s like Photoshop or filters.”

“Other than acne and crooked teeth. What was she like?”

“This angel stands in front of her and says God sent him and she says ‘Why would God send you to me?’ She doesn’t even offer him water or a place to sit down. Hospitality was a big thing back then. She ignored all of that, and told him to explain himself. That’s sass.”

“And she bossed God around. He was her kid, but she knew he was God and she still had to tell him to clean his room and stuff. You can’t be totally meek and mild, and still be bossing Jesus to do his chores.”

“And she didn’t care what people thought. Not in that snap-your-fingers way, but in the I-Know-I’m-Right way.”

“If she cared for what people thought, she’d have never agreed to be Jesus’s mom. They could have stoned her, but she didn’t even care. She just said yes.”

“She had a crinkly-eyed smile.”

“Probably not what we would call pretty.”

“But not scared of anything, and kind of sassy…”

December 20, 2014 Gone Viral
Recent Comments
0 | Leave a Comment
Browse Our Archives
get the latest from
Catholic
Sign up for our newsletter
POPULAR AT PATHEOS Catholic
1

From Founding a Startup to Deloitte...
Through Catholic Lenses
Related posts from Shoved to Them