Homeschool Family Sued By Neighbors For Letting Kids Play Outside

Friends of ours are being sued for allowing their children to play outside. 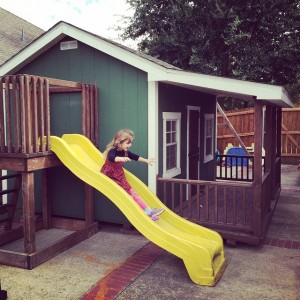 The Counts family built this playhouse on their side patio after receiving permission from the HOA. The neighbors went to the HOA meeting and complained that it blocked the view for them and their dogs. (Available in the HOA meeting minutes.) Mrs Counts went outside and looked and realized that the only view it blocked was from the neighbors’ bedroom into her living room, and wrote to the HOA who granted her a variance that the play structure could stay.

So the neighbors called the zoning board to “anonymously” report that the playhouse was too close to the Counts’ residence. The inspector came and measured and told them that the porch roof was inches too close to their house and would have to be removed. 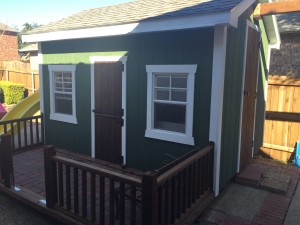 With the now porch-less play house passing inspection, the neighbors began retaliating in a new way – they blared music out the windows whenever the children played outside. Their weapon of choice was gansta rap with the lewdest lyrics they could find at a volume loud enough for the police officer who was called to report that he could hear it three houses further down. The moment their children went out to play in the back yard, not just on the play house, the music started and their mother brought them inside. It went on for weeks. Mrs C tried to talk to the neighbors, but the door was slammed in her face or wasn’t opened at all.

And now the lawsuit.

Having run out of options through the HOA and the zoning board, and after being warned by the police to cease and desist with the musical warfare, the neighbors have turned to the courts.

In a filing which is now public record, the neighbors Mr and Mrs Ward, are suing their neighbors because of the “loud and obnoxious noise and commotion caused by the children playing,” which they say has “unreasonably interfered with the Wards use and enjoyment of their property, which has harmed the Wards and caused damages to their property rights.” The suit goes on to state that Mrs Counts is known to homeschool her children, and so her children are outside playing “on the play structure several times each day during weekdays (when most children are in regular schools) and constantly on weekends, weather permitting.” (Ward v. Counts filed in Collin County, TX)

This whole saga has had me thinking and rethinking about our behavior as homeschoolers and parents, and how they affect the people who live near us. When I started homeschooling 14 years ago, the conventional wisdom was to not let your children play outside in the front yard during school hours or nosy and “helpful” neighbors might call CPS or the truant officer on your family. (It happens.) We kept our children out of the way of the general public and hoped to be left alone. We put up swing sets and play houses and spent recess safely in our own back yards.

That’s why homeschoolers, and all parents really, should be paying attention to this particular case. It may have begun with a play house, but it has become so much more. By including the information that Mrs Counts homeschools her children, this case has become about our rights too. Do our children have the right to play outside during school hours? Do our neighbors have a reasonable expectation to not have to hear the sounds of children at play during the time when “most children are in regular schools”?

Imagine the precedent that a victory in this case could set for overbearing neighbors everywhere. If the Wards prevail, will the courts have handed those who are against home-based education an effective new way to attack our families and our way of life? What will become of homeschooling families if the court agrees to this? Will it mean the death of recess and play time for homeschooled children and those who are too young to attend a traditional school? (Two of the four Counts children are below school age.) Have we really reached the point as a society where the natural sounds of playing children is a recognized legally actionable nuisance? What does that say about our future?

January 24, 2016 Standing At The Cross Roads
Recent Comments
0 | Leave a Comment
"cheap ModafinilExcellent information, so thanks for putting out top notch content all the time"
Onlinesmartdrug A Pro-Lifer’s Experience With RU-486
"I'm sure you could write a similar story about a soldier in the German Army ..."
Donalbain The Civil War: Beyond Slavery and ..."
"I don't totally get it either but I know one thing....she obviously did something right. ..."
blueslady I Just Don’t Get St Therese
"I am very interested in your story for the sake of spreading good news,about the ..."
Tracy Erwin A Letter to My Daughter – ..."
Browse Our Archives
Related posts from Shoved to Them