When Ben-Hur opens on August 19, moviegoers will see not only a new version of a beloved classic, but also a unique kind of summer action movie, one with a powerful message of forgiveness and laying down arms.

The film, written Keith Clarke and John Ridley based on the classic Ben-Hur: A Tale of the Christ, is the most recent update of the story, which includes the well-known 1959 version starring Charlton Heston. During a press event last month, we had a chance to speak with director Timur Bekmambetov (Wanted, Abraham Lincoln: Vampire Hunter) and star Jack Huston (Boardwalk Empire) about the filming of the epic motion picture and the themes surrounding it.

Timur, how did you get involved in the project?

Timur Bekmambetov—It was a long time ago. Sean Daniel, producer of the movie, he called me and asked if I wanted to remake the Ben-Hur movie, another adaptation of the book. I said no, and then he said please read the script. He sent me the script written by John Ridley, one of the best writers in this town today.

Was there any trepidation on taking on the project of such a revered project?

Jack Huston: The way I say it, I say it’s like I take the book almost a reference of like as a landscape, if you’re looking at landscape. If you ask four painters to paint that same landscape, you’ll get four very different paintings. But it’s the same landscape. So the book in a sense is a template, it’s like the landscape and in a sense Timur and William Wyler I guess were the painters constructing something. That’s the greatest thing about art, it’s what’s interpretive. Anyone can take anything they want from it. It’s almost what I put as a piece of theater. It’s like saying if one person does Shakespeare, does that mean that no one else should ever stand up and say those lines? Same thing. It’s beautiful when people go and reinterpret it. Kenneth Branagh’s doing like his seventh production of Romeo and Juliet right now, as we speak, and he’s done it a bunch of times. And you might say, “But you’ve done it before.” And he might say, “Yeah, but I can always be doing more and changing it and figuring out new things.” So that’s the way I looked at it.

Timur: Yes, for me, the 1959, unbelievable best movie with best action scene ever made, the chariot race. But at the same time, it’s out-dated. Not technically, it’s outdated ideologically, because the idea of forgiveness. What we have in this movie is unique. I don’t know another movie, Hollywood movie, because there’s a lot of European movies about how we can forgive each other. In America, it was not so popular. Because during post-production, I felt it, because at the end of the chariot race, it’s the end of the movie for big wide audiences. Usually, the movie is finished at this point. What’s great about this story is that it’s only really the beginning of the real drama. When you won the race, when you destroy your enemy, you destroy your brother, your family, your life, and your world, he’s absolutely empty. Then there’s a whole process of discovering something real, how to survive and it’s forgiveness. It’s the whole reason to make this movie. It’s not about technicality. One of the ideas we had from the beginning, the whole team, all of us, DOP, director, we’re just trying to stay behind the story and let the story play itself. For very specifically, we shot the style of camera work, it’s very realistic and there’s no perfectly designed shots, because otherwise it would take away from the story and from acting.

It felt like an updated take and very modern. It didn’t feel very stylized. Actually our favorite sequence was the slave ship. What was it like working on that scene?

Jack: Yeah, because you’re in like an enclosed space. That was all Timur. As you know, from Judah’s point of view, it’s like “I don’t want you to think about what’s going on outside.” It’s much more spooky when you’re in a room and there’s things going on around you and you can’t see, you’re just getting little glimpses of things or looking out the crack over here, but you’re immovable, you’re with chains. There’s that great line, “If the ship sinks, you go with it.”

What about the filming of that?

Timur: The trick is we treat it not as an action scene but as a scary movie scene. Because he’s a slave, it’s not about the battle. He doesn’t care about the battle, his character. He just wants to survive so he can go back and kill, revenge.

Talk about the chariot and horse riding.

Jack: I’ve ridden all my life so I was very comfortable and happy with horses. That was lovely. The riding was all nice. The chariot was a different kind of thing but amazing. When else in life do you get to do these things? Surprisingly, we worked really hard on the film, but I really enjoyed making the film. It wasn’t one of those films that was like ‘oh, – I look back on it and think of it as one of the great experiences of my life. You go to work and enjoy every day at work, which was sort of special.

Timur: And it was a very collaborative process. I really appreciate what Jack did because we were together and it was a process of discovering things together.

Timur: He’s so professional, so good as a man, as a person. To work with him, you feel different.

Jack: Even being surrounded by so many great people. We all had such really good relationships, I feel like, making the film. Like Timur said, it was a beautiful collaboration and it was a very free space to create, if that makes sense. I felt the easiest part was the filming of this movie. When you think about films, I’m making a little movie now and it’s like every day something goes wrong, a little Indian movie, then you think about this movie, it’s surprising because it should have been really hard, I don’t mean that it wasn’t hard, it was incredibly taxing on the body, the mind and the soul.

Timur: We were lucky.

Jack: We were really lucky.

Timur: With the 32 horses on track running at the same time for 40 days and there’s no accidents, somebody helped us.

It sounds like you had the blessing of God.

Timur: We feel that everything was organic. It was happening itself. We were not fighting with a lot of…

Jack: It felt like there was amazing energy on set at all times and I really do feel…However anyone wants to look at it is great. That’s the great thing about it, I feel like. It was seamless in that sort of sense and it was a beautiful creative space in that sense. I was consistently surprised about the work and about the writing and when we were doing certain scenes. Emotionally, it was incredibly emotional.

Timur: One day was really tough, when we shot crucifixion. It was scary. You cannot imagine being director of the crucifixion, that you should say what to do. It was really uncomfortable feeling…

Jack: That was the day. There was something about those days. When I say the emotion, this is why about the film that it’s for everybody, those with faith, those without faith, whatever they do. I really honestly believe that. Because there were people up on that hill. This is a story, no matter who you are, you’ve heard, you know about it, and it was amazing how affected everyone was. Watching those actors as well up there. Rodrigo, I mean it was freezing cold. We have a wind machine with the rain and they were up there. It was that kind of thing where you watch people go above and beyond. They stayed up there and they didn’t want to come down. You worried about them getting hypothermia. They would sit up there and do these lines. That was the most brutal – I mean when you think about the slave ship, I would say that was the most brutal of all the days.

We noticed that Esther has a more prominent role in this movie.

Timur: It’s a part of Judah’s journey, because it was a way how we can bring the religious aspect as a part of his journey.

Timur: Yes, a bridge. She presents faith for Judah because he loved her.

Jack: She (Nazanin Boniadi) did great, so good. I loved it when Jesus says “Judah” at the end. That was a great piece. He didn’t say it initially and then he says “Don’t, Judah.” It’s like suddenly he knows. I thought that was a great bit you put in there.

And carrying the rock at the end.

Jack: That happened on set! That completely happened organically on set! It wasn’t in the script. I held this rock and I said “I don’t want to let go of this rock” and Timur said “Don’t let go of it.” We did a whole scene where I wouldn’t let go and then he goes, “you should let go of it.” That was Timur when he said, “Let go of the rock there.” That’s what I mean about the movie, that you find certain things. That rock was symbolic of all the things he carries. It’s amazing what he feels when he releases that.

Jack: And if we’re able to do that, if everyone could get a healthy dose of forgiveness in their hearts, that would be worth something. 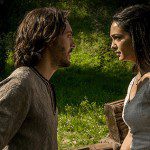 July 27, 2016 Expanding Esther's Role: Ben-Hur's Love Interest Highlighted In New Version
Recent Comments
0 | Leave a Comment
"Oh yes, I'd look forward to a reboot of the show! I watch it religiously ..."
David Rofulowitz What about a ‘Touched by an ..."
"Loved watching this show!"
Denise The Soul of Gospel Music Explored ..."
"OMG! A Touched by an Angel reboot would be amazing! Loretta Devine would be a ..."
Carmalita Smith What about a ‘Touched by an ..."
"You know in the old days, they use to accuse young girls who 'see things' ..."
Dimitri First Look: Mira Sorvino, Peter Coyote, ..."
Browse Our Archives
Related posts from Reel Faith