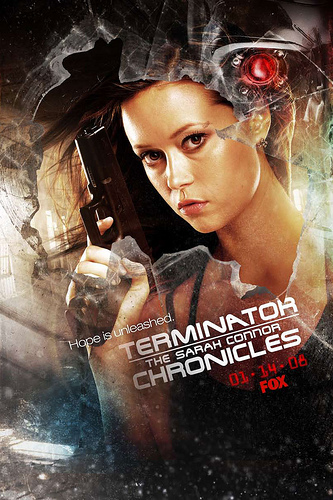 Sojourners magazine has two pieces highlighting works of science fiction that explore religious themes: “This World and the Next” and “Spiritually-Inflected Science Fiction“. In addition, Paul Levinson has his latest post up about Terminator: The Sarah Connor Chronicles. I love the way the show is exploring the parallels between programming an artificial intelligence and raising a child. A terminator from the future seems to be trying to develop its own Skynet, presumably before the original one can be developed. I think what is going on is that there are AIs in the future that want peace with humans, and they want to alter the past (our present) in order to give the first genuine artificial intelligence a better upbringing, so that it won’t decide to destroy humanity. And so they’ve enlisted the help of a child psychologist! What a great show!

October 23, 2008
Keith Ward, Big Questions in Science and Religion 7: Is Science the Only Sure Path to Truth?
Next Post

October 24, 2008 Around the Blogosphere
Recent Comments
2 Comments | Leave a Comment
"I did wonder about the possible consequences of the sudden introduction of massive rainfall on ..."
Sue Burnam Entering Strange New Worlds of Star ..."
"Alas, over here in the UK we haven't been able to see Strange New Worlds ..."
Scurra Entering Strange New Worlds of Star ..."
"Yeah - I think the important distinction is that places that are using "fakes" to ..."
Scurra Prehistoric Planet
"Thanks so much! While I'm not sure how many of the additional things that I ..."
James F. McGrath The Parables of LaGuardia Airport, the ..."
Browse Our Archives
Related posts from Religion Prof: The Blog of James F. McGrath