A Stark Choice Between Universalism and Hellism?

I think this picture, which Arni Zachariassen shared, is supposed to illustrate the difficulty of choosing between universalism and the sort of particularism that believes that anyone who is not a Christian (however that is defined) goes to hell. 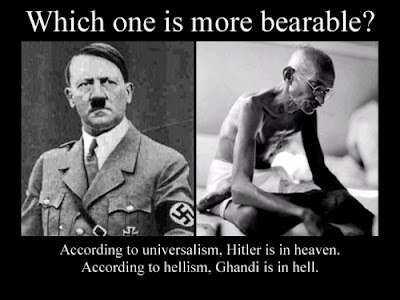 I wonder whether the unattractiveness of both options ought not to provide encouragement to explore other options, such as annihilationism. Surely ceasing to exist would be better than either spending eternity with Hitler, or eternity knowing that people like Gandhi are in hell.

But it is hard to embrace our own mortality – apparently so much so that it drives some people to Intelligent Design! 🙂

April 3, 2011
Choose Your Own Adventure Carnival Next Month, Courtesy of Dr. Jim!
Next Post

April 3, 2011 Earl Doherty Believes Paul Existed...For Much the Same Reasons Historians Believe Jesus Existed
Recent Comments
22 Comments | Leave a Comment
"hey mr dr lost fan. one of your video is not available anymore, either remove ..."
irshad Is Google Smarter Than Your Pet?
"see? some church padres forgot this like the one who said to donate to his ..."
irshad A Reminder: Jesus Didn’t Say “Bully ..."
"so checked eutychus blog and obviously this patheos.com but all i got is that original ..."
irshad Fork Criticism: Understanding Biblical Criticism Through ..."
"considering james f. mcgrath wrote some fiction stories how is he gonna judge all the ..."
irshad The Root of All Evil?
Browse Our Archives
get the latest updates from
Religion Prof: The Blog of James F. McGrath
and the Patheos
Progressive Christian
Channel
Books by This Author Books by James F. McGrath