Creationism and Bad Science Education around the Blogosphere

P. Z. Myers shared the excellent cartoon below (Jim Getz also mentions it) as well as information about a secret Intelligent Design conference. 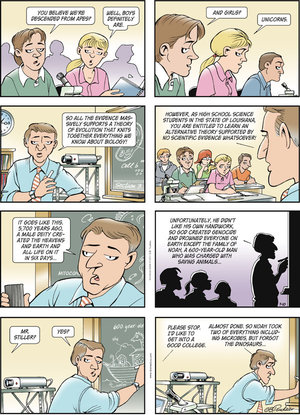 P. Z. Myers also has a post at The Panda’s Thumb explaining a recent article in Nature and another on a study that uses young-earth creationism’s own dubious methods to demonstrate evolution.

Dennis Vennema has posted part 6 of his series on evolution and the origin of biological information.

John Pieret discusses the latest Discovery Institute attempt to claim ID is scientific, while Ted Herrlich tries to help them with basic math.

Jesus Creed highlights the movie Leap of Truth, as does the BioLogos blog.

Debunking Creationism links to an evaluation of a running egg-laying crocoduck video:

While Open Parachute talks about Galileo’s modern critics, Jimpithecus has a post on the growing popularity of geocentrism as a fringe viewpoint among Catholics (see further the article he links to in the Chicago Tribune). Jim also discussed P. Z. Myers’ response to Ken Ham’s famous response to all scientific claims about the past: “Were you there?” I think that everyone should answer Ham’s claims in the same way:

“God created the world in 6 days.”

“How do you know? Were you there?”

“How do you know God said these things? Were you there?”

“No, but Jesus accepted Genesis as the work of Moses and inspired by God.”

“How do you know? Were you there when Jesus supposedly said these things?”

“No, but his followers recorded what he said, and they were eyewitnesses.”

“How do you know who wrote the Gospels? Were you there?”

And so on until Ham ceases from his seemingly unrelenting inanity.

Jerry Coyne proposes a scientific test of the story of Noah’s flood. David Bailey offers computer-produced text snippets as examples of the ability of the combination of rule and randomness to produce complexity.

CNN’s Belief Blog surveys the history of prayer in (and about) space, and offers a view of spaceflight as a spiritual experience.

Also of interest are physics data suggesting the universe isn’t a hologram, and work on an atheist-Christian Turing test.

July 10, 2011
Bob Cargill on the Council on Biblical Manhood and Womanhood
Next Post

Faith in a Time of Pandemic - Home...
XXV. HOMESCHOOLING (4/8) “And Jesus grew in wisdom and stature and favor...
view all Progressive Christian blogs
What Are Your Thoughts?leave a comment
Copyright 2008-2020, Patheos. All rights reserved.