Reasons to Buy Religion and Science Fiction: You Want To Believe

Fox Mulder on the X-Files had a poster of a UFO in his office, with the words “I Want To Believe.” The poster became famous. But why is it such a popular image? And what is the relationship between that sort of belief and religious belief?

Many staple fringe ideas of our time – some of which are regularly featured in science fiction, such as belief in alien abductions and crashed flying saucers at Roswell –  have many parallels and similarities to religious beliefs. More than the content, the shape of such beliefs and the will required to believe them has similarities that are worth exploring. Noticing how gods and cosmologies supplant one another, but our attitude to them persists across time, can tell us something important about how we as human beings make sense of our existence and our place in the universe.

Here’s something that you will want to believe: Religion and Science Fiction will continue to be available at a significant discount until the end of this month. If you want to order the book at 40% off, then click through to see the coupon code I shared earlier this month.

Elsewhere in the blogosphere on the topic of religion and science fiction, The Lead linked to a piece by Julie Clawson on how sci-fi has picked up the prophetic role once associated with religion. And IO9 shared some recasting of comic book covers in stained glass, some of which are presumably at least slightly blasphemous. But the book Religion and Science Fiction has a whole chapter dedicated to comic books and some of the deities that inhabit those graphic universes.

August 21, 2011 Continuing Conversation with Craig Evans about Secret Mark
Recent Comments
8 Comments | Leave a Comment
Browse Our Archives
get the latest from
Religion Prof: The Blog of James F. McGrath
Sign up for our newsletter
POPULAR AT PATHEOS Progressive Christian
1 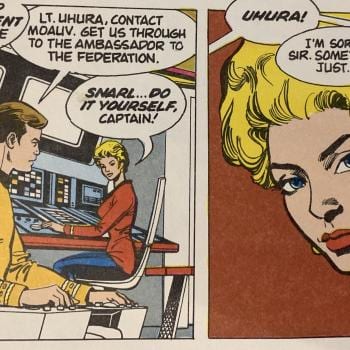