This image has been circulating on Reddit and elsewhere: 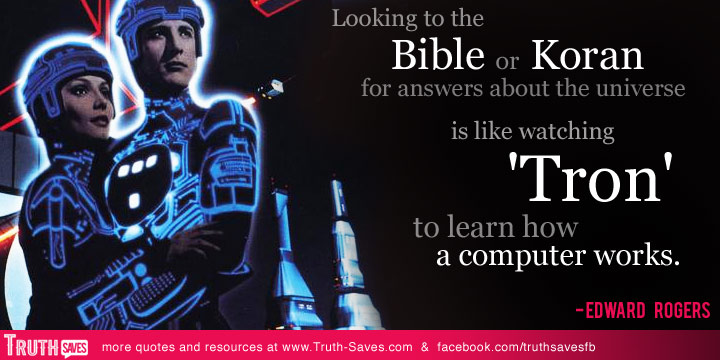 I think it is an interesting comparison to think about – as one who has blogged on more than one occasion about the relationship between religion and both the original Tron movie and the sequel Tron: Legacy.

On the one hand, it certainly is mistaken to think that Tron depicts what goes on in computers, or that the Bible or the Qur’an gives scientific and historical information, other than in a highly pictorial, metaphorical, symbolic manner, if at all.

But it would be wrong, because of this, to conclude that people have not found Tron, or the Bible, or the Qur’an, to be useful texts to interact with when reflecting on bigger questions than the technical question of how computers work or other matters of science or engineering. No computer scientist would use the Tron movies as a textbook for constructing, programming, or using computers. But they might usefully make reference to it in asking philosophical questions about the nature of software, artificial intelligence, and other such matters.

Once again, I am reminded that there are both religionists and critics of religion who mistake the genre of sacred texts, and in the process seem to end up failing to do justice to the way even movies can be useful and important without being literally true. If one takes them as things which are supposed to provide factual information, then there is a problem. But is that really why you went to see Tron? Is the problem not with anyone who may have gone to see the movie – or turned to a religious text – with the wrong expectations, expecting it to be something it isn’t?

As a science fiction fan and a professor of religion, I find the image that sparked this post interesting, but I am also concerned that it perhaps simply plays into the hands of those prone to fundamentalism. There have been those who have criticized science fiction itself because of individuals and groups that seem to take its depiction of the future, or of aliens among us, as literally true.

Isn’t it more helpful to emphasize what sci-fi and religious texts are and are not capable of, what they can and cannot legitimately be used for?

Is that what the poster image shared above does? Or does it reflect the problem more than the solution? What do others think?

March 17, 2012 Why is the Futurist Interpretation of Revelation so Popular?
Recent Comments
7 Comments | Leave a Comment
Browse Our Archives
get the latest updates from
Religion Prof: The Blog of James F. McGrath
and the Patheos
Progressive Christian
Channel
POPULAR AT PATHEOS Progressive Christian
1