The Seven Spirits of God and Heavenly Bureaucracy in the Book of Revelation April 19, 2012 James F. McGrath

A few weeks ago we began working our way through the Book of Revelation in my Sunday school class. Two points that I drew attention to in the text relate to the same theme of the cosmology of the author and readers, with its heavily populated spiritual and celestial realms.

Right in the first paragraph, the author describes the book as a revelation given by God to Jesus who gives it to an angel who gives it to the author who will send it through messengers to churches where someone will read it aloud so that it can be heard by others.

In other words, mediation features prominently.

Once we reached the letter-style opening, we then encountered one of the first really puzzling details for most readers today – the reference to the “seven spirits of God” (Revelation 1:4).

The seven spirits, featuring where other (and in particular later) creeds would refer to the Holy Spirit in the singular, are presumably a reference to something analogous.  As Gabriel Bucur discusses in his book Angelomorphic Pneumatology (see my review in RBL), the most natural way to understand this reference is as to the idea of seven principal angels found in Judaism and in some early Christian texts. (When we looked up the names traditionally given to them, the reference to an archangel Raphael led naturally to speculation about archangels with names like Leonardo, Michelangelo and Donatello). In this period, the domain of God blended into Wisdom/Word/Spirit which blended into seven archangels. It would take some time before all this was standardized among Christians. 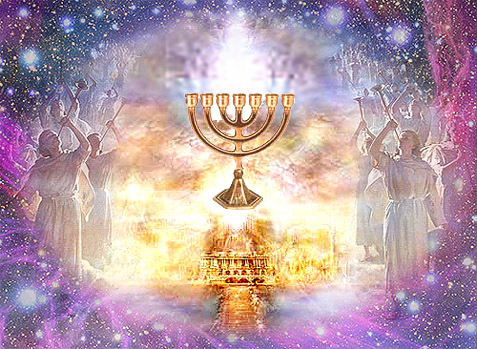 The ancient worldview that Revelation reflects imagined a cosmic bureaucracy akin to that in empires. There might be one supreme emperor, humor or divine, but on a day-t0-day basis one dealt with lesser functionaries. And so the structure of religion between Jewish “monotheism” and “pagan polytheism” was in this period at best a matter of where authorized worship was directed, and not a statement about the populousness of the cosmos or the amount of celestial red tape that might clog up its effective working.

As we concluded our treatment of that aspect of the first chapter of Revelation, we touched on the subject of whether it makes sense to believe in angels today. I mentioned Frank Peretti’s novels, and a quote that I’ve shared here before but still cannot trace the source of, which asks why, if Christian texts such as Revelation depict victory through self-sacrifice, Peretti and others depict spiritual warfare as resembling a slightly Christianized version of He-Man vs. Skeletor.

Of related interest, there is a video available online of a masterclass on the Book of Revelation taught by Elaine Pagels.