BLT shared this wonderful remake of a famous scene (when the media reported prematurely and incorrectly that “Dewey Defeats Truman”:

It was inspired by this bit of misreporting, which Jim West shared a screenshot of on his blog:

If you have been hiding under a rock somewhere and still don’t know what this is about, the news broke earlier today that the United States Supreme Court upheld the constitutionality of the Obama healthcare reforms, known as the “Affordable Care Act.”

Most liberals – and pretty much everyone not indifferent to the situation of the poor – are pleased with the ruling – as are those who embrace mainstream science and medicine. Many (but by no means all) conservatives are dismayed, and some will continue to rant about “socialism.” But if those conservatives actually knew anyone even merely with socialist leanings, they would know that such people will say that these reforms do not go nearly far enough.

Joel Watts kindly shared a link to the entire ruling.

Let me conclude with an image that puts this whole matter nicely in perspective: 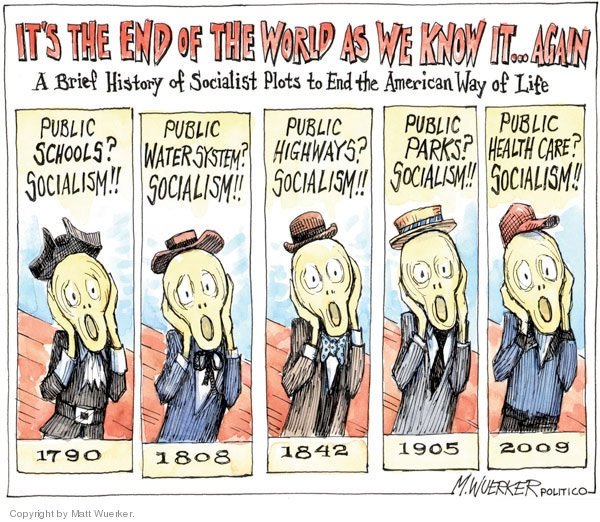 Except, of course, that the new legislation does not in fact nationalize health care – a more thorough solution that the United States still seems not to be ready for.

June 28, 2012 How Many Young-Earth Creationists Accept Genesis 1:16 Literally?
Recent Comments
13 Comments | Leave a Comment
"Under the old covenant (ten commandments), people were (and still are) racists and sexists. For ..."
Herrnhut Was Jesus a Racist?
"Reconciliation is a two-way street, restoring a broken relationship between two people. God does indeed ..."
Iain Lovejoy Forgive Us Our Debts, Not Repay ..."
"Excellent. God is not, and does not want to be, an accountant; keeping a ledger ..."
Harvey James Johnson Forgive Us Our Debts, Not Repay ..."
"Don't confuse forgiveness with reconciliation. Jesus tells us to forgive people who sin against us, ..."
Derek Thompson Forgive Us Our Debts, Not Repay ..."
Browse Our Archives
get the latest updates from
Religion Prof: The Blog of James F. McGrath
and the Patheos
Progressive Christian
Channel
POPULAR AT PATHEOS Progressive Christian
1