Rise of the Planet of the Satanazis

Rise of the Planet of the Satanazis June 28, 2012 Fred Clark

Some say that America is under attack by Satan himself.

Liberals have been duped by Satan:

All of these things are signs of the depraved mind to which God gives people over when they choose not to recognize Him. The Cornwall Alliance is trying to call attention to these things to show particularly how they are dominant in the environmentalist movement. … Hierarchically it’s God, then humanity, then the earth. The environmental movement turns that upside down just as Satan did.

There’s “something Satanic” about opponents of drill, baby, drill:

I have great difficulty understanding why, here in the United States, 300 million people have more or less acquiesced to the refusal to drill our own oil. … It just seems to me that there’s something Satanic about this.

Lady Gaga is “satanic” and “a kind of devil”:

There has been much talk of devil worship, much hand-wringing and finger-pointing as the American pop star makes her way across Asia. Faithful Filipinos campaigned to ban the Born This Way Ball tour but settled for a small-scale protest. Concerned Christians in Seoul deemed her show pornographic, successfully pushing to make it an “adult-only” event. There has since been weeks of worrying about the corruption of Indonesian souls, so much so that the country’s Religious Affairs Minister, Suryadharma Ali, saw fit to comment on the canceled show. “I strongly believe this cancellation will benefit the country,” he offered. 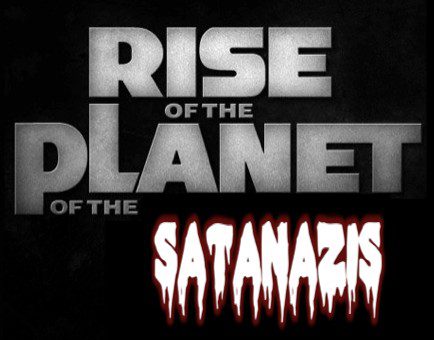 Gay animals have been possessed by lust demons:

It is entirely possible — we know from the Bible, for example, when Jesus cast the devil out of Legion, he went into a herd of pigs. … So, it is possible for demons or the devil to inhabit or invade animals just the same way they invade humans, and that causes the sin of lust.

The First Amendment is a “lie of Satan” against our “nation under God”:

We need a new president. We need to take out Planned Parenthood, we need to stop funding them, we need to make sure they are no longer operating in our communities. … The whole lie that we don’t need Christ. … I believe it’s a direct lie, it’s a lie of Satan himself, because he wants to discourage us and because he doesn’t want out nation to be a nation under God.

President Obama has come out of the closet, so to speak, with his announcement that he’s now for brideless or groomless “marriage.” But he didn’t come out alone. He brought Jesus with him, citing Christ as his inspiration for directly attacking God’s moral order. It’s one thing to be a hypocrite, which Mr. Obama has been for years. Since he began pretending to oppose the redefinition of marriage but refusing to defend the federal Defense of Marriage Act while homosexualizing the military. It’s quite another thing, however, to invoke Christ when doing the devil’s work.

The people that would wipe out the homosexuals in our country are using them and aligning with them today to gain power and if they gain power they would immediately kill all the homosexuals. You think that doesn’t make any sense, the devil doesn’t make any sense. He doesn’t care about making sense. … Many of those who are being used, right now, I believe by the Devil, evil forces in the world that are trying to bring America down, if those forces took over America they would be the first ones to be killed.

Planned Parenthood, gay rights and environmentalism? “The work of Satan himself“:

We remind Satan of the God that he hates and so he wants to stir up in human beings the same kind of hatred for humanity that he has. And he’ll use Planned Parenthood to do it, he will use the pro-abortion movement to do it. He will use the pro-gay movement to do it because you can’t get human beings out of the homosexual lifestyle; it’s not possible so that’s one way to slow population growth. He can get there through the environmental movement which is flatly opposed to population growth and actually proposes abortion policies as a way of reducing pressure on the environment. So anywhere you see that anti-human agenda, you are looking at the work of Satan himself.

Others warn that America is threatened by Nazis and the rise of a new Hitler.

Kathleen Sebelius — the architect of the HHS mandate that forces Catholic institutions to pay for drugs that murder babies — follows the path of Hitler’s SS leader, Heinrich Himmler, in the grand scheme of Obama’s death agenda.

Radical gay activists long for the days of Hitler:

It’s obviously disingenuous when they say marriage equality for everyone and I was just pointing out the fact that it really isn’t marriage for everyone, it’s a special kind of marriage for radical gay activists. They want to impose their will on the culture and if you cannot reproduce you may try to recruit, and what I mean by that is what is going on is an attempt to reshape, refashion the mind, hearts and desires of the next generation. Many Christians are sitting back and we aren’t speaking out, but the reality is just like during the times of Hitler we have people coming after one group after another group after another group. …

In 1939, Germany established gun control. From 1939 to 1945, 6 million Jews and 7 million others, unable to defend themselves, were exterminated.

Eric Metaxas is just like Bonhoeffer, so health insurance parity for women must be just like Hitler:

Bonhoeffer was one of those who was trying to call the church to be the church and to say that if the church doesn’t recognize the threat and fight, together, we will lose. And it’s important that every American understand that this HHS mandate is a threat to the United States of America.

But only a few see the horrifying, insidious truth — the monstrous hybrid threat of the Satanazis!

The Satanic baby-killers are perpetrating a Holocaust:

We will vilify those who collaborate with the child-killers … we will dismiss those who offer trite gimmicks in place of definitive action; we will expose and mock those who present tawdry fundraising schemes as a means to end this holocaust.

The IRS does the work of Satan, just like Hitler:

How does Satan always work? False information and intimidation and fear. … We can see other countries around the world and the direction they went in when they limited Christian speech and in effect, de-Christianized themselves. [Spoken over B-roll of Hitler speaking at a rally]