On his talk show, Mike Huckabee had the following to say about the shooting in Aurora, Colorado (that link goes to the Fox video; there are excerpts in print here):

Ultimately, We don’t have a crime problem or a gun problem – or even a violence problem. What we have is a sin problem. And since we ordered God out of our schools and communities, the military and public conversations, you know, we really shouldn’t act so surprised when all hell breaks loose. 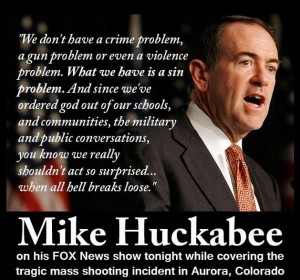 I find Huckabee’s analysis (which others have also voiced), far from being a call to appropriate religious introspection, an attempt at blame-shifting. American life and society is more infused with Christianity than just about any other in the world. And yet the secular, “godless” societies of Europe for the most part do not see anywhere near as many shooting deaths in their countries as the United States does.

And so let me offer a challenge to Huckabee and other Christians who try to shift the blame onto the removal of God from public schools (see too my recent posts about whether the shooting has anything to do with the teaching of evolution). Other societies far more secularized than we are do not have the same problems to the same extent as we do. And so why not take this opportunity to ask about America’s real sin problem?

And what is that problem? It would be too easy to point out that large numbers of Christians in the United States are full participants in American gun culture. As news reports both old and recent have indicated, other countries (like Switzerland and Canada) share or exceed Americans’ love of guns, but still do not see the numbers of shooting deaths that we do. While there is something puzzling about Christians loving guns, that in itself does not seem to be the heart of the problem.

The biggest difference between us and those other countries which excel us in secularism, and yet do not share the extent of our problem with murder and violent crime, is our own indifference to the poor, and the ever-growing gap between rich and poor in our society, not only in terms of income but also in terms of access to everything from basic daily necessities to health care.

Poverty and wealth are something that the Bible talks about regularly, and not just in Old Testament texts like the laws in the Torah or the Book of Amos. It is an issue that is addressed in relation to the values and expectations of the Kingdom of God in the New Testament. Yet it is such an enormous blind spot in the US, that many Americans actually oppose even minimal attempts to change things for the better, somehow mistaking their own capitalist values for something the Bible teaches rather than condemns.

There is some evidence that societies with significant poverty witness more crime, and that there is a connection between a wide gap between extremes of rich and poor and violent crime. But even if that isn’t the solution to America’s leadership in the number of fatal shootings we see each year, it is still something the Bible addresses. And we won’t know how this might affect other aspects of our society unless we actually begin to do what we’re supposed to, and address our “sin problem.” This seems like as good a place as any to start.

We read nothing in the New Testament about early Christians trying to impose their beliefs on the Temple in Jerusalem or in pagan temples around the Roman Empire. But we do read about them sharing all their belongings in what has been described as a form of “love communism.” I don’t think that exact model fits our modern setting. But even the underlying principles behind their practice of sharing possessions, the belief that eliminating the gap between rich and poor is what God desires, is something that American Christians have abandoned in favor of the Gospel of materialism, of consumption, and of wealth.

We do indeed have a sin problem. And it is time to repent, instead of trying as usual to use the issues of the “culture wars” to try to distract from what our real national sins are.