On Facebook, Karl Giberson shared a link to a blog post with statistics about retention in religious and areligious groups, i.e. their effectiveness in passing on their worldview and communal identity to their children. Here is the relevant chart: 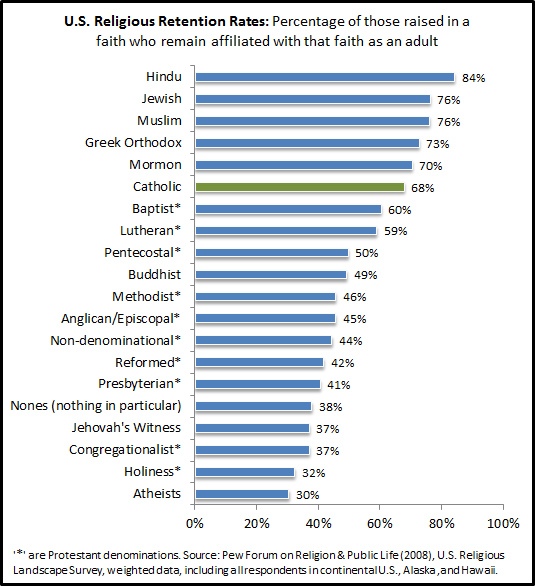 There is a lot that is interesting and potentially worth talking about. I suspect that for some of the lower-ranked denominations, it may be that their dwindling numbers make it challenging to retain any sense of community.

The lack of much in the way of communal structures for atheists has been discussed from time to time, and may account for why atheists are so low down on the list.The groups that are at the top of the list are ones where there is a close connection between a particular cultural-ethnic identity and the religious worldview.For progressive and liberal Christians, there are important questions to ask. While some of us are emphasize (either individually or as part of a denominational emphasis) individual decision and personal commitment to faith, others have explored the route of embracing the role of being a cultural religion. As I have suggested in the past, the model of Reform Judaism is one that ought to be thoroughly explored and discussed as a paradigm for progressive and liberal Christianity.

It seems to me that it may not be necessary to choose between the two.

There is no particular reason why the same community cannot foster the need for an individual to make eir own personal decision, and offer a community where people share certain core values and practices which do not necessitate that everyone who participates in the community agree.

Since this blog has readers who represent a wide range of worldviews, including Christians, Jews, agnostics, atheists, and many others, I would be interested to hear from you on this topic. For one thing, if you are a “none” or even if you are connected with a religion, do you care if your children shift identities? And if you are part of a group for whom passing on your worldview to the next generation is important, do you have any thoughts on what this chart might have to say that is helpful when it comes to doing that effectively?