Yesterday’s episode of Fringe, “Anomaly XB-6783746,” had a less explicitly theological focus than the one before it. But it raised crucial questions of another sort: what makes a human being, what does it mean to be an animal, and what does evolution have to do with it – whether evolution that occurs naturally, or resulting from our future interventions in our genes to direct and shape our biological and technologically-enhanced natures?

There are MAJOR SPOILERS AHEAD, so do not read on until you have seen the episode.

The episode focused on the “child observer” who is being called Michael. In what is arguably the most interesting and most crucial scene in the episode, we learn that, according to Windmark, he is not a “child” but an “anomaly” (the one mentioned in the episode’s title). And like all anomalies, he would have been destroyed, but before that could happen, he went missing.

This moments after Windmark, seeing that Nina and others had experimented on Observers, called us, today’s humans, “animals.”

Nina offers a great and courageous reply – she says that in studying the Observers, they had learned why they tilt their heads the way they do. It is an instinct to aid hearing, also found in lizards. In modifying human nature, future humans did not only make improvements to intellect, but they also re-activated much more ancient genetic information – and overrode emotions, as we learned earlier in this season. Lizards and Observers, Nina suggests, have a lot in common, including the inability to form bonds with others, and the inability to recognize something greater than themselves.

The Observers, she proposes, are more appropriately called “animals” than today’s humans.

The truth is that we and any future biological descendants we may have are and will be “animals.” But Nina’s insight is still an important one. Our ability to envisage transcendence, to love, and all these other things are things that enrich our lives as human beings. We set them aside in our quest to “perfect” ourselves at our peril.

This detail about lizards offered a more realistic treatment of evolution than one tends to find on TV (think Heroes). It isn’t linear “progress.” In the process of tinkering, we are liable to reactivate the old and not just bring about the new. 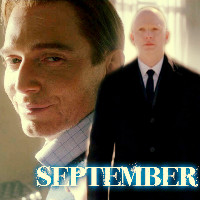 The major revelation at the end of the episode, that “Donald” is “September,” may provide an important clue about what lays in store in the last few remaining episodes.

It suggests that, rather like Peter turned back from being transformed into an Observer, it is possible for those who have either always been Observers or have been thoroughly changed in the way Peter almost was, to nonetheless be transformed to become more like current humans. This suggests in turn that the solution to the invasion may not be to “defeat” the Observers so much as to redeem them, to win them back to being human.

If so, the show is heading for a “Return of the Jedi” type of ending. The solution is not to kill the enemy but connect with his dormant and buried humanity.

This would explain why “Michael” is so important. He is an empath, and so may be able to communicate emotion to Observers despite their brains having been rewired in a way that suppresses that aspect of human life.

Did you see the episode? What did you think of it?

December 22, 2012
I'm Betting This Sheep Wasn't Brought Along to the Manger
Next Post

December 23, 2012 Christmas Lights
Recent Comments
0 | Leave a Comment
Browse Our Archives
get the latest from
Religion Prof: The Blog of James F. McGrath
Sign up for our newsletter
POPULAR AT PATHEOS Progressive Christian
1