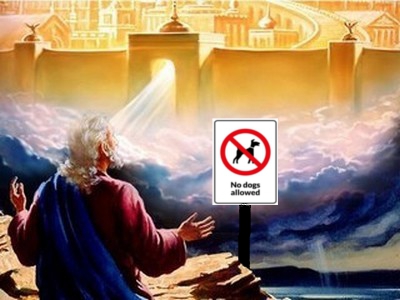 Revelation 22:15 got a mention in my most recent Sunday school class, even though we weren’t up to that passage. That text mentions that outside the New Jerusalem are “the dogs” as well as a variety of clearly human sinners. One person in the class asked whether this means that God is a cat person. (I was very tempted to subtitle this post “Is God a Cat Person?” rather than going with “No Dogs Go To Heaven,” which alludes to the movie title that suggests the opposite).

Some have suggested that the reference to “dogs” has in view male prostitutes, as seems to have been an expression, if Deuteronomy 23:18 is anything to go by. That is not implausible, although neither is it unambiguously what the author of Revelation had in view.

Be that as it may, I think there are two more interesting points to discuss in relation to this text than the exclusion of dogs – whether literal or metaphorical.

The first thing to note is that those who are excluded from the New Jerusalem (apart perhaps from the dogs, if they are literal) are all people who do certain things. This ties in with a strong emphasis in the depiction of the final judgment in Revelation 20 (the actual passage we did get up to this past Sunday in my class) that judgment is not only explicitly but emphatically based on what people have done. The text says it several times.

Yet it also mentions a Book of Life, which is also depicted as definitive with respect to the final judgment.

It is in this passage more than any other that the argument for Revelation being a redaction of an earlier, already-existing apocalypse, seems strongest. The reference to “another book” after a mention of “books” is awkward, and an explanation in redactional terms seems like a fitting solution.

But either way, it is not as though the contrast is between “a book containing a record of deeds” (and thus judgment by works) on the one hand, and “justification by faith” in the Lutheran sense on the other. The Book of Life is connected throughout the book with those who refuse to worship the Beast. And so even after whatever redaction was done, it remained the case that what one does and does not do still mattered to the author. If it did not, the reference to books recording deeds and judgment according to what one has done could have been made to disappear. The author simply thinks that siding with the Lamb against the Emperor is decisive in a way that no other actions are. But what one does is still crucially important to the author, and the basis of God’s judgment. The idea that one gets to participate in the eschatological kingdom simply on the basis of “faith” in the modern sense is not something the author says. And so it is no wonder Luther thought that Revelation shouldn’t be part of the canon.

The other major thing to note in chapter 22 is that there seem to be people (as well as or including “dogs”) still around outside of the city. If all sinners and evildoers had been consigned to the lake of fire, then who could these people be – whatever one may wish to say about their pets?

The Book of Revelation is surprisingly non-final, given how it tends to be interpreted. Either a lot more of it is symbolic than is admitted by many interpreters, or it envisages a situation in which, even after the dawn of the Kingdom of God, it is still possible to rebel.

And if that is the case, then presumably it is also still possible to enter. And that is something that deserves more attention than it often gets when the interpretation of the Book of Revelation is discussed.